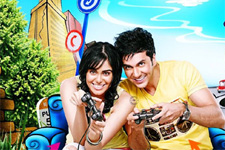 Nupur Barua / fullhyd.com
EDITOR RATING
3.0
Performances
Script
Music/Soundtrack
Visuals
4.0
3.0
4.0
5.0
Suggestions
Can watch again
No
Good for kids
No
Good for dates
No
Wait for OTT
No
In recent news, Sanjay Dutt's family is seeing red because small time filmmakers have been announcing their projects, present and future, with the convicted actor. This unethical means of publicity is not something the Dutt family is comfortable with, apparently.

However, they should cut the culprits, especially the makers of Hum Hai Raahi Car Ke, some slack. If it was not for Sanjay Dutt, the makers of the movie in question would not have been able to buy billboard space to put up the film's posters across cities. The only reason anybody even knows this movie exists is because there is a Sanjay Dutt, and the events in his personal life can only add to the number of tickets sold on the basis of curiosity, or even sympathy.

Hum Hai Raahi Car Ke is a road movie. Two childhood friends, Priyanka (Adah Sharma) and Shammi (Dev Goel), embark on a seemingly harmless two-hour drive to Pune, from Mumbai, on the night of New Year's Eve. As they set out, they are faced with the possibility that the trip may end in romance, although neither admit it.

However, the duo does not complete the journey in the stipulated time, since they are brought face-to-face with various characters and incidents that make it one crazy night. And the hint of romance now overpowers their basic reasoning and relationship.

The story has no logic. What could have been a fun-filled road trip becomes, instead, a sham of a movie trying to pass off as a romantic comedy. And comedy is the key word here, since there is none of the wit and humour that one associates with intelligence. Slapstick is an understatement. The humour falls so flat that you may wake up with a start because you were snoring when Chunky Pandey did his gurkha act.

Speaking of which, stereotypes are rampant in the movie. Every character is a popular representation of the people we used to laugh at in the 1980s and 1990s, when we were less politically correct, and not exposed to the implications of labelling people. We may have matured as an audience since then, but the makers of this film obviously have not. From the south-Indian nurse to the paan-chewing north-Indian doctor (Juhi Chawla), and from a Sikh dhaba owner to a not-so-smart police officer (Sanjay Dutt), you have all sorts in this film.

And then there is the gorilla. Why on earth is a man in a gorilla costume a gag that most filmmakers think will leave the audience in splits? This gorilla is in a jungle, and there is a scene in which it ends up marking its territory near the place where Shammi answers the call of nature. The animal chases the man, and so on.

Plus, there are villains in Spiderman costumes, who bumble their way through the criminal world. In short, the director and writer try too hard to get you to laugh.

Adah Sharma is best suited to looking glazed and traumatised in movies like 1920. This chirpy, bubbly avatar can get on to your nerves. She is, however, the better actor of the duo.

Dev Goel speaks in a monotone, and sounds like he is dubbing for a children's film. He grins and smiles all the time, in an attempt to look desirable, no doubt, but he does nothing to pay homage to the actor after which the character is named (Shammi Kapoor).

Juhi Chawla is a breath of fresh air, but she has very little screen time. Ditto for Sanjay Dutt, who at least tries to act. The other actors are wasted, overexposed and do not deserve either this movie or a mention in the credits.

Hum Hai Raahi Car Ke is the perfect example of what a movie should not be - the production and costume designs, the cinematography, the music and the editing - all are below average. To be fair to the makers, some of the gags work, but the acting lets down the intention (to make the audience laugh). As the movie progresses, the story deteriorates, and the inanity of the movie may see audiences walk out.

ADVERTISEMENT
This page was tagged for
hum hai raahi car ke hindi
Hum Hai Raahi Car Ke hindi movie
Hum Hai Raahi Car Ke reviews
release date
Dev Goel, Adah Sharma
Follow @fullhyderabad
Follow fullhyd.com on
About Hyderabad
The Hyderabad Community
Improve fullhyd.com
More
Our Other Local Guides
Our other sites
© Copyright 1999-2009 LRR Technologies (Hyderabad), Pvt Ltd. All rights reserved. fullhyd, fullhyderabad, Welcome To The Neighbourhood are trademarks of LRR Technologies (Hyderabad) Pvt Ltd. The textual, graphic, audio and audiovisual material in this site is protected by copyright law. You may not copy, distribute, or use this material except as necessary for your personal, non-commercial use. Any trademarks are the properties of their respective owners. More on Hyderabad, India. Jobs in Hyderabad.