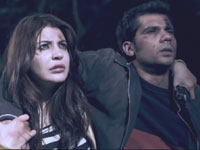 Nupur Barua / fullhyd.com
EDITOR RATING
7.0
Performances
Script
Music/Soundtrack
Visuals
8.0
7.0
7.0
7.0
Suggestions
Can watch again
Yes
Good for kids
No
Good for dates
No
Wait to rent it
No
Anushka Sharma is very passionate about her responsibilities as a member of the film industry. With her first film as producer facing minimal bleeps (thanks to the ambiguity in the rules of the Censor Board), and earning an "A" certificate, she has just this to say - reality is far worse. Avoiding controversies before releasing a film is a given, but she insists, along with director Navdeep Singh, of Manorama Six Feet Under fame, that restrictions imposed on what can and cannot be shown takes away the authenticity in a hard-hitting film. Despite those very restrictions, however, NH10 manages to drown you, almost, in a wave of helplessness, as you relive yet another scenario in India that argues that this country needs to wake up, and fast.

Meera (Anushka Sharma) and Arjun (Neil Bhoopalam) are happily married, and trying to adjust to life in Gurgaon, especially Meera. As she points out at a party that she does not want to be in, Bangalore is way better, even if the nightlife ends before midnight. After receiving a call from her office, Meera leaves the party to sort out some issues at work. It is late night, and because it is Gurgaon, Meera finds herself harassed by some men who break the window of her vehicle, with the intent to kidnap and rape, probably. She escapes, but the incident shakes her. The police politely blame her for being out alone at night, and Arjun immediately applies for a gun licence for her.

Observing her mood swings, Arjun decides to take her out of town for the weekend, and coincidentally, her birthday is coming up. The couple drives out of the city, and are slightly confused about the road they have to take. They stop at a roadside eatery, and that is the beginning of a drastic alteration to their existence. A young man (Darshan Kumar) and his cronies arrive in an SUV and forcibly drag a young couple away. Arjun intervenes, and is slapped in the face by the goon - the girl is his sister, and he has decided to punish her for daring to marry against his family's wishes.

Something snaps in Arjun, and when he comes across the SUV parked in the wilderness later, he decides to investigate, much to Meera's dismay. Arjun is convinced that the goons are rustic and idiots, and deserve a talking-to. He thinks that having a licensed gun will solve problems. His naiveté places his wife and him in danger, and they spend the rest of the night trying to outsmart the gang, who are hot on their trail. Things spiral out of control when Meera and Arjun, having lost their cell phones, car and everything else, decide to fight back, not knowing that this part of the country does not believe in democracy, and that standing up for one's rights is a myth that people have heard but do not believe in.

Since the trailer of the film makes it very clear that grittiness and brutality are a major part of the story, the director does not spend too much time with the niceties of society. He establishes Meera and Arjun as a couple in love, but also gives them the status of outsiders (from Bangalore), and therefore ignorant of the law of the land here. He tells us how idealistic it is to believe that civilised behaviour, the sort that is acceptable in the city, will sustain a person on the outskirts of the same city. Meera and Arjun cannot shake off their "niceness", but as they travel deeper into the rural area, the brogue and attitude of the people they meet get coarser and more savage.

To drive home the point of the couple's futility in imposing their standards on these people, we are introduced, briefly, to another couple, also outsiders, from Bihar. They are labourers in the quarry, and because they need to survive, they are obsequious in their dealings with the locals. This is not something Meera and Arjun understand because they are armed with the security of privileged lifestyles, education, steady jobs, and, of course, a gun.

Meera branches out on her own in the course of the night, to find help for her injured husband, and chances upon a village in which all the doors are locked, because the locals are being entertained by the story of Savitri, enacted on a makeshift stage in a field outside the village. This irony is emphasised further when Meera's Savitri, as dedicated to her spouse as the mythical heroine, cannot find a single sympathetic ear as she tries to save Arjun's Satyavan. And to stress on the status of women in a place like Haryana, a performer on stage has to ask an elderly man not to break out into a leery jig at the mention of Savitri, who is otherwise revered and worshipped in other parts of the world.

The screenplay does not delve too deeply into the status of women, however. It takes for granted that in this little village, representative of many such populations in most of India, a woman is an object, or an inferior sub-species to man. So there are no long and preachy dialogues on what a woman's rights are. Not even when it is established that women are in this position today because women themselves endorse the superiority of men. It is more a story of survival in the face of barbarism and savagery. And to beat them, you have to join them, or so the script says.

NH10 is not even a feminist movie. True, it has a woman-centric narrative, but she is treated, thankfully, as a human being who is pushed to her limits because of the bizarre situation she finds herself in.

The dialogues in Haryanvi are a tad difficult to follow for those not familiar with the dialect. The curse words are not shocking at all, which says a lot about our evolution as a nation. There are some inconsistencies that are apparent - such as Arjun's uncharacteristic temper, and the erratic graph of emotions in all the characters. The sense of urgency is underplayed, and this makes the movie slightly tedious. The ennui that Meera and the main villain display at various intervals breaks the flow of an otherwise gripping film. The last bit is almost predictable, especially if you have watched the Hollywood movie Eden Lake, and the climax is a dampener on the thrill of the chase that you have watched so far. The end may leave you feeling unsatisfied.

Anushka Sharma is passionate, as mentioned earlier, and it shows in her acting. She tries her best to be Meera, and succeeds, almost. There is nothing wrong with her performance, and her vacant expressions are worth noting. However, the dialogues she has to deliver do not resonate with her body language at times. She has performed her own stunts, and the result is a knee injury, after having run around on uneven terrain at night. Watch out for the scene in which she smokes calmly as she watches her enemy struggle - the angry young woman, and reminiscent of Amitabh Bachchan in his younger days.

Neil Bhoopalam as Arjun immediately wants you to invest in him as a character. He plays it well, and is the most endearing of the lot. Darshan Kumar makes a mark, again, but is very restrained as the evil man. Ravi Jhankal hits the nail on the head as the lecherous maternal uncle. The surprise is Deepti Naval, playing a character that she has never attempted before. She is maternal and menacing at the same time, and with her appearance on screen, towards the end, overshadows the other events in the movie.

The film is shot on raw locations, mostly Rajasthan, and the production design stresses on the barrenness and hopelessness in the geography of a people who are unhappy and violent. The story is set in Haryana, but the visuals of Rajasthan - dried up vegetation, broken roads, narrow lanes, sparse trees, dust - work well to make the look effective, and believable.

The costumes are practical and ordinary, just like the people in the movie. The cinematography is terrific in parts, especially in the action (more realistic than that shown in most movies). The middle portion of the movie drags a bit, and snappier editing would have helped, especially since everything happens in the span of one night, and there are not too many variations in visuals. The music is good, and deserves to be listened to again without the distraction of the movie playing out with it.

NH10 is about violence, and the disdain that people have for the law. What we lay stress on in developed urban areas, as far as our rights are concerned, makes us believe that we are immune to injustice. In the rustic lands of Haryana, the laws do not apply, and people have their own system of justice. We read it in the papers all the time, so watching a movie about it is not going to shock you. Which is why you must watch it - to understand how disparate the different parts of the nation are.
Share. Save. Connect.
Tweet
NH10 SNAPSHOT 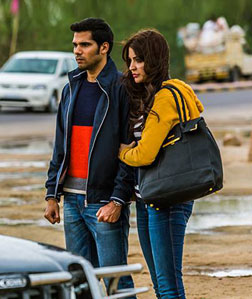 ADVERTISEMENT
This page was tagged for
nh10 movie
nh10 movie kickass movies
NH10 hindi movie
NH10 reviews
release date
Follow @fullhyderabad
Follow fullhyd.com on
About Hyderabad
The Hyderabad Community
Improve fullhyd.com
More
Our Other Local Guides
Our other sites
© Copyright 1999-2009 LRR Technologies (Hyderabad), Pvt Ltd. All rights reserved. fullhyd, fullhyderabad, Welcome To The Neighbourhood are trademarks of LRR Technologies (Hyderabad) Pvt Ltd. The textual, graphic, audio and audiovisual material in this site is protected by copyright law. You may not copy, distribute, or use this material except as necessary for your personal, non-commercial use. Any trademarks are the properties of their respective owners. More on Hyderabad, India. Jobs in Hyderabad.