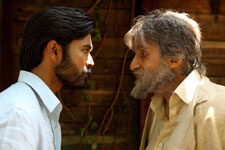 Nupur Barua / fullhyd.com
EDITOR RATING
6.0
Performances
Script
Music/Soundtrack
Visuals
7.0
5.0
6.0
7.0
Suggestions
Can watch again
Yes
Good for kids
No
Good for dates
Yes
Wait to rent it
Yes
R Balki worships the air that Amitabh Bachchan breathes, and that is no secret. His latest, Shamitabh, reminds us not only of this particular obsession, but also that to call Amitabh Bachchan a legend is an understatement. He has been in this industry for over four decades, and yet, with every film, he becomes more and more legendary. Shamitabh is also a commentary on the Hindi film industry, but more on that later.

First, the story. One-film wonder Daanish (Dhanush), whose screen name is Shamitabh, is celebrating the records that his movie, Lifebuoy, has broken. Celebrities such as Javed Akhtar, Ekta Kapoor and Mahesh Bhatt are already impressed by his performance and have only good things to say about the debuting young man, with an ordinary face and an extraordinary voice. When the media asks him how a village boy from Igatpuri has managed to reach this far, Daanish tells them all - from his obsession with acting since he was a mere boy, to his time spent, undetected, in a vanity van, right up to the time that a sympathetic assistant director Akshara (Akshara Haasan) saw beyond his average looks and realised his potential.

What he does not mention, however, is his only handicap - he is mute. With some help from Akshara's father's doctor friend, Daanish has a transmitter in his throat - it receives the voice of a second person, connected via an ear device, and transmits it, with some time delay, through Daanish's throat. All he has to do is lip sync.

Akshara and Daanish audition various voice artistes, but they zero in on a drunkard with a rich baritone. Amitabh Sinha (Amitabh Bachchan) is a rejected actor, who came to Mumbai 40 years ago, and lives as a paying guest of a graveyard caretaker. Daanish and Amitabh are two different individuals, but they become one for the silver screen, and Daanish rechristens himself Shamitabh.

The problem is that they both have massive egos, and despite their success, they have a problem working as a team. Daanish thinks it is his emoting that brings in the fans and the appreciation, and Amitabh is convinced it is his voice. Besides, Amitabh has to pretend to be Daanish's valet Robert so that he can be within range of the voice transmitter, and this is one status he does not want. Akshara goes away to write her script, but when she returns, she discovers that the two are not on speaking terms, and she needs to make her movie with Shamitabh. In the meantime, a curious journalist learns more about Daanish than he should.

Shamitabh is a surreal story. It is almost science fiction, to some extent (but then again, these days, with the technology we possess, anything is possible). It is a fascinating concept, but unfortunately, it is a weak story, at least in its writing. Once it is established that Amitabh will become Daanish's voice, there is nothing much going on. The tension between the two men could have been dealt with a little more sensitively. It seems almost forced, the ego hassles, and the narrative becomes erratic. Akshara tries to be the mediator, and mostly fails, but you are never quite sure just what the problem is.

Despite the innovative concept, it is difficult to accept the premise of the story at face value. To make matters worse, the director insists on explaining every nuance of the charade that the characters carry out. Nothing is subtle, which is jarring for a film that deals with subtlety and stealth, in a manner of speaking.

To be fair, there is more to Shamitabh than the story. The script and the dialogues are a commentary on our beloved Bollywood. The reference to Amitabh's rejection comes straight from the life of the real Amitabh Bachchan. As the older actor repeats a number of times, we live in a world where real talent is often overlooked, and mediocrity, if packaged well, sells better. As with Amitabh Sinha, true artistes are never given their due. On a lighter note, watch out for Rekha's reaction when she hears the voice of Shamitabh.

The story also has a moral - an oft-repeated one, true, but a relevant one nevertheless. It debates the concepts of immortality, friendships, relationships, ambitions, dreams, and, most importantly, of the ego and of arrogance. However, the meandering screenplay and the repetitive plot points make Shamitabh a movie that is not only told badly, but also loses focus, in the process of self-indulgence, on becoming better than it is. Ironically, that is the story of the two male characters, too.

What is also slightly unreal is the reference to the film industry without mention of the real Amitabh Bachchan. Balki is, as expected, indulgent when it comes to directing Amitabh Bachchan, and the movie is more about him than Amitabh Sinha, in a way. The climax is rather unexpected, for a story that seems to be going nowhere.

Amitabh Bachchan proves, again, that he is the only actor who can hold us with a monologue, no matter how lengthy and how repetitive. Most of the soliloquies are made with only him in the frame, but he is gripping. He acts out the drunkard with admirable nonchalance and confidence, given that he is a teetotaller in real life.

Dhanush, on the other hand, despite not having a single dialogue, and despite being given less importance, refuses to be overshadowed. It is he who fills in the gaps that even the Big B cannot fill, and you wish he was given a little more to do. His potential is not fully tapped in this movie, but he makes his mark, and how.

Akshara Haasan is a natural at playing the no-nonsense, non-mushy young girl with dreams. She is a bit awkward at times, and even gets carried away in the moment, but she could not have asked for a better film to debut in.

The costumes are slightly offbeat, and Akshara is always in black (a quirk of her character). The camera work is excellent, and rather dramatic. The songs are average, and Piddly has a catchy tune (the video ruins it, though, which is the purpose of the story). Also, this is the thousandth film that Ilaiyaraaja has worked in, and that counts for something.

Should you watch Shamitabh? Yes, we think. For all three main actors, but mostly for Amitabh Bachchan slyly ridiculing his USP - his voice. We are hoping that Balki releases a more defined cut for DVD and television, though, because the story lacks soul. You may leave the theatre slightly confused, but somewhat satisfied with the reminder that Bachchan is truly a legend.
Share. Save. Connect.
Tweet
SHAMITABH SNAPSHOT 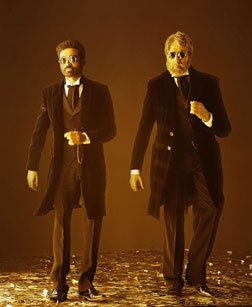 ADVERTISEMENT
This page was tagged for
Shamitabh hindi movie
Shamitabh reviews
release date
Amitabh Bachchan, Dhanush
theatres list
Follow @fullhyderabad
Follow fullhyd.com on
About Hyderabad
The Hyderabad Community
Improve fullhyd.com
More
Our Other Local Guides
Our other sites
© Copyright 1999-2009 LRR Technologies (Hyderabad), Pvt Ltd. All rights reserved. fullhyd, fullhyderabad, Welcome To The Neighbourhood are trademarks of LRR Technologies (Hyderabad) Pvt Ltd. The textual, graphic, audio and audiovisual material in this site is protected by copyright law. You may not copy, distribute, or use this material except as necessary for your personal, non-commercial use. Any trademarks are the properties of their respective owners. More on Hyderabad, India. Jobs in Hyderabad.