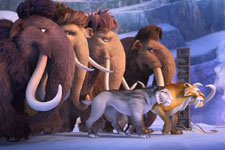 Kritika Deval / fullhyd.com
EDITOR RATING
4.0
Performances
Script
Music/Soundtrack
Visuals
6.0
3.0
5.0
7.0
Suggestions
Can watch again
No
Good for kids
Yes
Good for dates
No
Wait to rent it
Yes
Most filmmakers want their movie's title to show a deeper insight than the first glance reveals. It is a reasonable conceit. After all, it is no small accomplishment to immerse yourself into a project for months on end, even if it's done mostly on autopilot. This title, though, is insightful to an almost prophetic degree, as you'd be able to tell within the first half hour of watching the unstoppable downward spiral that is Ice Age: Collision Course.

It begins, as usual, the way the last film ends - with Scrat the saber-tooth squirrel's primeval chase after the elusive acorn. The last time that happened, it led to the Earth's crust splitting to lead it to the next level of its development. This time, though, the effects reach further from the planet, as Scrat ends up on a flying saucer that takes it into space, where it inadvertently sets a bunch of asteroids on a collision course with Earth.

And so we find Manny (Ray Romano) the woolly mammoth and his motley pack trying frantically to evade yet another extinction event that spirals quickly out of control while they also try to deal with the smaller problems that come with being alive and sentient. Even as Buck (Simon Pegg) the one-eyed weasel weasels out the secrets of a universe that is constantly trying to kill Earth and its fragile inhabitants, Manny is dealing with father-of-the-bride syndrome while Sid (John Leguizamo) the sloth gets dumped just as he's about to pop The Question.

While the Herd discovers an ancient stone monument that reveals the effects of asteroid collisions and how to deflect them, a pack of appropriately cartoon-villainish flying dinosaurs called Dromaeosaurs decide that their avian capabilities give them adequate protection from threats from the sky, and so go about their clumsy attempts at sabotaging Manny and the Herds' latest quest so all life could be annihilated, leaving Earth their sole dominion.

All of this must seem terribly exciting. After all, we're sure all of you have had at least one potty time existential crisis where you've wondered whether there was any meaning at all. This writer's personal nightmare involves a universe that came into existence because a celestial being sneezed. And it all makes so much sense if everything happened as a chain reaction because that's the most logical conclusion - everything beginning and ending all the time like a never-ending mushroom cloud of happenings that began with a quantum event. To be fair, though, this writer found musings over a Schrodinger universe to be far more fascinating that trying to follow a plot whose execution showed it about as much respect as someone who got their SO's name tattooed after the first snog.

Ice Age: Collision Course is one of those sequels, the kind that seem so very tired that you know the series will either die or go up from there. By this time most of its fans realise that the only real novelty to be found in these films is the premise. Even the draw of the previous films, i. e. the absolutely enchanting cast and moments of sublimated emotion created by their interactions, has devolved into a meaningless mess of inception of caricatures.

While the movie looks and sounds as divine as you'd expect, you can't expect to be drawn into the world with the same ferocity as the previous unless you're about four and this is your first experience with cartoons on a big screen. Mostly, you just find yourself trying to escape your ennui into "what ifs", or try to find some consolation in the infrequent moments of banana-peel humour thrown your way like scraps to alleviate starvation.

To conclude, this writer finds herself unequal to the task of being able to resist the temptation to point out the absolutely self-fulfilling nature of Ice Age: Collision Course.
Share. Save. Connect.
Tweet
ICE AGE: COLLISION COURSE SNAPSHOT 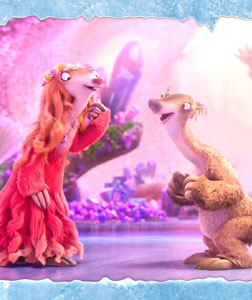 ADVERTISEMENT
This page was tagged for
Ice Age: Collision Course english movie
Ice Age: Collision Course reviews
release date
Simon Pegg, Adam DeVine
theatres list
Follow @fullhyderabad
Follow fullhyd.com on
About Hyderabad
The Hyderabad Community
Improve fullhyd.com
More
Our Other Local Guides
Our other sites
© Copyright 1999-2009 LRR Technologies (Hyderabad), Pvt Ltd. All rights reserved. fullhyd, fullhyderabad, Welcome To The Neighbourhood are trademarks of LRR Technologies (Hyderabad) Pvt Ltd. The textual, graphic, audio and audiovisual material in this site is protected by copyright law. You may not copy, distribute, or use this material except as necessary for your personal, non-commercial use. Any trademarks are the properties of their respective owners. More on Hyderabad, India. Jobs in Hyderabad.