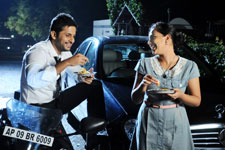 Ravi Kandala / fullhyd.com
EDITOR RATING
6.5
Performances
Script
Music/Soundtrack
Visuals
7.0
7.0
6.0
6.0
Suggestions
Can watch again
Yes
Good for kids
No
Good for dates
Yes
Wait to rent it
No
Summer brings forth a slew of mindless films that producers, directors and actors try to peddle in the name of holiday entertainment. Gunde Jaari Gallanthayyinde is, thankfully, not one of them. The movie is an entertainer that is not mindless, and definitely not full of violence or double entendres that would force people to keep their kids at home.

One of the bigger takeaways from Gunde Jaari Gallanthayyinde is Nitin's re-enactment of Pawan Kalyan's Un Dos Tres number from Tholi Prema. It is fun to see someone act out our childhood fantasies on the screen instead of in front of the mirror. Nitin, a self-confessed Pawan Kalyan fan, who has talked about how Tholi Prema is his favorite movie, uses Gunde Jaari Gallanthayyinde to proclaim all his adulation for the star. There is the famous interval scene of Khushi making an appearance, too. The whole idolising part is done pretty well, and is never overt or repulsive.

Gunde Jaari Gallanthayyinde has a decent enough storyline, a rarity in today's times. The film is about Karthik (Nitin), an analyst in a software company. Karthik falls in love at first sight with Shruthi (Isha Talwar) at his friend's wedding. He asks his friend, Pandu (Ali), to get her phone number for him, and plans to make her fall in love with him. A drunk Pandu gives him the wrong number, and Karthik ends up calling Sravani (Nitya Menon).

This confusion sets in motion a chain of events that cause a whole lot of twists in the lives of the Karthik and Sravani, ultimately leading to a happy ending.

Gunde Jaari Gallanthayyinde scores in the fact that it does not stress on melodrama. All conflicts are handled with a touch of humor. The light treatment of the story works nicely, and keeps each scene flowing into the next.

The script is quite well-fleshed-out, and Nitin and Nitya Menon help matters with some good chemistry and a lot of spontaneity. Nitin does not overact anywhere, and does a commendable job in the Un Dos Tres song imitating Pawan Kalyan. The fact that the audience cheer the loudest during the song also shows that the tribute is appreciated.

Nitya Menon is her natural self, and does justice to the meaty character she gets. Isha Talwar is most probably a model - she behaves like one through the movie, doing nothing but cat-walking and moving her lips to some words that do not definitely look like Telugu. Thankfully, her presence is limited.

Jwala Gutta's much hyped debut in a "SPECIAL song" is a damp squib. She looks older than Nitin, and totally awkward in her three minutes on screen. (Meanwhile, the only person afraid of her debut should be Namitha, since she is likely to give her serious competition in the size department.) Thagubothu Ramesh and other comedians do a good job of keeping us entertained.

The songs are all of the time-pass variety, and serve to show us some foreign locations. The technical departments all do a good job and do justice to the budget. The film is mostly set around Hi-Tech city and some of the city's famous nightspots, and manages to make Hyderabad look super hep.

All in all, Gunde Jaari Gallanthayyinde is a refreshing summer entertainer. A couple of mildly offensive gay jokes aside, the movie offers wholesome entertainment, and should be the perfect summer hit for Nitin, unless the older generation coming in next week decides to upset his applecart.
Share. Save. Connect.
Tweet
GUNDE JAARI GALLANTHAYYINDE SNAPSHOT 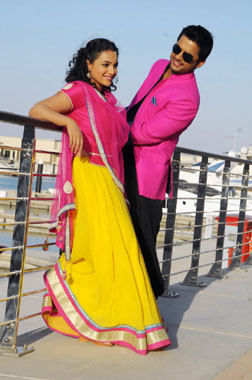 See Gunde Jaari Gallanthayyinde full details
TOP COMMENT
harshal on 30th Apr 2013, 10:09pm | Permalink
gud movie first half is good second half is slow but because of the comedy it is decent.
4
0
GUNDE JAARI GALLANTHAYYINDE USER REVIEWS
1 - 8 OF 8 COMMENTS
POSITIVE  |  NEGATIVE |  NEWEST  |  OLDEST  |  MOST HELPFUL  |  LEAST HELPFUL
USER RATING
8.0
3 USERS
Performances
Script
Music/Soundtrack
Visuals
NA
NA
NA
NA
Can watch again - NA
Good for kids - NA
Good for dates - NA
Wait to rent it - NA
2power10 on 1st Jul 2013, 12:19pm | Permalink
It's an okay film, not spectacular. It's pretty funny at times. The gay joke was completely uncalled for, and if you are watching the movie with family, it's horribly embarrasing. These movies set a bad example for youngsters who think you can start a romance over a wrong number.

However, Nitin has improved his acting - he was good in the proposal scene.

ADVERTISEMENT
This page was tagged for
Gunde Jaari Gallanthayyinde telugu movie
Gunde Jaari Gallanthayyinde reviews
release date
Nitin, Nithya Menon
theatres list
Follow @fullhyderabad
Follow fullhyd.com on
About Hyderabad
The Hyderabad Community
Improve fullhyd.com
More
Our Other Local Guides
Our other sites
© Copyright 1999-2009 LRR Technologies (Hyderabad), Pvt Ltd. All rights reserved. fullhyd, fullhyderabad, Welcome To The Neighbourhood are trademarks of LRR Technologies (Hyderabad) Pvt Ltd. The textual, graphic, audio and audiovisual material in this site is protected by copyright law. You may not copy, distribute, or use this material except as necessary for your personal, non-commercial use. Any trademarks are the properties of their respective owners. More on Hyderabad, India. Jobs in Hyderabad.