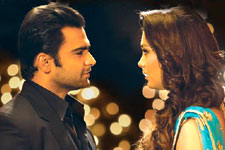 Kritika Deval / fullhyd.com
EDITOR RATING
4.5
Performances
Script
Music/Soundtrack
Visuals
4.5
5.5
5.5
7.5
Suggestions
Can watch again
No
Good for kids
No
Good for dates
Yes
Wait to rent it
No
Romance is good. Romance is great. It gets you all gooey inside and makes you reach out for your special someone. Or sink into depression if you don't have one. Whatever. No one said life is fair.

But then you have movies like Nee Jathaga Nenundali that start off at their gooey, campy best, and then collapse into a mess of the same goo and camp at the slightest hint of discord.

Let's begin with the story, even though the only way you don't already know something about it is if you are visually- and hearing-impaired and live in Siberia (the rest of us live with the abominable earworm that is the song Tum Hi Ho, as best as we can).

Raghav (Sachiin Joshi) is a has-been playback rockstar who now spontaneously finds himself in any bar in his vicinity that is close enough. In one such jaunt to a seedy bar in Goa, he encounters Gayatri (Nazia Hussain), who sings one of his own hits with great beauty, and with the kind of passion that he himself hasn't been able to muster for anything other than a bottle of whiskey lately. So he talks to her and convinces her that she is the next best thing, that she needs to quit her job and go home, and then proceeds to get himself beaten up and put into a coma for the next couple of months.

After a few false starts, he finally ensures that Gayathri's path to success is quite thoroughly paved, and, in the meantime, the two fall in love. All of this is really quite adorable even though the cuteness is mostly through the efforts of the director rather than because of any efforts on the parts of the thespians on the sets. But then it is easy to make pretty people look prettier when all they have to do is lip-sync to songs that proved to be hits even before the film released.

And then, things get difficult, and our leads suddenly find themselves having to actually act. You see, as was established way back at beginning, Raghav is an alcoholic for some reason, with no intention of changing... for some reason. He warns Gayathri - sweet, trusting, grateful Gayathri - off, and tells her to get away from him before he takes them both down, and then you can guess exactly everything that happens, and good on you. But we'll bet you can't predict how badly it all happens.

Then, too, there is the dichotomy of it all. There is something so strangely Bollywood about the whole thing that it feels like watching one of those Hindi soap operas that have been dubbed into Telugu, and it does not help that both the leads seem very uncomfortable lip-syncing.

The only aspect that makes the film bearable nevertheless is the fact that there is some fantastic camerawork happening throughout. And also, Sachiin and Nazia look really pretty.

The much-touted music of the film is exactly the same as that of its Hindi original, but with really awkward lyrics that need some getting used to if you're a fan of the original soundtrack.

The acting is pretty plastic overall, especially from the leads. Maybe there is a lesson in here. How about casting Telugu people to speak Telugu? It's not as if we don't have people good-looking enough to be mistaken for mannequins.

In all, Nee Jathaga Nenundali stands almost entirely on the feet of Aashiqui 2. Considering the fact that the writers went to the trouble of translating even the dialogues, and were still left with a film that looked as if it was dubbed from another language, they could very easily have dubbed the original and hit the pubs in time for the Happy Hours.
Share. Save. Connect.
Tweet
NEE JATHAGA NENUNDALI SNAPSHOT 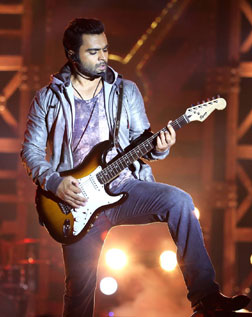 ADVERTISEMENT
This page was tagged for
nee jathaga hour songs telugu all movie
Nee Jathaga Nenundali telugu movie
Nee Jathaga Nenundali reviews
release date
Sachiin J Joshi, Nazia Hussain
Follow @fullhyderabad
Follow fullhyd.com on
About Hyderabad
The Hyderabad Community
Improve fullhyd.com
More
Our Other Local Guides
Our other sites
© Copyright 1999-2009 LRR Technologies (Hyderabad), Pvt Ltd. All rights reserved. fullhyd, fullhyderabad, Welcome To The Neighbourhood are trademarks of LRR Technologies (Hyderabad) Pvt Ltd. The textual, graphic, audio and audiovisual material in this site is protected by copyright law. You may not copy, distribute, or use this material except as necessary for your personal, non-commercial use. Any trademarks are the properties of their respective owners. More on Hyderabad, India. Jobs in Hyderabad.