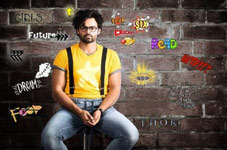 Ravi Kandala / fullhyd.com
EDITOR RATING
5.5
Performances
Script
Music/Soundtrack
Visuals
7.0
3.0
3.0
7.0
Suggestions
Can watch again
No
Good for kids
No
Good for dates
No
Wait for OTT
No
Sai Dharam Tej's introduction shot consists of him dancing to Made In Andhra Student from Thammudu. Midway through the first half, there's a song where he imitates Chiranjeevi's mass dances. Post the interval, there is a remix of Guvva Gorinka Tho, the classic Chiranjeevi-Bhanupriya song. At various points in the movie, Sai imitates Chiranjeevi's and Pawan Kalyan's dialogue deliveries and refers to their movies or fan following. By the end of the movie, you feel like getting up and telling him that you get it, he's from the mega family - and he needs to stop flaunting the pedigree like a trophy or a medal.

In addition to that irritation, Subramanyam For Sale is a mishmash of so many recent movies that you lose count by interval. The film begins with Sita (Regina) running away from her home to travel to the US and meet the love of her life. Once there, she finds out that the guy is a fraud, and is rescued by Subramanyam (Sai Dharam Tej). Subramanyam is a guy who does various jobs in the US and focuses on converting every minute of his life into dollars.

Sita starts working in a restaurant and gets admission to a university. Circumstances (read script writer and director) force Subramanyam and Sita to travel to India together, where Sita's family thinks he's their son-in-law and the two are forced to act along. What happens when the truth comes out forms the rest of the plot.

Since the plot has been seen about a few thousand times on screen, Harish Shankar focuses on adding as many comic sequences as possible. The comedy works seven times out of ten and keeps the film going. Logic obviously goes for a toss in many sequences, and it is funny to see Sai, who's puny by hero standards, beat up a dozen or more goons without breaking a sweat. Some sequences, like the first fight where a software employee is being chased by his boss and hired goons to prevent him from going to India, are outright silly.

Acting-wise, Sai Dharam Tej acts quite well in the comedy sequences, but he's so loud and speaks so much that it gets insufferable after a while. He also really needs to come out the shadow of his uncles - there's only so much Pawan Kalyan imitation you can get away with in a movie. He dances well, though. Regina Cassandra overacts in some sequences and is good in others. There is a plethora of others - Suman, Ajay, Rao Ramesh, Brahmanandam, Naresh, Pragathi, Jhansi and all the other staple characters in family movies in Telugu - and they all pass muster.

Good production values are in ample display what with a first half completely shot in the US and a lavish set through the second half. The music however is an earsore. We're still not convinced it is Mickey J Meyer who scored the music - it is so loud.

Subramanyam For Sale is an absolutely unoriginal product that is only good for a few laughs. And if you are still headed for the theatre, plug your ears with some cotton wool.
Share. Save. Connect.
Tweet
SUBRAMANYAM FOR SALE SNAPSHOT 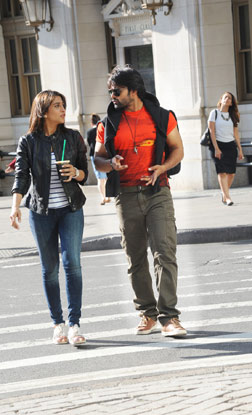 ADVERTISEMENT
This page was tagged for
Subramanyam For Sale telugu movie
Subramanyam For Sale reviews
release date
Sai Dharam Tej, Regina Cassandra
theatres list
Follow @fullhyderabad
Follow fullhyd.com on
About Hyderabad
The Hyderabad Community
Improve fullhyd.com
More
Our Other Local Guides
Our other sites
© Copyright 1999-2009 LRR Technologies (Hyderabad), Pvt Ltd. All rights reserved. fullhyd, fullhyderabad, Welcome To The Neighbourhood are trademarks of LRR Technologies (Hyderabad) Pvt Ltd. The textual, graphic, audio and audiovisual material in this site is protected by copyright law. You may not copy, distribute, or use this material except as necessary for your personal, non-commercial use. Any trademarks are the properties of their respective owners. More on Hyderabad, India. Jobs in Hyderabad.