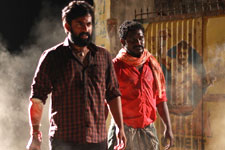 Kritika Deval / fullhyd.com
EDITOR RATING
5.0
Performances
Script
Music/Soundtrack
Visuals
5.5
4.0
5.0
6.0
Suggestions
Can watch again
No
Good for kids
No
Good for dates
No
Wait to rent it
Yes
Palasa 1978 begins with a disclaimer that it is a fictional account that does not aim to cause insult to any individual or group, and is an honest attempt at portraying the violence perpetuated by class and caste divides in rural Andhra. True to its word, the town of Palasa is populated with a vaguely defined upper caste of land owners, and an equally vaguely defined lower caste that appears to be responsible for basically all the work - both honest and dishonest - that happens there.

The movie also purports to explore the effects of caste through unraveling the case of one murder that happened in the past, which is where the whole thing hits a snag. You see, within five minutes of your sitting down to watch Palasa 1978, two people die on the screen. We mention this not to pass judgement on the level of violence in this movie, but to point out that it takes some doing to keep the audience interested in the resolution the death of a particular character when the people around them keep dropping like flies.

The story follows the lives Mohan Rao (Rakshit Atluri) and Ranga Rao (Thiruveer), two brothers who live in a community whose subsistence comes from working in the cashew processing factory run by Lingamurthy (Janardhan), the local landlord. Oppression is rife in small and big ways, with those of the upper caste, or even those having the favor of the local landlord, running roughshod over those seen as "maila". Mohan Rao and Ranga Rao, who are from a family of locally renowned folk artists, and are also quickly gaining some fame for their own performances, decide to be proactive and answer violence with violence.

From there, it's like a game of Street Fighter, wherein every time they beat up someone, they level up. They beat up Lingamurthy's son, they come to the notice of the local "rowdy", an enforcer of sorts who rules by fear and myth. They beat him up, and become the local rowdies. They kill the landlord and enter politics. And so on and so forth, until a thing happens right after the interval.

Palasa 1978 fails utterly at presenting you with a coherent plot, which is doubly sad because the setting and cinematography are quite detailed and rich in character. The speech, the locales, the clothing, the music - they all ring very authentic. The characters themselves, no matter how small, clearly demonstrate an attempt at writing complex individuals. Mohan Rao and Ranga Rao are flawed and sometimes interesting people who are most eloquent at expressing the frustration of feelings "above their station" with their fists, and are portrayed admirably by Thiruveer and Rakshit Atluri, in the few instances the plot allows them. The villains are only a little cartoonish, which is an achievement all on its own. Nakshatra, who plays Ranga Rao's love interest, is genuine in her portrayal of a rural girl with small ambition, and isn't there solely for Ranga Rao to romance.

The problem here is that the movie tries to explore far too many themes at once - family politics, actual politics, class discrimination, caste discrimination, casual violence, police brutality - each of which is resolved with a "fight scene", with the result that there's a fight scene once every five minutes, and no actual resolution. The film references a number of real life atrocities that occurred against Dalits, but none of them rings true. The dialogue, while authentic in accent and slang, is quite tedious and predictable in content.

Essentially, Palasa 1978 is a film with oodles of potential wasted because it wanted to both be authentic and appeal to the masses and therefore isn't particularly great at either. Watch it at home, or just give it a miss altogether.
Share. Save. Connect.
Tweet
PALASA 1978 SNAPSHOT 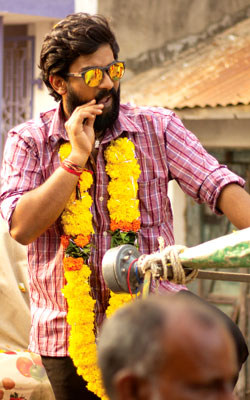 ADVERTISEMENT
This page was tagged for
1978 palasa full naa move
Palasa 1978 telugu movie
Palasa 1978 reviews
release date
Nakshatra, Rakshit Atluri
Follow @fullhyderabad
Follow fullhyd.com on
About Hyderabad
The Hyderabad Community
Improve fullhyd.com
More
Our Other Local Guides
Our other sites
© Copyright 1999-2009 LRR Technologies (Hyderabad), Pvt Ltd. All rights reserved. fullhyd, fullhyderabad, Welcome To The Neighbourhood are trademarks of LRR Technologies (Hyderabad) Pvt Ltd. The textual, graphic, audio and audiovisual material in this site is protected by copyright law. You may not copy, distribute, or use this material except as necessary for your personal, non-commercial use. Any trademarks are the properties of their respective owners. More on Hyderabad, India. Jobs in Hyderabad.