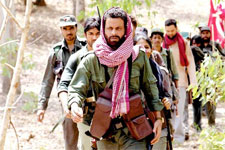 Nupur Barua / fullhyd.com
EDITOR RATING
5.0
Performances
Script
Music/Soundtrack
Visuals
6.0
4.0
5.0
7.0
Suggestions
Can watch again
No
Good for kids
No
Good for dates
No
Wait for OTT
No
Esha Gupta apparently wanted her name in the "special appearance" title of Chakravyuh, and not in the "main cast". She had a point, but Prakash Jha overrode her apprehensions. The poor girl is in a handful of scenes, and does not contribute much, but her importance is exaggerated the minute her name appears in the main cast title sequence.

This and other such elements, insignificant though they may be, make Prakash Jha's latest film, Chakravyuh, a little unpalatable. As with Esha, he overemphasises certain issues, but he completely underplays the parts in the movie that one would want more of.

To give you an idea of what the film is all about, here's a quick look at the plot. Adil Khan (Arjun Rampal), Kabir (Abhay Deol) and Rhea Menon (Esha Gupta) were in the Police Academy together at some point. Kabir's non-conformist views got him kicked out, and Adil has been sore at him ever since. Adil and Rhea are married, and they meet with Kabir at a reunion, and all is well with the world again.

Adil volunteers to be transferred to Nandighat, the hot seat of Maoist violence, as SP. Mahanta (Kabir Bedi), an industrialist, is planning to invest in the area, and the politicians want to ascertain that Mahanta feels safe and secure. Adil knows that displaced tribals are not always treated fairly, but there is nothing much he can do beyond his call of duty. It is the Naxals he is more concerned with, and he wants to break them by capturing a few key figures. The rest of the movie follows the Namak Haram / Avatar route.

What is not clear, however, is whether Jha wanted to present an objective view of the state of affairs. He begins with the perfect cop, Adil, who sticks to his principles of good and evil. And then he gives a free-spirited Kabir several shades of grey, and, subsequently, the Naxals become the epitome of social service and patriotism. The narrative then becomes a little skewed, and may leave you confused.

Additionally, Jha was so caught up with trying to cram everything he knows about Cops vs. Naxals into three hours (almost), that he skipped a very basic aspect of screenplay - characterisation and interpersonal relationships. One wonders why Kabir would want to risk his life for somebody whom he has not met with in a while, and why Adil would trust somebody he knows has temperament issues. The interpersonal relationships among the three friends, despite Rhea's excited yelp ("Kabir!!!") when she receives a phone call, is more shallow than relatable.

Jha does not explore issues, nor does he try to make incidents too dramatic or relatable - he just presents. Maybe he wants the audience to do the thinking, and you will - Maoists, after all, are a part of our daily news.

Arjun Rampal looks good at times, with the moustache and in the police uniform, but it is clear that he has trouble enacting a role that was tailor-made for Jha's favourite, Ajay Devgn. Rampal's efforts are obvious, but he has done a relatively commendable job.

Abhay Deol underacts, as he always does. And he is the harder hitting of the two actors - maybe also because he has more shades in his character. He is a delight to watch, and is probably one the best actors in the industry today.

Om Puri, Manoj Bajpayee, Murli Sharma, Kiran Karmakar, Chetan Pandit, and Kabir Bedi - all these veteran actors have very small roles, but they do justice to their characters. Manoj Bajpayee is wasted, actually. Esha Gupta is hardly there, and is therefore insignificant. Anjali Patil is promising, although her face looks bruised all the time.

One cannot fault Prakash Jha's production design. He loves to fill up his frames with people and vehicles that underline the constant chaos that any Indian town or city lives through on a daily basis. The cinematography is always grand, and establishing the heart of India, at least visually, is Jha's forte. His costumes are well-researched. This time, however, it is the music that disappoints, and one wonders what need there was of an item number.

The movie is titled Chakravyuh because that is the word that best describes the conundrum that India faces at present - which came first, terrorism or police brutality? The problem with the movie is its length, and the superficial skimming of issues. Otherwise, it is worth a watch, because it deals with an issue that needs to be discussed and solved as soon as possible.
Share. Save. Connect.
Tweet
CHAKRAVYUH SNAPSHOT 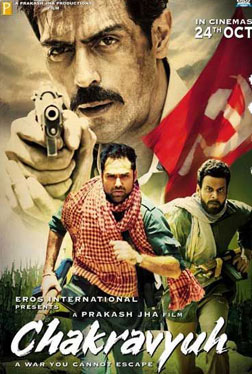 ADVERTISEMENT
This page was tagged for
hindi chakravyuh
Chakravyuh hindi movie
Chakravyuh reviews
release date
Abhay Deol, Arjun Rampal
Follow @fullhyderabad
Follow fullhyd.com on
About Hyderabad
The Hyderabad Community
Improve fullhyd.com
More
Our Other Local Guides
Our other sites
© Copyright 1999-2009 LRR Technologies (Hyderabad), Pvt Ltd. All rights reserved. fullhyd, fullhyderabad, Welcome To The Neighbourhood are trademarks of LRR Technologies (Hyderabad) Pvt Ltd. The textual, graphic, audio and audiovisual material in this site is protected by copyright law. You may not copy, distribute, or use this material except as necessary for your personal, non-commercial use. Any trademarks are the properties of their respective owners. More on Hyderabad, India. Jobs in Hyderabad.