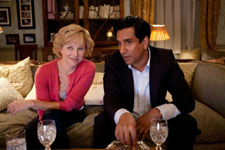 Nupur Barua / fullhyd.com
EDITOR RATING
5.0
Performances
Script
Music/Soundtrack
Visuals
5.0
4.0
6.0
7.0
Suggestions
Can watch again
No
Good for kids
No
Good for dates
No
Wait to rent it
No
Diana, once the Princess of Wales, wanted to be "the queen in people's hearts" and not of the country. She became synonymous with fairy tales and true romance. In fact, she had a lot going for her, but she was an unhappy person. Her admirers blame her husband, Prince Charles. Her critics think she was manipulative and an attention-seeker.

But her status as the most famous celebrity in the world remains unchallenged, 16 years after her tragic death. This is a fact that Oliver Hirschbiegel was aware of when he decided to direct a film that covers the last two years of her life, but he fails to recreate the magic that made Diana an immortal legend.

The movie begins with that fateful night in Paris when Diana (Naomi Watts) leaves her suite with Dodi Fayed (Cas Anvar). She is apparently waiting for a call, and is disappointed when her phone does not ring.

The story then goes back a couple of years. Diana has separated from her husband, and lives alone in her Kensington apartment. She is lonely, to say the least, and very, very unhappy. The royal palace allows her to meet with her sons once in five weeks, and she lounges around the house in the interim. Till she meets Hasnat Khan (Naveen Andrews), a heart surgeon at the hospital in Kensington.

Hasnat does not seem to be in awe of her, and Diana appreciates that. She invites him for supper, and one thing leads to another. Soon, the two of them are in a relationship, but since Hasnat is a very private person, the affair is kept a secret.

Suddenly, Diana rediscovers the joy of living, and she throws herself into social work and related activities with gusto. This is the period when she famously goes to Angola to bring land mining accidents to the attention of the world. She visits Australia to posthumously honour Hasnat's mentor. She even manages a secret visit to Hasnat's family in Pakistan when she makes an official trip there.

The pressures of being in a secret relationship finally take a toll on the couple, and they inevitably break up, for the final time. To recuperate from a broken heart and a breakdown, Diana jumps into a relationship with Dodi Fayed. She tells a paparazzi contact where they are vacationing, knowing that the intimate photographs will affect Hasnat. Before she can gloat, however, she drives into the tunnel in Paris, and out of this world forever.

The movie promos have stressed enough on this being a love story. Unfortunately, the screenplay does not support this claim. Diana stalks the doctor till he gives in, and then she becomes churlish and demanding. She wants to impress him all the time, and he is flattered. When he says he likes jazz, she listens to it. She reads books on medicine. She does everything a teenage girl in love would do, but there is no innocence. She admires the man, true, but love?

The script lacks the magic that is expected in a love story between a princess and a common man. There is no reason for the two of them to be together, and you do not find yourself lamenting the end of the relationship, nor do you want to root for them.

Take, for instance, the sequence that involves the couple getting into Diana's butler's car for a long drive to the countryside. The lack of chemistry in what is supposed to be a turning point in the relationship destroys whatever notions you have of love, and of Diana.

The best emotion that the plot gets out of you is indifference, and a slight disappointment with the discovery that Diana was not the angel you thought she was. Empathy is definitely not a part of your reaction.

In short, the movie is a pathetically frivolous attempt at re-imagining the private life of a very public persona. And since not much is known of the affair, it seems like the makers have taken too much liberty with the story, with complete lack of conviction.

Naomi Watts tries her best to emulate the late Diana, and she does get certain aspects right, but mostly, she hams. She smirks constantly, in an effort to re-enact Diana's charm - this becomes so annoying after a point that you wish you could tell her to shut up and stop with the expressions.

Naveen Andrews is a simpering idiot. Period. Why Geraldine James and Art Malik decided to be a part of this movie is a mystery.

Recreating widely televised and photographed sequences from the life and times of Diana is a challenge, and the makers have succeeded in making it look as realistic as possible. Particular attention has been paid to Diana's costumes and hairdos, and the authenticity of the research helps place the visuals in a familiar context. Here, the director and his team have excelled themselves.

The music is limited to some jazz and a few piano pieces, and serves its purpose. At less than two hours, the movie never seems to end.

You know how the story ends, so the only reason you would watch a movie on Diana is to understand what she was all about. She was never really a mystery, but she had the world under her spell. And Diana, the film, does nothing to add to the adulation or the criticism. Avoid this emotionless flick, and watch something else that gives you a more honest (and complete) picture of the ex-Princess of Wales her popularity - The Queen, for example, or Martin Bashir's 1995 interview with her.
Share. Save. Connect.
Tweet
DIANA SNAPSHOT 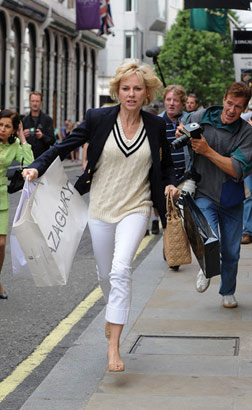 ADVERTISEMENT
This page was tagged for
Diana english movie
Diana reviews
release date
Naomi Watts, Naveen Andrews
theatres list
Follow @fullhyderabad
Follow fullhyd.com on
About Hyderabad
The Hyderabad Community
Improve fullhyd.com
More
Our Other Local Guides
Our other sites
© Copyright 1999-2009 LRR Technologies (Hyderabad), Pvt Ltd. All rights reserved. fullhyd, fullhyderabad, Welcome To The Neighbourhood are trademarks of LRR Technologies (Hyderabad) Pvt Ltd. The textual, graphic, audio and audiovisual material in this site is protected by copyright law. You may not copy, distribute, or use this material except as necessary for your personal, non-commercial use. Any trademarks are the properties of their respective owners. More on Hyderabad, India. Jobs in Hyderabad.