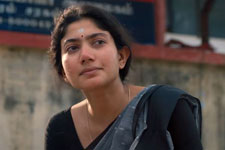 Sai Tulasi Neppali / fullhyd.com
EDITOR RATING
8.5
Performances
Script
Music/Soundtrack
Visuals
8.5
8.0
7.5
8.0
Suggestions
Can watch again
No
Good for kids
No
Good for dates
No
Wait for OTT
Yes
Gargi tells the heart-wrenching story of a daughter's fight to save her father from wrongful conviction. The ordinary middle-class life of Gargi (Sai Pallavi), a primary school teacher, is turned upside down when her father Brammananda (R S Sivaji) is named one of the accused in the gang rape of a nine-year-old girl, at an apartment where he works as a watchman. (A discerning watcher may find some similarities to a real-life gang rape case in Chennai that surfaced in early 2020. Gargi, originally a Tamil movie set in Chennai, has been dubbed into Telugu.) With a doggedness of character, Gargi sets out to prove her father's innocence in the court of law.

The broad strokes of Gargi's story are all too painfully familiar to us Indians - the media frenzy, the bloodthirsty mob, the "encounter" specialists, and above all the utter horror of the incident itself. In telling this story from the perspective of the alleged criminal's family, filmmaker Gautham Ramachandran, who wrote, produced and directed the movie, displays remarkable courage and originality. He stirs in you feelings of empathy and pity for the man behind bars, feelings you might never experience, perspectives you might never pause to consider when such incidents first come to light. In that sense, watching Gargi can be a revelatory experience.

The day that Gargi's father gets arrested begins like any other. At school, she invigilates an exam, and later in a stuffy teachers' room, she scores papers, ignoring the TV in the background giving updates on the rape case. On her way home, she rides the bus, feeds the stray dogs in her lane, and exchanges pleasantries with a neighbour. At home, she chides her mother for letting her little sister play outside by herself. Doesn't she know what the times are like for a young girl, she asks.

Even in depicting such everyday ordinariness, the movie is incredibly soulful. In the starchy folds of Gargi's cotton sarees; in the careless way that her headphones dangle off of an ear as she rides home; in the middle-class disarray of her house, its peeling paint, blackened switchboards and innumerable photos of gods adorning its walls; in the way sweat clings to the faces and underarms of people labouring in poor-ventilated government offices - a sparkling authenticity undergirds the movie.

Ramachandran treats the subject matter with the consummate decency that it deserves, both through its story and its screenplay. The face of the young victim is never shown. We see only her sprightly hops up a deserted staircase, and later her resigned limbs as the act of debauchery takes place. We see her shivering legs when she is asked to identify the perpetrators from a lineup, and her hunched silhouette as she pleads to be left alone. This expert use of negative space, of omitting the worst from the screen, so that our imaginations may colour in the rest, renders a far more harrowing experience than a full exposition of details.

There are no lengthy diatribes set to rousing music. No gotcha moments. Neither table-pounding nor finger-wagging. A less-skilled storyteller might have served us up a big dollop of grandiosity (common in such social dramas) at opportune moments, but Ramachandran resists that trap. When Gargi can't find a lawyer to represent her father, a novice advocate called Gireesham volunteers to help. Even when he stumbles across the smoking gun, he delivers it with a straight-faced eagerness, sweating and stuttering his way through it. Gargi never spends too much time denouncing the media circus, nor does she deliver lengthy lectures to her neighbours who have turned against her family.

The same authentic strain is apparent in the casting choices as well - character actors who deliver moving performances. S Sudha plays a transgender judge presiding over Gargi's case, her resounding baritone voice giving the courtroom proceedings an air of legitimacy. Actor Kaali Venkat who plays the nervy and eager lawyer Gireesham balances Gargi's graveness with a smidge of humour. Actor Saravanan delivers an intensely emotional performance straddling both grief and anger as the father of the young victim. The only weak link of the cast is Aishwarya Lekshmi who plays the half-baked character of a journalist who is forced to chase Gargi's story for TRPs. Aishwarya has a producer credit in the movie, so one wonders if a gratuitous role was penciled in just for her benefit.

Gargi, the movie, is ultimately Sai Pallavi's crown to wear. She plays Gargi with such reverence and gravitas that is hard to imagine anybody else in the current crop of Telugu actors doing it any better. Pallavi's offscreen reputation as a demure, eager and genuine person who shuns the glamorous airs of celebrity, makes her a natural Gargi in the eyes of the audience. Her voice (she dubs for herself in both Tamil and Telugu) is deep and assured, a perfect timbre for a woman punching above her weight. Gargi will be remembered for a long time as Sai Pallavi's breakout role.

Much of Gargi's story is procedural - courtroom arguments and evidence-gathering - although it does leave plenty of space for soul-stirring displays of emotion. There are many moments when you will find a lump stuck in your throat. But underneath it all, there is still a central mystery that remains, a nagging doubt about the real identity of the culprit. Gargi brings this suspense to a rolling boil until, at the very end, it erupts in a stunning revelation, leaving you slightly dazed as you exit the theatre. 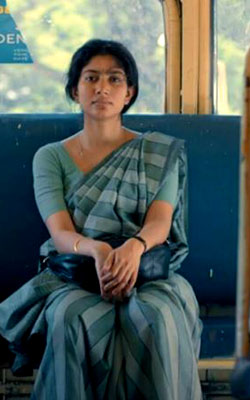 ADVERTISEMENT
This page was tagged for
Gargi telugu movie
Gargi reviews
release date
Sai Pallavi, Kaali Venkat
theatres list
Follow @fullhyderabad
Follow fullhyd.com on
About Hyderabad
The Hyderabad Community
Improve fullhyd.com
More
Our Other Local Guides
Our other sites
© Copyright 1999-2009 LRR Technologies (Hyderabad), Pvt Ltd. All rights reserved. fullhyd, fullhyderabad, Welcome To The Neighbourhood are trademarks of LRR Technologies (Hyderabad) Pvt Ltd. The textual, graphic, audio and audiovisual material in this site is protected by copyright law. You may not copy, distribute, or use this material except as necessary for your personal, non-commercial use. Any trademarks are the properties of their respective owners. More on Hyderabad, India. Jobs in Hyderabad.