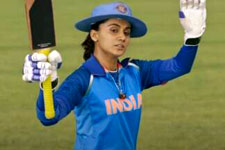 Taapsee Pannu is back with a sports drama for the fourth time (five if you consider a non-sportswoman appearance in Soorma) - she played track-and-field athletes in Looop Lapeta and Rashmi Rocket, and a sharpshooter in Saand Ki Aankh - in Shabaash Mithu, where she plays the role of Indian women's cricketing legend Mithali Raj.

Shabaash Mithu is veteran Bengali director Srijit Mukherji's third foray into Hindi cinema - after the average Begum Jaan and the recently released Sherdil: The Pilibhit Saga. Mukherji is yet to replicate the success he enjoyed in the Bengali film industry in Bollywood, and it's unlikely that Shabaash Mithu is the one that will do it for him.

Shabaash Mithu is the story of Mithali Raj, perhaps the most famous Indian women's cricket player, and one of the most decorated international cricketers of all time. It chronicles her journey from being a young girl who used her background in classical dance to understand facets of the sport differently, to being both the youngest debutant and youngest captain of the Indian team.

Shabaash Mithu also shines a light on the plight of women cricketers in India, even those playing at the highest level. Not only did most of the women in the team endure tremendous personal struggles to even be able to play cricket, they also had to fight for every basic need despite representing the nation on a world stage.

Shabaash Mithu is a boring movie to say the least, primarily for its 156-minute running time. Despite a certain earnestness in portraying the struggles of these fantastic women, it drags on and on, and loses the viewer's interest even before the third act begins. It doesn't help that the actual international cricketing action is given little screen time. For a sports film, Shaabash Mithu is too focused on the women's personal journeys and not enough on the cricketing action - especially when its more-than-two-and-a-half-hours length should have provided ample time to do justice to both.

Finally, the issue which makes the ending of the film a lacklustre affair is the lack of a proper sporting conflict. Most of the sports movies audiences love have a resolution of a long-standing conflict, or a sporting rivalry, or even a heroic underdog story where the participation is of more importance than the result, and Shabaash Mithu fails to give us any of that.

Maybe the Indian women's cricket team were really underdogs, and reaching the final was a big deal in itself - but show us that! What we get instead is an unresolved stand-off between the women's team and the totally-not BCCI - why does Raj leave the team due to lack of organisational cooperation but suddenly get back despite none of her misgivings being addressed? Why did the team suddenly win the hearts of the country, despite already having made the finals of the World Cup once before in 2005? Why did the fortunes of the team and Raj herself depend upon the 2017 World Cup, especially when she was already a Padma Shri awardee by 2015 and wasn't an unrecognised name? We don't get any answers.

Taapsee Pannu is dependable as usual, though the artificial darkening of her skin is just plain weird. Yours truly thought the same thing about Hrithik Roshan in Super 30 and Bhumi Pednekar in Bala, and it is bizarre that this is still going on.

Vijay Raaz has a nice outing as Mithali's first coach - his no-nonsense attitude coupled with his immense belief in her talent gives her the confidence to blaze through a male-dominated field. The rest of the supporting cast are adept enough, particularly some of her teammates in the Indian team.

Despite the sensible decision of opting to go with no background music during some of the more important moments, Shabaash Mithu's score leaves much to be desired. The music is loud, and not very memorable. Oh, and having to hear Kailash Kher, who was accused of being a serial harasser by multiple women in the industry, belt out a song about women's empowerment is the final straw.

The only reason to watch Shabaash Mithu with any urgency is if you're a fan of Taapsee or of Mithali herself, or a die-hard cricket fan who wants to consume any and all media of the sport. If not, maybe wait for it to get onto a streaming platform. 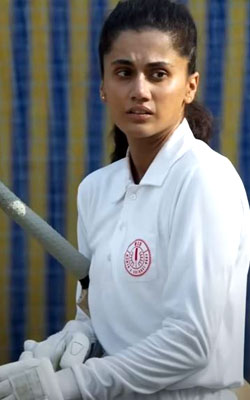 ADVERTISEMENT
This page was tagged for
Shabaash Mithu hindi movie
Shabaash Mithu reviews
release date
Taapsee Pannu, Vijay Raaz
theatres list
Follow @fullhyderabad
Follow fullhyd.com on
About Hyderabad
The Hyderabad Community
Improve fullhyd.com
More
Our Other Local Guides
Our other sites
© Copyright 1999-2009 LRR Technologies (Hyderabad), Pvt Ltd. All rights reserved. fullhyd, fullhyderabad, Welcome To The Neighbourhood are trademarks of LRR Technologies (Hyderabad) Pvt Ltd. The textual, graphic, audio and audiovisual material in this site is protected by copyright law. You may not copy, distribute, or use this material except as necessary for your personal, non-commercial use. Any trademarks are the properties of their respective owners. More on Hyderabad, India. Jobs in Hyderabad.