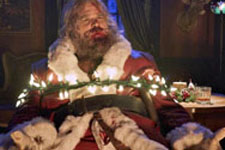 Sai Tulasi Neppali / fullhyd.com
EDITOR RATING
6.5
Performances
Script
Music/Soundtrack
Visuals
7.0
6.0
8.0
8.0
Suggestions
Can watch again
No
Good for kids
No
Good for dates
No
Wait for OTT
Yes
It seems no one can escape the existential angst of modern life. Not even jolly ol' Santa Claus. In Tom Wirkola's Violent Night, Santa has lost his ho-ho-ho. He is a roving alcoholic with a touch of depression, sick and tired of gifting video games to entitled kids. Between deliveries, he knocks it back at seedy dive bars. Gone is his holiday cheer, his pot belly is now full of beer. He thinks that this might be the last of his 1,100-year-old gig as the father of Christmas.

David Harbour plays a disillusioned Santa who gets stuck in a hostage situation at the expansive estate of the wealthy Lightstone family. Santa has just about wolfed down the Lightstones' gingerbread cookies and raided their liquor cabinet when a gang of mercenaries - led by a very, very naughty man who calls himself Mr. Scrooge (John Leguizamo) - strikes. The Lightstones are a bunch of shallow money-grubbers. Santa doesn't care what happens to them. He is about to scram when the youngest Lightstone kid, sweet little Trudy, reaches out to him for help. Grandpa Santa's heart melts. He hammers the living shit of the bad guys, and Christmas is, once again, saved.

Rogue Santa is a wicked good idea. Violent Night, however, is an awkward straddle between the Hallmark world of gooey drama and Tarantino-style action. There are nearly as many scenes of heartwarming sentimentality between Trudy and Santa as of Santa splitting open heads. But rampaging Santa is the only Santa you want to watch, and you really wish the movie just stuck to its deadly track. After all, the film's A-rating means that the movie halls aren't filled with children distraught at watching Santa explode a man.

Santa's got all sorts of holiday-themed ways to kill: electrocution with Christmas Lights, impaling with icicles, bashing heads with porcelain dolls of Baby Jesus. (The production house behind this movie, 87North, also made the outrageously stylish crime-thrillers, Nobody and Bullet Train). But it's most fun when Santa awakens the Viking warrior inside him, crushing an array of skulls with a giant mallet to the tune of Bryan Adams' crooning. Similarly, Trudy's transformation from nice to naughty is delightful, as she channels the cunning and resourcefulness of the iconic Home Alone kid in setting up her booby traps for Scrooge's henchmen.

David Harbour's portrayal of Santa is an artful blend of humour and menace, just like you'd expect from the love child of Seth Rogen and a Norse god. Leah Brady's Trudy Lightstone is sweet as cherry pie, and her faith in Santa Claus is almost contagious. However, John Leguizamo's Mr. Scrooge falls short in terms of villainy.

Violent Night is like the naughty older sibling of your typical Christmas movie. It's like a spiked punchbowl or a hash brownie that you can sneak out to enjoy while your kids are busy writing letters to the imaginary Santa. In other words, it's a treat for grown-ups who need a break from all the cheerful, family-friendly holiday fare. You just wish this treat were a little less sweet and a lot more sinful.
Share. Save. Connect.
Tweet
VIOLENT NIGHT SNAPSHOT 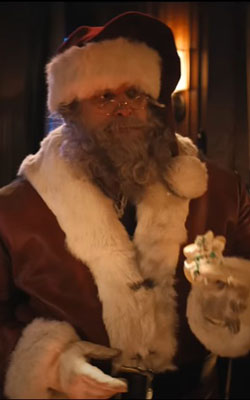 ADVERTISEMENT
This page was tagged for
Violent Night english movie
Violent Night reviews
release date
David Harbour, John Leguizamo
theatres list
Follow @fullhyderabad
Follow fullhyd.com on
About Hyderabad
The Hyderabad Community
Improve fullhyd.com
More
Our Other Local Guides
Our other sites
© Copyright 1999-2009 LRR Technologies (Hyderabad), Pvt Ltd. All rights reserved. fullhyd, fullhyderabad, Welcome To The Neighbourhood are trademarks of LRR Technologies (Hyderabad) Pvt Ltd. The textual, graphic, audio and audiovisual material in this site is protected by copyright law. You may not copy, distribute, or use this material except as necessary for your personal, non-commercial use. Any trademarks are the properties of their respective owners. More on Hyderabad, India. Jobs in Hyderabad.