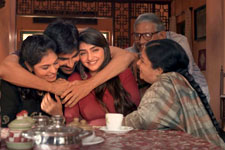 Sai Tulasi Neppali / fullhyd.com
EDITOR RATING
6.0
Performances
Script
Music/Soundtrack
Visuals
8.0
5.0
7.0
7.0
Suggestions
Can watch again
No
Good for kids
No
Good for dates
No
Wait for OTT
Yes
First, the good news: Ravi Teja's still got it, people! He can still don a nonsensical avatar and make us laugh. It did take him a few flops - like that corny mess of a film, Ramarao on Duty - to realize that his forté is comedy. The audience wants him goofing around, not making melodramatic speeches. Trinada Rao's Dhamaka serves us a big Thali of that vintage Ravi Teja. On this menu are rambunctious fights, masala songs, and an absolutely ludicrous plot starring the "Mass Maharaja" in a double-action role.

Dhamaka is about a corporate rivalry between two families. Sachin Khedekkar plays Chakravarthy, a benevolent ailing leader of large conglomerate. His son Anand (Ravi Teja) is set to inherit the company but gets thwarted by JP (Jayaram), a ruthless business shark whose takeover method-of-choice is murder.

In a parallel world lives Swami (also Ravi Teja), who looks exactly like Anand but has a diametrically opposite persona: Swami is an irreverant tapori who has just been fired from his office job whereas Anand is a polished, ahimsa-adherent. If you think about it, these two avatars are the facets of Ravi Teja's acting legacy. On one hand, he wants to be taken seriously as a pan-India mass superstar in hefty dramas a la Allu Arjun. That could be why Dhamaka is getting a Hindi release, too. But on the other hand, his acting has the pakka-local flavour of a street rowdy. You can guess which side wins out in the end.

Dhamaka is ostensibly a story of rivalry and romance - both Anand and Swami like the same girl Pranavi (Sreeleela) - but in reality it's a out-and-out farce. It's just that our comedically-gifted hero is reluctant to be seen as just a joker. So to boost Ravi Teja's image as an all-round player, the script throws in some pulp action between meme-like skits. There are mass-y dialogues for Ravi Teja to bellow: "If I see a villain in you, you'll see a hero in me." And gajuwaka-beat songs for him to groove to. The rest of the cast is also game to join the fun. Rao Ramesh who plays Pranavi's father, Tanikella Bharani who plays Swami's father, and even Jayaram as the villain JP have mischievous angles to their roles. It's plainly obvious that the gun-toting and thigh-slapping are just a slim cover for lighthearted whimsy at the core of the movie.

Double-action roles tend to have a tedious sub-plot about mistaken identity. The two heroes swap places, and confusion ensues. At least Dhamaka does away with that trope by (ahem) doubling-down (ahem) on its preposterous plot. The second half is less outlandish than the first, but it's stuffed with so many peppy dance numbers, one of which happens in the midst of a fight - coz, why not - that all the silliness just washes over us.

I have come to believe that the right vehicle for the illogical plots of commercial cinema is comedy, comedy and more comedy. Only when the writing is self-aware and funny can all the other stupidity go down easier. For instance, the casual sexism of mass cinema would horrify us in a realistic drama, but when a movie's stunts are breaking the laws of physics, and its sub-plots are spitting on the rules of logic, then what additional harm would another un-PC statement do? If it makes us laugh, I guess, much can be forgiven and forgotten. Otherwise, just add it to the trash pile and ignore it. Dhamaka just about manages to keep you entertained as long as you put your Sapien brain in a jar and watch it in Neanderthal-mode.

Ravi Teja is in a glib, firecracker mode most of the time. But you can watch him be both serious and snarky, and judge for yourself which way he ought to lean in his future projects. Sreeleela admirably pushes through her dumb role as the token-sexpot to make an impression. Rao Ramesh's acting is unimpeachable at this point - he's been so consistently good lately. Finally, the mother characters played by Thulasi and Rajshree Nair deserve some recognition for shining in their supporting roles as sarcastic goddesses.

If Dhamaka works, it's because it's ridiculous while knowing that it's ridiculous. It doesn't try to fool us into believing that it's a grand feat of storytelling. And there is some integrity in that. I won't comment on the problematic larger trend of Tollywood overusing comedy to boost every stupid story. But I'll let this one pass because the movie had me tittering and tapping my feet intermittently.

I leave you now with this "gem" of a line that Ravi Teja's character says to the villain, and you can decide if you wanna willingly subject yourself to some Dhamaka. It goes: "Reeyyy... the minute you laid hands on my father, God sent me the OTP for your DEATH!!!" 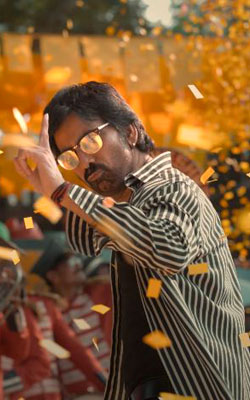 ADVERTISEMENT
This page was tagged for
Dhamaka telugu movie
Dhamaka reviews
release date
Ravi Teja, Sreeleela
theatres list
Follow @fullhyderabad
Follow fullhyd.com on
About Hyderabad
The Hyderabad Community
Improve fullhyd.com
More
Our Other Local Guides
Our other sites
© Copyright 1999-2009 LRR Technologies (Hyderabad), Pvt Ltd. All rights reserved. fullhyd, fullhyderabad, Welcome To The Neighbourhood are trademarks of LRR Technologies (Hyderabad) Pvt Ltd. The textual, graphic, audio and audiovisual material in this site is protected by copyright law. You may not copy, distribute, or use this material except as necessary for your personal, non-commercial use. Any trademarks are the properties of their respective owners. More on Hyderabad, India. Jobs in Hyderabad.