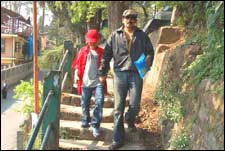 Deepa Garimella / fullhyd.com
EDITOR RATING
4.0
Performances
Script
Music/Soundtrack
Visuals
5.0
6.5
6.5
4.5
Suggestions
Can watch again
No
Good for kids
No
Good for dates
Yes
Wait for OTT
Yes
Chowrasta is unlike many 'art movies' in that it is not depressing. Okay, it is 93% English (and 5% Bengali and 2%), and features a couple of seemingly irreparably dysfunctional relationships, and even a bit more than that. But because it uses optimism, transformation and the power of true love (not in any other-worldly way but in a very human-emotional way) to resolve its complex situations, it is much more watchable than artistic indulgences that make you feel like you've been through a 'Life Sucks' crash course.

The voice of Jimmy (Victor Banerjee), a daydreamer who writes love-letters to his dead wife, opens the story. His lengthy mush-missives consist mostly of how beautiful Darjeeling and its people are, and how every pulse of life reminds him of her. With his pompous verse as the backdrop, Chowrasta narrates 3 everyman stories, with Jimmy unwittingly dropping by occasionally into each of them.

A divorced school teacher, Deep (Saswata Chatterjee) has to confront his B-grade actress ex-wife, Nandana (Roopa Ganguly), who comes to Darjeeling with her photographer boyfriend (Arijit Dutta) and a son whose father she 'isn't sure' of the identity of. Intertwined with their lives is a lawbreaker Kenny (the amazing Atul Kulkarni) who is on the run, and who himself is rendered helpless because he has been cheated by someone. Another thread involves an eloped and now honeymooning couple, one of whom is on the brink of disillusionment with the marriage.

The film is, for the most part, a pleasant watch. However, it slacks in places where Jimmy's verbosity and part-eccentricity take over - because he has simply no point other than to be that vague connector among the 3 stories. The narration could easily have done without a Jimmy. And then, it would have been more interesting to watch some deeper connect among the 3 threads.

The stories by themselves aren't exactly brilliant revelations of human character, nor are they inaccurate depictions - they're just well-scripted ones. This is, thus, not the most phenomenal movie you would encounter on human relationships and emotions.

Chowrasta, however, does some fine character-building, mostly of Kenny and Deep. The winner among the stories, and thus the characters, is Atul Kulkarini's Kenny. Kulkarni is one of today's most exemplary actors, who we are fortunate to witness even in the mainstream, and he lends his role a totally expected sincerity right from the word go. His role is not the main one, but is especially notable because it graduates from the most disturbing part of the film to the most poignant.

The actor playing Deep has done an impressive job, but unfortunately for the non-Bengali audiences, he speaks mostly in Bengali. So if you're not from the region, you had better be good at translating his lines using the context and the smattering of English that he uses. The rest of the actors are about allright, but some of the performances, owing to the forced English in the lines, are too affected, and remind you of school plays.

Chowrasta is set in a hill station, but has a faded, tired look about it. The music is pleasant, with a guitar used for the bakcground, and a couple of beautiful ballads towards the end.

Since there isn't anything much on the big screen, Chowrasta might be your best bet on the 'Hindi' (this one's in English, actually, and a little bit of Bengali) screen. It is a decent watch, but only if you get to take time out from IPL and its offshoots.
Share. Save. Connect.
Tweet
CHOWRASTA - CROSSROADS OF... SNAPSHOT
CHOWRASTA - CROSSROADS OF LOVE SNAPSHOT