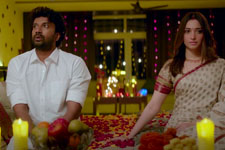 Sai Tulasi Neppali / fullhyd.com
EDITOR RATING
6.5
Performances
Script
Music/Soundtrack
Visuals
7.0
6.0
7.0
7.0
Suggestions
Can watch again
No
Good for kids
No
Good for dates
Yes
Wait for OTT
Yes
There is nothing frosty about this Telugu remake of the runaway 2020 Kannada hit, Love Mocktail. Gurthunda Seetakalam ("remember those winters?") is a meandering trip through the love life of Dev (Satyadev Kancharana), from his pimply teenage crushes to his complicated adult affairs. In the present day, Dev reminisces about these to Divya (Megha Akash), his incorrigibly bubbly traveling companion, as they make their way to Mangalore.

It starts with a simple question: Is Dev single? Playful and flirtatious Divya is curious to know why the "very decent" Dev appears to be unattached. The answer makes for an 8-hour road-trip conversation.

Dev's first crush is a classic ugly-betty class nerd named Komali. His freshly-juiced teenage hormones run wild when she takes her glasses off and flashes a toothy smile. But Komali is too committed to her studies to indulge in love. So Dev stays lovelorn until college where he falls for an ultrarich vixen named Amrita (Kavya Shetty). Dev and Amrita have a tortured relationship that cycles through multiple breakups and makeups. For his third and final act, Dev gets with a cloyingly sweet Nidhi (Tamannah Bhatia).

Part of the intrigue in Dev's long-winded story is the identity of the girl that he finally chooses. Divya is like a detective on this case, pondering out loud between mouthfuls of junk food. And the question still remains - is he now single?

This Dev-Divya setup has a taste of Ryan Reynolds' evergreen rom-com Definitely, Maybe where his character narrates his dalliances to his young daughter, and she must guess who he ended up with. But Reynold's women are hardly the caricatures that Dev's are. Amrita is a manipulative bitch. She knows that Dev's IT salary could never provide for her lifestyle, but she strings him along and manipulates him like he is her plaything. Nidhi is her polar opposite - nice to a fault. And having grown up an orphan, she has major abandonment issues.

Most of us may be familiar with a Nidhi or an Amrita - some of us may even BE a Nidhi or Amrita - so it's only natural that we concoct a narrative arc for Dev in our heads. This subliminal superimposition of our opinions and biases on these characters makes Gurthundha Seethakalam both engaging and frustrating to watch. Like Dev's bestie (Priyadarshi), we are on the sidelines waving big red flags warning him against going back to Amrita when she resurfaces into his life. And when Dev's mind becomes opaque to the audience, when he takes strange decisions we'd never make, it pulls us out of our reveries and makes us scratch our heads.

The one place Gurthundha... never falters is when it packs in the nostalgia. Young Dev and his besties (acne-faced, bulbous-nosed teenagers) fuss over their Nokia button phones and their vagaries of SMS limits and midnight resets.

Gurthunda... is a showcase of Satyadev's versatility as an actor. He has no problem breaking out of the gruff and serious mould that his physique and voice are best suited for (Godse, Uma Maheswara Ugraroopasya). He even manages to pull off playing an 18-year-old college student. Satyadev and Priyadarshi's banter and physical chemistry are an absolute joy to watch. So much so that as Satyadev's character matures and strays away from his bestie, in the way adults typically do, the void of their friendship is clearly felt.

Kavya who plays Amrita is a rather obvious case of typecasting a big-boned woman as a villain. Tamannah who plays the contrasting Nidhi is vaguely irritating too, but it is hard to tell how much of it is the intrinsic unlikability of her character. Megha too is similarly caged inside a juvenile Divya.

Gurthunda Seethakalam's characters ultimately become ingratiating enough that there is very little sympathy for the goings-on at the end. It feels somewhat pointless and tiresome, and makes you ache for the happier winters of Dev's youth. 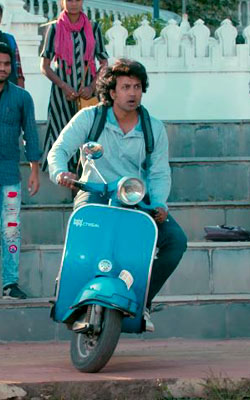 ADVERTISEMENT
This page was tagged for
Gurtundha Seetakalam telugu movie
Gurtundha Seetakalam reviews
release date
Satyadev Kancharana, Tamannaah
theatres list
Follow @fullhyderabad
Follow fullhyd.com on
About Hyderabad
The Hyderabad Community
Improve fullhyd.com
More
Our Other Local Guides
Our other sites
© Copyright 1999-2009 LRR Technologies (Hyderabad), Pvt Ltd. All rights reserved. fullhyd, fullhyderabad, Welcome To The Neighbourhood are trademarks of LRR Technologies (Hyderabad) Pvt Ltd. The textual, graphic, audio and audiovisual material in this site is protected by copyright law. You may not copy, distribute, or use this material except as necessary for your personal, non-commercial use. Any trademarks are the properties of their respective owners. More on Hyderabad, India. Jobs in Hyderabad.