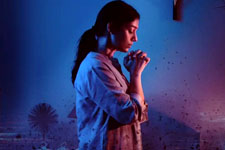 Sai Tulasi Neppali / fullhyd.com
EDITOR RATING
5.5
Performances
Script
Music/Soundtrack
Visuals
7.0
5.0
7.0
6.0
Suggestions
Can watch again
No
Good for kids
No
Good for dates
No
Wait for OTT
No
When COVID hit, it wasn't just schools and offices that embraced Zoom. Even hauntings and exorcisms went virtual - at least according to Ashwin Saravanan's lockdown-themed horror Tamil-dubbed thriller, Connect. Told through a series of video calls, Connect's story is built around the constraints of the pandemic.

The story begins in the final days of what we now call the "pre-pandemic" time. The Benoy family is on vacation at a sunny beach. Their teenage daughter Anna strums a guitar and contemplates a bright future at an eminent music school in London. Anna's father (Vinay Rai), a doctor, receives a call about a new virus. It's the last time we see them happy. Darkness closes in. Anna's father, on the frontlines of the fight against COVID-19, succumbs to the virus. Anna becomes distraught at the sudden loss, and turns online Ouiji board practitioner to summon her dad. Instead, the medium invokes an evil spirit that takes possession of Anna's body.

Director Saravanan makes use of the claustrophobia and the despair of the lockdown period to amp up the sense of helplessness that Anna's family feels. Anna's mother, Susan (Nayanthara), can't step out to seek help. And Anna's grandad (Sathyaraj), who lives in a different city, can only helplessly watch and wail from the other side of the video camera as he spots strange occurrences on calls with his daughter.

Having video calls be front-and-centre to the script does add a bit of creativity to Connect, though. Like digitally-transferred ghosts, for instance! The demon first takes possession of Anna through Zoom. Thereafter, every time Anna's mother is on video with anyone, the demon - in Anna's form - makes a dramatic entry and exit, giving us plenty of jumpscares by suddenly popping into focus.

But it's not just online hauntings that make Connect a lockdown-themed horror. The film itself was written and filmed in the throes of the pandemic. Which explains why the story is as anemic and pale as a baby birthed and raised in the dark. The narrative has a sprinkling of horror-101 scares - eerily-lit hallways, flickering lights, swinging doors and swiveling chairs. But the underlying story is essentially lifeless. Video calls are ultimately just gimmicks. Rather than exploring the uniqueness of that time period to set it apart from other horrors, the story turns into yet another "religion to the rescue" trope.

Without many compelling reasons to be truly terrified, Nayanthara and Sathyaraj especially act like they're in a parody. Anupam Kher, who you might recall played a Hindu scholar in Karthikeya 2, reprises his role as healer-of-last-resort and the holy man with all the answers. Only, here he is a Catholic priest. And his heart doesn't seem to be in it. He speaks with the drone of a schoolkid mugging a history textbook when he sermonizes or recites the Bible. Haniya Nafisa plays Anna who is shrouded in darkness for most of her scenes as a possessed girl. Her character feels more like a prop than a human being, though.

In the end, Connect is an exceedingly average possession-and-exorcism story with all the Christ versus Satan clichés you might expect to see. Set at a time when even ordinary life felt like a horror movie, with lockdowns driving some of us to the edge of madness and making us want to climb the walls, Connect could have made a bigger impact by plumbing the depths of those anxieties. It needed to be scarier and stranger than reality. Instead, it is limp and anachronistic.
Share. Save. Connect.
Tweet
CONNECT (TELUGU) SNAPSHOT 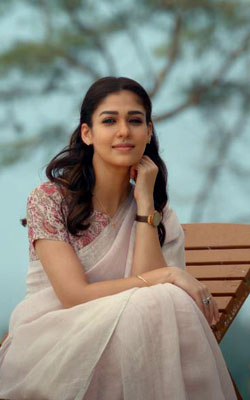 ADVERTISEMENT
This page was tagged for
Connect (Telugu) telugu movie
Connect (Telugu) reviews
release date
Nayanthara, Sathyaraj
theatres list
Follow @fullhyderabad
Follow fullhyd.com on
About Hyderabad
The Hyderabad Community
Improve fullhyd.com
More
Our Other Local Guides
Our other sites
© Copyright 1999-2009 LRR Technologies (Hyderabad), Pvt Ltd. All rights reserved. fullhyd, fullhyderabad, Welcome To The Neighbourhood are trademarks of LRR Technologies (Hyderabad) Pvt Ltd. The textual, graphic, audio and audiovisual material in this site is protected by copyright law. You may not copy, distribute, or use this material except as necessary for your personal, non-commercial use. Any trademarks are the properties of their respective owners. More on Hyderabad, India. Jobs in Hyderabad.