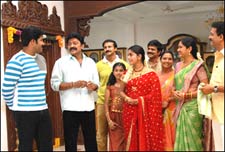 Krishna KBS / fullhyd.com
EDITOR RATING
3.5
Performances
Script
Music/Soundtrack
Visuals
6.0
2.0
3.0
3.0
Suggestions
Can watch again
No
Good for kids
Yes
Good for dates
No
Wait to rent it
No
We watch movies to escape from the routine or drab lives that we are forced to lead day in and day out. So what do you think of the idea of facing the same mind-numbing monotony in the theatre?

For those who have missed the trailers of Gorintaaku, it is a story of a brother and a sister. Now sibling relationships have been done to death by filmmakers of yore. But no complaints so far, as sentiment always has a place - thankfully, even in the existing mechanical milieu. Only, you expect it at least to be packaged and served as per the tastes of the present generation, where raciness is the mantra to success - critical and commercial.

Alas, Gorintaaku's director, like Rip Van Winkle, seems to have fallen asleep a score years ago, and has not waken up and smelt the coffee, leave alone drink it. Thus, we are treated to a plot that ambles on about a loving brother (Rajasekhar) and sister (Meera Jasmine), who are forced to face the consequences of the good nature of Sarvarayudu, their father (Rajasekhar again).

We have heard of the sins of fathers visiting the sons, and of old sins casting long shadows. But in this movie it seems that goodwill too has its share of misfortunes. Sarvarayudu, the benevolent patriarch of a village, puts an end to the business and life of a person preparing and selling adulterated liquor, and well, the liquor seller's wife takes her own sweet time to take revenge on Sarvarayudu's progeny.

How she goes about it and how successful she is are no-brainers. Anyone who has got an idiot box back home would have been forced to catch a snippet of a television soap opera sometime or the other, and the modus-operandi of the lady-villain borrows liberally from these brain-dead serials. And yes, that's about it.

With a plot like that, it would be a huge surprise if anyone would desire to venture to check this movie out. Add to it the fact that the technical departments of the film, like editing, photography and background score, are perfunctionary, and you have a mind-numbing exercise in indolence. S A Rajkumar does churn out a couple of melodies; but even they have a heard-before feel.

As for the actors, they sincerely try to pour life into a comatose flick. Rajasekhar is his usual dignified self, and performs commendably as a brother and a patriarch. But isn't he better off doing cop roles? It is a good idea to try and break out of an image, but thinking out of the box does not necessitate ignoring the box-office.

Meera Jasmine suits the role of the innocent and adoring sister to a T. And Venu Madhav in a comic sub-plot is hilarious, and frankly, his bits are the best part of the movie - which does not say much about the film.

The others like Chandra Mohan, Akash, and Sivaji Raja do their bit decently. However Aarti Agarwal, as the wife of the younger Rajasekhar, is a major disappointment, for more than the expected reasons - her looks have taken a major pounding in the time she has spent away from films.

All in all, Gorintaaku tastes like yesterday's coffee that has been boiled too many times to have an iota of caffeine left. If you really want to watch sibling relationships and melodramatic sentiment, there is always NTR's Rakta Sambandham or Chitti Chellalu.
Share. Save. Connect.
Tweet
GORINTAAKU SNAPSHOT

ADVERTISEMENT
This page was tagged for
Gorintaaku telugu movie
Gorintaaku reviews
release date
Dr. Rajasekhar, Meera Jasmine
theatres list
Follow @fullhyderabad
Follow fullhyd.com on
About Hyderabad
The Hyderabad Community
Improve fullhyd.com
More
Our Other Local Guides
Our other sites
© Copyright 1999-2009 LRR Technologies (Hyderabad), Pvt Ltd. All rights reserved. fullhyd, fullhyderabad, Welcome To The Neighbourhood are trademarks of LRR Technologies (Hyderabad) Pvt Ltd. The textual, graphic, audio and audiovisual material in this site is protected by copyright law. You may not copy, distribute, or use this material except as necessary for your personal, non-commercial use. Any trademarks are the properties of their respective owners. More on Hyderabad, India. Jobs in Hyderabad.