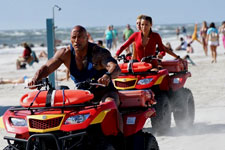 Vaishnavi Kulkarni / fullhyd.com
EDITOR RATING
6.0
Performances
Script
Music/Soundtrack
Visuals
7.0
6.5
7.5
7.0
Suggestions
Can watch again
No
Good for kids
No
Good for dates
No
Wait to rent it
No
If you were born in the '80s, you may have spent your adolescent years watching buff and buxom lifeguards perform heroic fetes far above their station in Baywatch, the TV series that ran for more than a decade and spanned the '90s. 15 years later, Seth Gordon brings us a 21st century take on the show, putting an R-rated comedic spin on the action-drama of old. The roles of the almost exclusively all-white cast of the TV series (starring David Hasselhoff, Jeremy Jackson, Michael Newman and Pamela Anderson) have been given to a more racially diverse ensemble.

Baywatch is the kind of mindless entertainment that is perfect for unwinding after a stressful work week - you watch, you laugh, you leave. If you try to use your brain too much, you are assaulted by the sheer amount of insanity in the movie, and the gnawing realisation that about 70% of the movie would have been entirely unnecessary if these people gallivanting about in swimsuits had just done their jobs and left the heroics to the police.

So Mitch Buchannon (Dwayne Johnson) is a lifeguard who takes his job very seriously (and for good reason; not only does he save lives, but it also lets him afford high-end beachfront property - no wonder so many people turn up for try-outs). Mitch is hailed as a god by people on the beach, perhaps because he was mistaken for Adonis with his chiselled build. Much like the Greek god, he is shrouded in myth and mystery - he is even attributed to founding Facebook by one young lad, though any similarities between him and Zuckerberg are not easily discernible.

We mustn't forget Priyanka Chopra (the reason for 90% of the film's Indian viewership) of course, starring as the ravishing Victoria Leeds. Coy and cunning, Leeds is at the centre of a nefarious plot for the expansion of her business - shunned by her parents at an early age, she has apparently decided that being a murderous drug dealer will make them proud. But this female version of Gus Fring has none of his expertise in the art of secrecy, for the lifeguards are on to her almost at once.

It becomes a tussle between Mitch and Matt, a battle of wills between the devoted veteran and the selfish newbie who couldn't care less. But amidst gory deaths and drugs as deadly as flakka washing up on their beach, the secret six realise they are in deep waters and way out of their depth (though that hardly deters them).

The film proceeds at a leisurely pace, with plenty of jokes and even more f-bombs. There are glitz and glamour, babes in bikinis, and over-the-top fight sequences with shirts thrown off and muscles bulging. A lot of the ploys make no sense, like Brody thinking that the best way to go undercover in a kitchen would be crossdressing in the most conspicuous way possible - though seeing Efron all dolled up is worth the lost IQ points. And of course, couples are conveniently paired off, if only to allow for the happily-ever-after kisses at the end. All in all, the movie makes much ado about nothing, with a lot of flashy distractions and little to nothing by way of actual storyline and content.

The cast isn't enough to make the movie spectacular, but they give reliable performances nonetheless. Johnson is everything his character needs - he bears the weight of the movie on his extremely broad shoulders with ease. He is humorous and likeable, and Mitch's passion and dedication towards his job shines through. Zac Efron falls slightly short of expectations, as he fails to properly illustrate his character's turmoil and ultimate change of heart. In terms of comedy, though, he nails it.

Daddario, Hadera and Rohrbach do well enough as the funny, feisty and gorgeous lifeguards, and Jon Bass suits his role as the geeky kid hopelessly in love with the statuesque blonde, a cliché borrowed straight out of The Big Bang Theory. Priyanka Chopra does a fair job, trying her best to appear cruel and ruthless, though she's a bit lacking in the villainous vibe her character requires.

The visuals of the movie are very bright and colourful, giving it a vibrant, summery feel. With beautiful beaches and even more beautiful people, it's certainly easy on the eyes. There is no dearth of shots of people walking, running, and tossing their shiny hair (which is miraculously untouched by the ravages of salt water) in extreme slow motion - thankfully, the movie mocks its own partiality towards such exaggerated clips and makes them more bearable.

The soundtrack is upbeat and catchy, with Sean Paul's No Lie ft. Dua Lipa echoing the atmosphere of the movie - it makes you want to put on a sarong and sunglasses and go dance on a sunny seashore.

Ultimately, Baywatch is an easily forgettable movie that is wiped clean from your mind after you watch it, the way names scratched in the sand vanish without a trace with the waves. But you certainly laugh a lot during the runtime.
Share. Save. Connect.
Tweet
BAYWATCH (TELUGU) SNAPSHOT 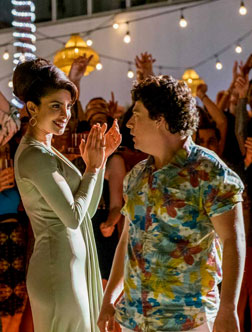 ADVERTISEMENT
This page was tagged for
baywatch movie download in telugu
Bay watch movie download in telugu
bay watch movie in telugu downloads
baywatch movie rulz.com
baywatch movie rulz
Follow @fullhyderabad
Follow fullhyd.com on
About Hyderabad
The Hyderabad Community
Improve fullhyd.com
More
Our Other Local Guides
Our other sites
© Copyright 1999-2009 LRR Technologies (Hyderabad), Pvt Ltd. All rights reserved. fullhyd, fullhyderabad, Welcome To The Neighbourhood are trademarks of LRR Technologies (Hyderabad) Pvt Ltd. The textual, graphic, audio and audiovisual material in this site is protected by copyright law. You may not copy, distribute, or use this material except as necessary for your personal, non-commercial use. Any trademarks are the properties of their respective owners. More on Hyderabad, India. Jobs in Hyderabad.