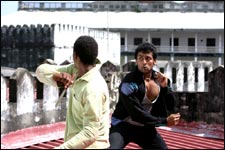 Deepa Garimella / fullhyd.com
EDITOR RATING
5.5
Performances
Script
Music/Soundtrack
Visuals
7.5
7.0
6.5
7.5
Suggestions
Can watch again
No
Good for kids
No
Good for dates
Yes
Wait for OTT
No
There are lines that the fake-CD burners won't cross. There are lines that the passport-fakers won't cross. There are lines that the diamond smugglers will not cross. All of them feel drugs are on the other side of those lines. Drugs make people woozy, making them behave in weird ways. Like the censors behave. Some lines sure look fogged-up, from where the censors are sitting. We're talking of lines between 'showing a body burning' and 'suggesting that the body has been burnt.'

Apart from the gore, Veedokkade has other things that strike you as you watch it. One of them is the title, that makes you wonder who could have given a film like this a title like that. A thriller based on a parallel economy that's dirtier than the underworld, this one's a breather for the starved movie scene, and deserves a less pedestrian title than one that suggests there are 10 fat politicians involved somewhere.

And for some of the well-deserved oxygen, we move to Chennai, where Doss (Prabhu) is the czar of the business of, well, everything illicit, including movie piracy, and smuggling gold and diamonds. However, he has his ethics; he will not do certain things even if offered all the money in the world - namely, deal in drugs.

Deva (Suriya) is his well-educated mentee and his best guy on board. He has company in the form of the small-framed, oily-haired Chitti (Jagan), a huge fan of Doss' who also gets into the ring.

Now, Doss has a competitor who's actually his guru in the business; these two don't tread on each other's toes. But this competitor's son, Kamalesh (Akashdeep Saigal), is a complete spoilsport. He is drunk on the desire to rule the black market, and now wants to resort to the drug trade.

Tamanna plays Yamuna, Chitti's sister and Deva's love interest. She and Suriya have the traditional romance track - a little cute, a little contrived, and mostly entertaining. The build-up to their first scene is a riot, though it's not something you'd want to watch with your elders or children.

The rest of the story is about the dirty double-dealings that Doss and Deva have to encounter. And boy, do they get dirty. The second half has some unbelievably upsetting scenes that are gruesome by concept rather than by appearance. The procedure for the most macabre form of hiding contraband (inside humans) is detailed, and there's a scene of a dying man's body being cut up (they don't actually show it, but keep us at a distance and the baddies 'act' like they're cutting) just so the bootleggers don't lose the crores of money inside the fellow.

You don't need grim reality like this, but Veedokkade's script is a little too well-thought-out for you to complain. The first half has adventure, a little fight sequence that's better choreographed than the songs, and the romance. It engrosses you, and even if the second half is drawn-out (with Koena Mitra popping in with an ill-timed song), there are a few rewarding scenes involving how the law catches up with Kamlesh. The curtains come down on a trivialized transformation of Deva, though, which is disappointing.

Suriya is terrific. And his dubbing artiste is a motormouth. The stubbled Prabhu looks too cultured and intellectual to be a kingpin, but is a treat to watch. Tamanna has done well, and though this isn't a 'role' in the real sense of the word (especially when compared to the barrage of lesser-known films she's starred in recently), it goes on her CV. The person playing Chitti is hard to judge - it's his voice-over that's really expressive.

Like all dubbed movies, Veedokkade has dialogues spoken in a Telugu that's more fluent than in Telugu films. Harris Jayaraj's music isn't oozing depth, but serves as a good cover letter to the already slick visuals.

If you're a Suriya fan, you'd want to catch this one before it leaves town. And if you're not, then you have some questionable options this week.
Share. Save. Connect.
Tweet
VEEDOKKADE SNAPSHOT

ADVERTISEMENT
This page was tagged for
veedokkade review
veedokkade telugu movie reviews
Veedokkade telugu movie
Veedokkade reviews
release date
Follow @fullhyderabad
Follow fullhyd.com on
About Hyderabad
The Hyderabad Community
Improve fullhyd.com
More
Our Other Local Guides
Our other sites
© Copyright 1999-2009 LRR Technologies (Hyderabad), Pvt Ltd. All rights reserved. fullhyd, fullhyderabad, Welcome To The Neighbourhood are trademarks of LRR Technologies (Hyderabad) Pvt Ltd. The textual, graphic, audio and audiovisual material in this site is protected by copyright law. You may not copy, distribute, or use this material except as necessary for your personal, non-commercial use. Any trademarks are the properties of their respective owners. More on Hyderabad, India. Jobs in Hyderabad.