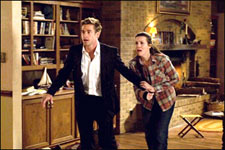 Samrat Sharma / fullhyd.com
Suggestions
Can watch again
NA
Good for kids
NA
Good for dates
NA
Wait for OTT
NA
I was talking to a friend about what constitutes horror the other day. With a large proliferation of torture-centric horror films like the Hostel and Saw franchises, and the various French horror films that focus on the gore and blood to create extreme discomfort, horror has taken up many different angles. What we discussed was what does it make horror for us?

The answer, surprisingly, was atmosphere, and the breaking of a safety net - the threat of losing something tenuous that you have worked very hard to keep: your life, your loved ones, or your family. The Strangers is likely to divide audiences down the same path. It refuses to go down the torture path, and resolutely sticks to the John Carpenter school of exploring human emotion and horror through the bursting of safety bubbles.

My friend and I, we will dig a film with this much atmosphere. This is where it all started for us - fearing for your family, calls coming from inside the house, insane killers hiding and lurking behind shadows. Genre-benders who like their horror with tearing of ligaments, rusty implements and bodily innards being displayed as trophies might be turned off, however. This is not that kind of horror.

Though Bryan Bertino pays homage to multiple horror films of the same school, his movie is resolutely inspired by childhood fears. It's not a haunted house. It's just a lonely little house, and old country place that creaks and thumps and seems to have a life of its own. Despite which, of course, it is the absence of sinister presence that makes it a fertile ground for imagination.

It is unsettling, then, that the events start taking place in the house at close to four in the morning. Daybreak is just around the corner, but the few hours of darkness stretch on forever as the inhabitants of the house are attacked by sadistic psychopaths bent on playing their own games.

Bertino takes maximum advantage of the human tendency to be curious as he stages his film with masterful superiority. When James and Kristen (Scott Speedman and Liv Tyler) arrive at James' parents' house for the night, things are already a bit strained between them. While their relationship is souring, the audience is completely curious about what has happened between them, which makes you notice the small things.

This is when Bertino strikes his best hit - the strangers that arrive and start terrorizing the couple, and subsequently their friend Mike (Glenn Howerton), are all the more menacing because of our heightened state of alertness, and the lack of background noise. Sparse dialogue, minimal music and 100% atmosphere. That's how they did it in the old days, yessiree.

The biggest flaw of the movie, and the one stem that branches into further disappointments, is that Bertino has a bit of a struggle trying to find a thematic anchor for the movie. While horror films have always been awesome vehicles for social commentary, Bertino tries, and then gives up, being that film, instead making one that is thrilling, yet shallow.

Yet, this movie, this little debut feature that Dock 2 points if you're not a horror fan; dock another 2 if you're a Saw fan. But if you're looking for old school horror filmmaking, there are worse examples of the genre out there. tries to exercise our intelligence more than our penchant for voyeurism, stands tall by itself. While Bertino further struggles to maintain the scares and the thrill after a bravura beginning, the character development is rock solid, and keeps us invested. Depending on your taste and preference for horror, your mileage may vary, but I quite enjoyed myself, and thanked for such an interesting debut in recent times.
Share. Save. Connect.
Tweet
THE STRANGERS SNAPSHOT

ADVERTISEMENT
This page was tagged for
The Strangers english movie
The Strangers reviews
release date
Liv Tyler, Scott Speedman
theatres list
Follow @fullhyderabad
Follow fullhyd.com on
About Hyderabad
The Hyderabad Community
Improve fullhyd.com
More
Our Other Local Guides
Our other sites
© Copyright 1999-2009 LRR Technologies (Hyderabad), Pvt Ltd. All rights reserved. fullhyd, fullhyderabad, Welcome To The Neighbourhood are trademarks of LRR Technologies (Hyderabad) Pvt Ltd. The textual, graphic, audio and audiovisual material in this site is protected by copyright law. You may not copy, distribute, or use this material except as necessary for your personal, non-commercial use. Any trademarks are the properties of their respective owners. More on Hyderabad, India. Jobs in Hyderabad.