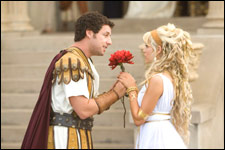 Samrat Sharma / fullhyd.com
EDITOR RATING
5.0
Performances
Script
Music/Soundtrack
Visuals
6.5
2.5
7.0
8.0
Suggestions
Can watch again
No
Good for kids
Yes
Good for dates
Yes
Wait for OTT
Yes
Once upon a time there was an actor who started off as a very funny guy doing SNL skits, moved on to crass but angry edgy film roles as a man-child, and remained there till he crossed forty. Not yet old enough to be Jack Nicholson's understudy in curmudgeonly roles, and no longer young enough to do the same thing, he decided to do what every man in a quandary must do - turn to Disney.

The result, dear children, is a broad comedy with more laughs for children than adults, and an adynamic star can't do anything to salvage this, especially as he no longer knows what he is doing. In a time when Bolt and Wall.E are among the largest grossers, kiddie fare is box-office gold, but when you see Adam Sandler trade in his usual energetic self for a bland comedy, it sure as heck ain't what you'd pay for.

In his thinly written role as Skeeter, Sandler plays yet another resentful character, this time angry at his father's ineptitude at keeping the family business alive, leaving him to clean toilets in a resort built on the same property he was to inherit. This is basically to set you up for a change of heart, and not to unleash Angry Adam at us. Trust me, after an hour or so in, you'd want Angry Adam.

In any case, when his sister (Courteney Cox) asks him to baby-sit for his niece and nephew (Laura Ann Kesling and Jonathan Morgan Heit), he is reluctant and not ready to be nice. He lets them know he doesn't like sappy or happy. Director Adam Shankman takes this moment in the film to turn it into a CGI-laden saccharine sweet montage of hackneyed fantasies concocted by the children.

Skeeter and the rest of the cast go through adventure upon adventure in the Wild West, ancient Greece and medieval England, in which Skeeter is the hero, beating all odds and getting the girl. The girl being Keri Russell, who brightens up the screen every time she makes an appearance, with movie star presence and an understated Disney niceness about her.

Of the supporting cast, Russell Brand is howlarious, playing his absurd role as a joyfully out-of-place character, that breaks the monotony. Any film with Lucy Lawless is not necessarily brilliant is proven beyond a doubt with her hastily written desk clerk role. Guy Peace as the hotel manager, however, is so atrociously hammy, that all goodwill you have for the Oz actor is melted in the span of a half-hour.

Soured by a terrible screenplay, full of holes as if it was laid tautly under a gumball hail, and completely devoid of energy or fun, this film remains a chore to watch in most parts. Somehow, then, there are magical moments lovingly crafted and superbly mounted by the cast and crew that make you believe that all they needed were a better script and a less meddling studio.

There is a simple joy in watching the aforementioned gumball hail, and I wish there were more of those beautifully done moments in the film, or, barring that, more Keri Russell. Unfortunately, the movie remains steadfast on the doomed course it has set out for itself, and in quixotic madness, accomplishes what it set out to do - make the most harmless, charmless film for children.

This is the kind of role that tells us Sandler really wants to grow up in his repertoire, but can't - trapped as he is in his own image and screen personality. A better director can do wonders for the funny man, but till that happens, I'd advise you to go only if your children drag you. Even then, see if you can't just tell them a good old-fashioned bedtime story instead.
Share. Save. Connect.
Tweet
BEDTIME STORIES SNAPSHOT

ADVERTISEMENT
This page was tagged for
Bedtime Stories english movie
Bedtime Stories reviews
release date
Adam Sandler, Keri Russell
theatres list
Follow @fullhyderabad
Follow fullhyd.com on
About Hyderabad
The Hyderabad Community
Improve fullhyd.com
More
Our Other Local Guides
Our other sites
© Copyright 1999-2009 LRR Technologies (Hyderabad), Pvt Ltd. All rights reserved. fullhyd, fullhyderabad, Welcome To The Neighbourhood are trademarks of LRR Technologies (Hyderabad) Pvt Ltd. The textual, graphic, audio and audiovisual material in this site is protected by copyright law. You may not copy, distribute, or use this material except as necessary for your personal, non-commercial use. Any trademarks are the properties of their respective owners. More on Hyderabad, India. Jobs in Hyderabad.