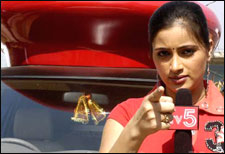 EDITOR RATING
2.0
Performances
Script
Music/Soundtrack
Visuals
6.0
2.0
3.0
3.0
Suggestions
Can watch again
No
Good for kids
No
Good for dates
No
Wait for OTT
No
TV journalists have an exciting life. It can be quite a lot of fun to be standing in a crowded place with a microphone in your hand, and loudly and energetically summarizing an issue and giving your opinion on it, finally concluding with a flourish by mentioning your cameraman's and your name. And if there are actually a camera and cameraman there, you will even look normal.

Satya (Rajeev Kanakala) however leads a life far from normal. An honest reporter of TV5, he displays enormous courage in handling the daunting challenges of his job like covering bank robberies, interviewing deadly naxalites, risking bomb blasts, and working alongside Nakshatra (Navneet Kaur), who wears clothes so tight, you have to stand in queue to wait for them to split.

In Satya's line of fire is Tirumala Das (Suresh), the corrupt and violent local MLA who kills people just to check if they die. Das first tries to buy off Satya with lots of money, but Satya tells him that honesty is the real money, honesty is true power, and honesty is the only way to God, and asks Das what he really has left if he doesn't have honesty. Das is about to answer "mere paas maal hain", but suddenly realizes that this conversation would have been much shorter if Satya were dead.

So Satya finds himself framed in a smuggling rap by the cops who then set out to encounter him. He escapes with the help of some really good friends and really bad stunts, and lands up at the home of Ghajini (Ali), who forgets things every 15 minutes, just like the script-writer of this movie. Here he discovers that many innocent people around him are slowly dying, which is what many people in the audience are also discovering now.

First his friend Raju's body is discovered floating in a well. Then an archeologist dies after falling off a tall building. Next, the archeologist's wife is found dead from an overdose of sleeping pills. Just as you are feeling glad that no one you know is involved, comes also the numbing realization that Navneet Kaur is actually in this movie for her acting skills and not her skin. For 95% of the audiences, that is hitting below the belt, quite literally. Anyway, that's what you get for not checking the censor rating before going for a movie, assuming it must be A just because Navneet Kaur is in it (this is U).

Flash News was one of the 600-odd Telugu films in the cans that somehow miraculously found a release almost a year after it was completed. The bigger miracle will be finding 600 viewers - you can't have Rajiv Kanakala as hero and expect to make money unless the rest of the inputs are outstanding. A strictly return-on-investment focused film, this one doesn't have a single redeeming feature, thanks primarily to extremely mediocre writing.

The movie suffers from a wavering script, banal jokes and sad visual quality, and to add to all that, Rajiv Kanakala is not someone whose intensity sets the screen on fire. Navneet Kaur cannot speak Telugu, and the result is some frustrating lip-sync. Suresh has been around for years, but as a villian in this one, he comes closer to Brahmanandam than to Mukesh Rishi. And Naga Babu as CM makes the movie look more like propaganda than like art or business.

There are 2-3 songs, too, and the placement and quality of the one featuring Navneet Kaur right at the beginning aptly reflects the thinking talent behind this one. As for the songs themselves, if you like the music, you'll probably be interviewed by the media and featured on the 9pm news shows.

To be fair to it, though, Flash News is at least different from most C-rung films in that it doesn't try to use half-naked women to sell itself, but in retrospect, that appears a mistake. To fully cover up a script like this, you need to take away clothes from a lot of women.
Share. Save. Connect.
Tweet
FLASH NEWS SNAPSHOT

ADVERTISEMENT
This page was tagged for
Flash News telugu movie
Flash News reviews
release date
Rajeev Kanakala, Navneet Kaur
theatres list
Follow @fullhyderabad
Follow fullhyd.com on
About Hyderabad
The Hyderabad Community
Improve fullhyd.com
More
Our Other Local Guides
Our other sites
© Copyright 1999-2009 LRR Technologies (Hyderabad), Pvt Ltd. All rights reserved. fullhyd, fullhyderabad, Welcome To The Neighbourhood are trademarks of LRR Technologies (Hyderabad) Pvt Ltd. The textual, graphic, audio and audiovisual material in this site is protected by copyright law. You may not copy, distribute, or use this material except as necessary for your personal, non-commercial use. Any trademarks are the properties of their respective owners. More on Hyderabad, India. Jobs in Hyderabad.