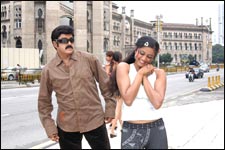 EDITOR RATING
3.0
Performances
Script
Music/Soundtrack
Visuals
7.5
3.0
7.0
7.0
Suggestions
Can watch again
No
Good for kids
No
Good for dates
No
Wait to rent it
Yes
There are times in life when you welcome things more for what cluster of memories they belong to than for what they themselves are. Like when an old school bully you run into several years later elicits warmth simply because of the vignettes of school life he brings back to your mind.

Indeed, it's nice to see Balakrishna back at the box-office. It's been a dreary year for Telugu film buffs, with almost all known faces out of circulation, and Balakrishna was a pivotal part of that hyper-active period of this decade when big-budget movies were the norm, there would be midnight shows all across the hinterland for fanatics who just couldn't wait until the morning of the release date, passions among fans of rival heroes ran high, and our collective consciousness was generally subsumed in the star wars.

So at a time when Tollywood bears almost no resemblance to what it used to be until even 2 years back - Chiranjeevi's gone, Venkatesh makes a movie every 2 years, Mahesh seems to target one every 5, and even Uday Kiran, Raja, Navdeep and even Allari Naresh seem to have vanished - a Balakrishna release feels like a bridge back into those exciting times, or at least a detour through them. Add to that the fact that he himself has been out of circulation for very long, and it's almost a feeling of coming home for most buffs.

Mithrudu is a bad film, like most of Balakrishna's recent releases. And like in all of them, it's mostly the atrocious writing. The overall plot belongs remorselessly in the formula zone, you can see the dialogue-writer's ineptitude through and through in all those instances when you are expecting smart counters or dismissals but are served an adoloscent's default rejoinder for the situation, and the pacing betrays a mind caught in a time warp.

Aditya (Balakrishna) is a silent and moody NRI living in Malaysia, looking scarily like he has a long flashback. A lousy introductory sequence shows him accepting the juvenile challenge of a barely-adult girl looking half his age, in a nightclub that has a demographic profile that would make most people of his generation feel twice as old and embarrassed to be there.

You quickly figure out that he wants to die, but Indu (Priyamani), the sole inheritor of a huge property who's doing her MBA in the same country, wants to marry him after she's seen him single-handedly thwart a bank robbery. She aggressively woos him, and he finally acquiesces. They get married in a rapidfire ceremony, but then it transpires that Indu is in love with someone else, and wants Aditya dead.

Balakrishna has his strengths and his weaknesses in acting, and they are both on display in Mithrudu, though thankfully the latter less so. He's old, and make-up cannot really hide that after a stage. Priyamani has a little more to do than be a glamdoll. The film has Brahmanandam, Dharmavarapu and Krishna Bhagawan in it, but the comedy is rather meagre for Telugu film standards. The fights, however, aren't - the climax especially makes you feel like you are one of the persons getting beaten up.

Mani Sharma scores the soundtrack, and a couple of songs have potential. The movie is close to 2 hours and 45 minutes long, and feels more than that, especially in the second half that drags. And while a good part of the film is shot in Malaysia, it feels persistently like a low-budget film.

Balakrishna has tasted meteoric heights, at one time even being the contendor for the Tollywood throne, and spectacular depths of failure after that, bottoming out (hopefully) with Okka Magaadu. Audiences are getting younger, and for him to get the best possible results, so should his filmmakers. We hope that happens, since he's part of a worthy cluster of memories for all of us, and we all wish him his niche.
Share. Save. Connect.
Tweet
MITHRUDU SNAPSHOT

See Mithrudu full details
MITHRUDU USER REVIEWS
1 - 4 OF 4 COMMENTS
POSITIVE  |  NEGATIVE |  NEWEST  |  OLDEST  |  MOST HELPFUL  |  LEAST HELPFUL
USER RATING
5.5
2 USERS
Performances
Script
Music/Soundtrack
Visuals
5.5
5.0
5.5
5.0
Can watch again - NA
Good for kids - NA
Good for dates - NA
Wait to rent it - NA
mrmark31 on 8th May 2009, 5:03pm | Permalink
This movie is better compared to NBK's previous movies, but below average compared to all other movies
mahi on 7th May 2009, 4:52pm | Permalink
average movie
Sreeni on 6th May 2009, 5:27pm | Permalink
This film is a clean family entertainer. Unlike the editor comments out it as a bad film, unfortunately editor doesn't have a taste. He shoud stop review the films.
yesakure on 3rd May 2009, 3:24am | Permalink
Bala should stopmaking movies. Thats enough.

ADVERTISEMENT
This page was tagged for
Mithrudu telugu movie
Mithrudu reviews
release date
Balakrishna, Priyamani
theatres list
Follow @fullhyderabad
Follow fullhyd.com on
About Hyderabad
The Hyderabad Community
Improve fullhyd.com
More
Our Other Local Guides
Our other sites
© Copyright 1999-2009 LRR Technologies (Hyderabad), Pvt Ltd. All rights reserved. fullhyd, fullhyderabad, Welcome To The Neighbourhood are trademarks of LRR Technologies (Hyderabad) Pvt Ltd. The textual, graphic, audio and audiovisual material in this site is protected by copyright law. You may not copy, distribute, or use this material except as necessary for your personal, non-commercial use. Any trademarks are the properties of their respective owners. More on Hyderabad, India. Jobs in Hyderabad.