The Secret Life of Pets Review 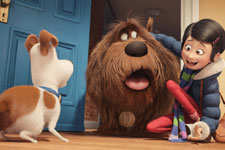 Josh / fullhyd.com
EDITOR RATING
6.0
Performances
Script
Music/Soundtrack
Visuals
7.0
5.0
6.0
8.0
Suggestions
Can watch again
No
Good for kids
Yes
Good for dates
Yes
Wait for OTT
No
You are probably aware of that story where Akbar draws a line on a paper and asks Birbal to make it shorter without erasing the line or cutting the paper. Birbal's wise answer is to draw a longer line next to it. Watching The Secret Life Of Pets gave you a similar feeling.

The Secret Life Of Pets is a perfectly fine line... er, perfectly fine film. Cute, inoffensive, well-voiced, splendidly animated, and often funny, it doesn't have anything you can complain about. However, in an environment where movies like Zootopia are releasing and being lapped up, films like this can fall short.

Like when you take a plot which is a collection of contrivances. A pet dog Max (Louis CK) loves his owner (Ellie Kemper) who gets another dog Duke (Eric Stonestreet) to give Max company. A long while is spent on the rivarly of the two dogs. Then they get lost in the big city, which prods Max's admirer Gidget (Jenny Slate), a posh pomeranian, to line up all the other pets to launch a search for Max and Duke. The getting lost, the search and the villains in the story are all pretty contrived. Nothing at any point seems inevitable or reasonable.

The villains we mentioned are a bunch of animals who hate humans and are fighting against domestication. We understand that we aren't supposed to look for sense in a film where dogs are speaking to each other in English, but can anyone deny the fact that things still somehow make sense in films like Monsters Inc? Or Kung Fu Panda or Zootopia? What we mean is these films tell actual stories instead of stringing in a file of convenient contrivances just to create a 90-minute runtime with cute animation.

So pop goes any thematic heft which makes you ponder (like with that predator-prey commentary in Zootopia). Nor is there an alternate universe so meticulously and consistently constructed that you can just marvel at the conceptual ingenuity (like you would with Monsters Inc.). Lastly, you'll find no genuinely moving scenes which squeeze those sponges in your eyes (like in a number of Pixar releases).

So there isn't much for the adult viewer in this film. The entire focus is on high quality animation with some wonderful 3D scenes, and the talented voice cast make it work better.

So if you can find your inner child who'll douse himself in visual wonder and not worry about more adult pleasures, you can have some profitable time at the cinema with this one. Your kid is going to love it at any rate.
Share. Save. Connect.
Tweet
THE SECRET LIFE OF... SNAPSHOT
THE SECRET LIFE OF PETS SNAPSHOT 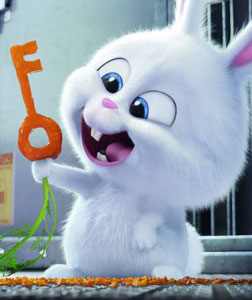 ADVERTISEMENT
This page was tagged for
The Secret Life of Pets english movie
The Secret Life of Pets reviews
release date
Louis C K, Eric Stonestreet
theatres list
Follow @fullhyderabad
Follow fullhyd.com on
About Hyderabad
The Hyderabad Community
Improve fullhyd.com
More
Our Other Local Guides
Our other sites
© Copyright 1999-2009 LRR Technologies (Hyderabad), Pvt Ltd. All rights reserved. fullhyd, fullhyderabad, Welcome To The Neighbourhood are trademarks of LRR Technologies (Hyderabad) Pvt Ltd. The textual, graphic, audio and audiovisual material in this site is protected by copyright law. You may not copy, distribute, or use this material except as necessary for your personal, non-commercial use. Any trademarks are the properties of their respective owners. More on Hyderabad, India. Jobs in Hyderabad.