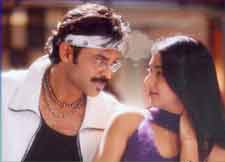 Smriti Kashyap / fullhyd.com
EDITOR RATING
6.0
Performances
Script
Music/Soundtrack
Visuals
NA
NA
NA
NA
Suggestions
Can watch again
NA
Good for kids
NA
Good for dates
NA
Wait for OTT
NA
If you thought Urmila looked cute in a pair of calf length capri pants, then wait till you rest your blips on dear old Venky in his capris (just ignore those hairy legs, please!). With a freshly cultivated patch of fungus on his lower lip that would make Jeeves turn over the bacon in a hurry, he looks like a million dollars and counting. All dressed up and raring to go, Venky makes a dhamaal impact in his latest offering Vaasu.

Not as insane as Nuvvu Naaku Nachchaav, Vaasu makes for a less intense bout of the bubonic plague as it leaves us giggling and spluttering, but unfortunately doesn't leave us dying and begging for more.

Lord Of The Rings Vaasu (did ANYBODY see those mega circles around Venky's eyes?) is a 'cool dude' hanging around his college campus years after he's passed out, trying not to get into the IPS. His heart lies in making music, and going by all the songs that punctuate this weird fetish of his, Cacofonix would have not found a more suitable mentor. Anyway, he's into music big time, and when not passing around knuckle sandwiches by the bucketful, dogs his father's angry glances and reprimands.

His Dad, of course, is an IPS officer, and would like to see his son paddle around in the same boat. Sister Radhika, like all filmi behenas, has a soft spot for her bro, and goes about encouraging his talent by gifting him state-of-the-art keyboards (one step short of being a deemed space shuttle by NASA) and generally howling around her 'annayya' at the drop of a note. Sheesh, I had half a mind to strangle her with a rakhi - stop crying, girl!

The saga continues with some glycerin rich scenes coupled with songs marking the end of each statement spoken by the lead actor. Love blossoms in the air with Divya (Bhumika) stepping in at the bus stop and Venky going all gaga over the femme who's obviously oblivious to the collective benefits of powder, pancake, lipstick and blush.

Taking a cue from the first half, the second half is a continuation of the same movie wherein love almost comes to full bloom between Venky and Bhumika, only to have some vile pesticide sprayed in its face, and a threatening looking gardener in the form of marriage to another person looming large in the atmosphere.

To hold the sweater by the neck and unravel the whole thing, what happens is that Bhumika's Dad and bro turn up one day, and shaadis are fixed by the bulk. The bro is to supposedly get married to someone else (but ends up marrying Venky's sis because they love each other) and Bhumika is supposed to marry somebody else altogether. Venky of course is understandably depressed.

I guess they could have easily avoided this piece of nasty fate if only they had opened their gobs and communicated. I have always harped about the importance of communication in relationships - you must COMMUNICATE, say something, even if it is 'I'm jumping off Mt. Kiliminjaro'. Obviously the lead pair had missed this part of my session, and hence there are the painful senti scenes that we, the paapam crowds, have to endure time and over again. And by the time Venky wins a mega music contract and love is duly expressed, we are at our wits' ends, and squirm in our seats like freshly vaccinated babies.

Vaasu is a fairly decent flick that puts the theory of elasticity to good use. It stretches like nothing's ever been stretched before. Interspersed with identical sounding songs, bits and pieces of comedy (Sunil is wasted), one heroine with only four expressions (Bhumika with her trade mark 'cutesy' pout, ' puzzled' pout, 'hurt' pout and, of course, the quintessential 'pout' pout) and the usual rona dhona, Vaasu manages to pull through. Just when you begin to really enjoy the flick, they shove the songs and high morality dialogues in your face. Cut us some slack, guys - we had to stand in queues to get tickets.

We will be kinder on Venky as he dabs some under-eye cream under his 50-something eyes, and cheer on the second best thing to happen to Telugu cinema - the first being 'Telugu'. And if for some unknown Biblical reason you can't locate the theater, just go by the loud cheers!
Share. Save. Connect.
Tweet
VASU SNAPSHOT

ADVERTISEMENT
This page was tagged for
Vaasu review
vasu movie sister character name
Vasu movie girl sexy
vasu mevi sangs com
Vasu telugu movie
Follow @fullhyderabad
Follow fullhyd.com on
About Hyderabad
The Hyderabad Community
Improve fullhyd.com
More
Our Other Local Guides
Our other sites
© Copyright 1999-2009 LRR Technologies (Hyderabad), Pvt Ltd. All rights reserved. fullhyd, fullhyderabad, Welcome To The Neighbourhood are trademarks of LRR Technologies (Hyderabad) Pvt Ltd. The textual, graphic, audio and audiovisual material in this site is protected by copyright law. You may not copy, distribute, or use this material except as necessary for your personal, non-commercial use. Any trademarks are the properties of their respective owners. More on Hyderabad, India. Jobs in Hyderabad.