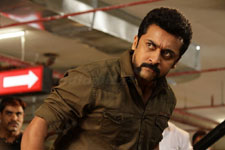 Ajay Kumar R / fullhyd.com
EDITOR RATING
5.0
Performances
Script
Music/Soundtrack
Visuals
7.0
4.0
5.0
5.0
Suggestions
Can watch again
No
Good for kids
No
Good for dates
No
Wait to rent it
Yes
"It's a bird... It's a plane... It's a lion... No - it's Suriya!" exclaimed audiences after they saw the 35-something actor turn a commercial success in Singham 1 (Yamudu). The second edition of the series, too, saw raucous hoots for the superhuman cop as he landed kicks and punches like a demigod. And his signature Lion Claw - who would forget that?

So, director Hari, the creator of the Singham franchise, brings the reel-Hercules back in another volume of the blockbuster action series. But like Frankenstein, Hari's entertaining monster has killed the franchise, as the latter tries to do the same thing all over again trapped as Singham is in an image now.

An honest Police Commissioner is allegedly murdered by a local don, M S Reddy, in the port city of Visakhapatnam. Durai Singam (Suriya), who has won the department's appreciation for his counter-mafia operations in the past, is appointed by the CBI to track down the accused. As Singam, with the help of his team and a hacker (also an atoning inmate), zeroes in on the murderer's location, he finds out that Reddy is a mere pawn in the battle and that there is a bigger fish - an international biohazard waste syndicate.

The Indian-owned organization exports medical- and e-waste, most of it banned hazardous substances, from Australia to the dumping grounds of India, and in the process makes billions of Australian dollars while indirectly killing hundreds of poor people surrounding the dumping yards. Singam now has to travel across continents to nail the kingpin. And he does this with energy, emotion, commitment, and a lot of tethers for those blue-collar stunts. But in the process, the director undermines and oversimplifies the perilous task of being part of the police, and brushes aside international security protocols.

Singham 3 uses the skeleton of its predecessors for its story. The top cop gets a promotion, is sent off to nab a tycoon and is being stalked by a woman (Agni, played by Shruti Haasan) other than his wife (played by a disinterested Anushka Shetty); the tycoon has far-reaching connections; the chase goes international for a while; and it all ends in a noisy battle of fists, boots, a badly designed CG lion, boisterous expositions and a bullet to the chest.

Most of that may have worked earlier, but Singam 3 lacks the sensible script or the immaculate direction of the first edition. There are serious flaws in its depiction of how the police department works, there are tons of vacuous comedy thrown in between, the editing department hasn't bothered to at least make the transition between those scenes smooth, and the villain (Vittal Prasad played by Thakur Anoop Singh), despite having a hulking body, lacks the ferocity, wits or skill that Prakash Raj embodied in the first segment of the anthology whose success he was a key part of.

Suriya remains unchanged with his thunderous voice and screen presence. This is a film crafted especially for him and his die-hard fans, and he excels in it. Anushka Shetty doesn't appear much on screen, and looks either worried or stone-cold throughout the movie. Sharat Saxena as a secondary antagonist acts quite well but isn't impressionable. Shruti Haasan emotes well in brief screen time she is given, but her role is something you cannot appreciate. Anoop Singh, as mentioned earlier, tries to hide his hideous acting skills with even more hideous makeup (what's up with that hair?).

Singam needs a major change in its soundtrack and music - Harris Jayaraj gives you the trademark loud noises that will make your ears bleed. His beats and sounds don't evoke excitement or thrill, but do invoke annoyance. And all the bass and surround sound make it a tasteless experience. Jayaraj's image as an upbeat music director is slowly fading. The cinematics (Priyan) are, again, trite, and the graphics have been crafted insincerely. The camera angles are too fast and give you migraines.

Amid the hapless direction, Suriya's autotuned loud voice, the terrible dialogues and acting from the supporting cast, innumerous punchlines and illogical script, it is up to Suriya to save this one. It might not be a task even he is up to.
Share. Save. Connect.
Tweet
SINGAM 3 SNAPSHOT 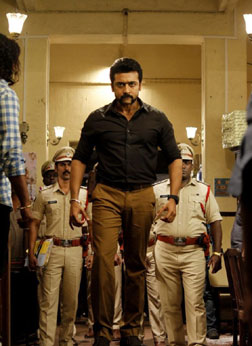 ADVERTISEMENT
This page was tagged for
Singam 3 download movie Telugu
singam 3 movie telugu download
singam 3 full movie Telugu hd download
singam 3 movie dwonload hd telugu
singam 3 telugu movie download hd 720p
Follow @fullhyderabad
Follow fullhyd.com on
About Hyderabad
The Hyderabad Community
Improve fullhyd.com
More
Our Other Local Guides
Our other sites
© Copyright 1999-2009 LRR Technologies (Hyderabad), Pvt Ltd. All rights reserved. fullhyd, fullhyderabad, Welcome To The Neighbourhood are trademarks of LRR Technologies (Hyderabad) Pvt Ltd. The textual, graphic, audio and audiovisual material in this site is protected by copyright law. You may not copy, distribute, or use this material except as necessary for your personal, non-commercial use. Any trademarks are the properties of their respective owners. More on Hyderabad, India. Jobs in Hyderabad.