Nupur Barua / fullhyd.com
EDITOR RATING
3.0
Performances
Script
Music/Soundtrack
Visuals
4.0
3.0
4.0
5.0
Suggestions
Can watch again
No
Good for kids
No
Good for dates
No
Wait to rent it
No
The unabashed regularity with which Hollywood churns out B-grade horror/slasher/psycho movies and manages to get the spectators rooting for more, is commendable. In short, there is always an audience for this rather overexploited genre, and therefore, it is not surprising that a movie like Shark Night is released in India, and in 3D, no less.

And unforgettable it is. The girls rush to strip into bikinis and the boys run equally fast to do their "dude" stuff (readying the boat, arranging for booze, etc.), and off they all go on a whoop-filled adventure that involves skin show and water-skiing. And then Malik falls into the water and loses an arm. Turns out that there are sharks in the lake - an impossible phenomenon. The group surmises that somebody put those man-eating animals there, but who, and more importantly, why?

One gruesome death follows another, as the youngsters try to get to the bottom of the mysterious existence of sharks (all kinds) in the lake. Sheriff Sabin (Donal Logue) is clueless, and Sara's ex, Dennis (Chris Carmack) and his psycho-violent sidekick Red (Joshua Leonard) are not of much help either.

As the movie progresses, and the teenagers take it upon themselves to attack the sharks, it soon becomes apparent that the antagonist responsible for this misery is one amongst them.

A couple of horror enthusiasts wrote this rather amateurish story and plot, and while that is forgivable, what is not is the fact that it was made into a movie. One expected better from director David R Ellis, the man who gave us Snakes On A Plane and The Final Destination.

Sara may have planned the whole holiday, but she looks inexplicably restless and spaced out while people die all around her. It later transpires that she is indirectly responsible for the sequence of events that lead to a grisly massacre, and you are left wondering why she is so inspiring to a group of seriously insane psychopaths. The reason for the cameras inside the sharks is equally bizarre, and your head will reel with all the useless and inane information that the rest of the unnecessarily complicated OTT plot has to offer.

The technicalities of the movie are far superior to the plot, and the cinematographer has managed to capture some great visuals both on and under the surface of the water. This is somewhat marred, however, by the very obvious CGI sharks (albeit a large variety of different types of sharks), which look a little comical, almost cartoonish. There is not much in terms of production design and costumes (mostly bikinis), and the background music is a little too loud.

Sara Paxton and Dustin Milligan perform as best as they can, although the latter would have been more convincing as a stud, with his chiselled body. Chris Carmack as the jilted ex-lover is the star in the movie, but the superstar is the dog, a labrador, which displays extreme restraint in its portrayal of man's best friend. Look out for the scene where it passes out, and when it is about to become shark food. Each cast member is sincere in his or depiction of character, and that is a saving grace in this otherwise banal movie.

The 3D is wasted in Shark Night - it enhances the flaws (like the sharks and the amputated arm) and downplays the exciting bits (like the underwater bikini bodies). Watch the movie only if you are a fan of B-grade horror movies of Hollywood (and there are quite a few this year alone - a prime example being Piranha 3DD), and you may just end up laughing through all the blood and gore.
Share. Save. Connect.
Tweet
SHARK NIGHT (3D) SNAPSHOT 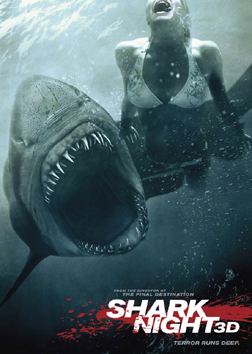 ADVERTISEMENT
This page was tagged for
Sara paxton fainted shark night 3d
Shark Night (3D) english movie
Shark Night (3D) reviews
release date
Sara Paxton, Dustin Milligan
Follow @fullhyderabad
Follow fullhyd.com on
About Hyderabad
The Hyderabad Community
Improve fullhyd.com
More
Our Other Local Guides
Our other sites
© Copyright 1999-2009 LRR Technologies (Hyderabad), Pvt Ltd. All rights reserved. fullhyd, fullhyderabad, Welcome To The Neighbourhood are trademarks of LRR Technologies (Hyderabad) Pvt Ltd. The textual, graphic, audio and audiovisual material in this site is protected by copyright law. You may not copy, distribute, or use this material except as necessary for your personal, non-commercial use. Any trademarks are the properties of their respective owners. More on Hyderabad, India. Jobs in Hyderabad.