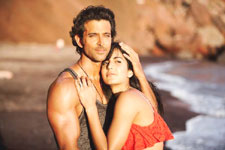 Kritika Deval / fullhyd.com
EDITOR RATING
3.5
Performances
Script
Music/Soundtrack
Visuals
3.5
1.0
4.0
4.0
Suggestions
Can watch again
No
Good for kids
No
Good for dates
No
Wait for OTT
No
Once upon a time, there was a movie with "Tom Cruise is nuts and Cameron Diaz is goof-dorable" as its raison d'etre. The story, if it can be called as such, was a convoluted mess that would give you brain damage to keep up with, but the movie worked because all those involved knew how ridiculous the whole thing was, and went ahead and had fun with it. Then, Bollywood piped up with a "Me too!", took the fun out, left in the "convoluted mess" part, and got Tinseltown's prettiest mannequins to move the plot along.

Thus, readers, we get Bang Bang!, a movie which, despite its flighty origins, is exactly as unobvious as its title, which is, not in the least bit.

Let's get what passes for the story out of the way first. Harleen Sahni (Katrina Kaif) is a ditzy receptionist who is lonely enough to sign up for a blind date. Wishful thinking leads her to mistake the hunky Rajveer (Hrithik Roshan) for her date, and the two hit it off, or at least that's what the film wants you to think.

However, hunky Rajveer turns out to have more to him than meets the eye, shocking as it seems considering just how much of him does meet the eye, and he soon drags Harleen into the aforementioned convoluted mess involving the Kohinoor diamond, an internationally wanted man (Danny Denzongpa), exotic locales, and product placement blatant enough for the film's team to be able to foot the bill for said locales.

"How blatant can it possibly get?" we hear you asking. And we replay the scene in our head in which Hrithik downs a can of Mountain Dew, and halts all action to enunciate the words - "Kyonki Darr Ke Aage Jeet Hai".

All this chaos spread out over more than two-and-a-half hours would probably have been more bearable if we were given something more than Hrithik Roshan's impossibly handsome self to distract us. However, that does not seem to be on the cards, and so you have to settle for a story filled with characters Bollywood thinks are quirky, but in reality are exactly as mundane as anybody you can think of.

For instance, in Tom Cruise's Knight And Day, an unconventional Cameron Diaz refurbishes antique cars for fun. In Bang Bang!, a supposedly unconventional Katrina Kaif is socially awkward with a "cool" granny, a definition of "quirky" that Bollywood seems to think is irresistible. Hey Bollywood! We're socially awkward! Where's our happy ending with an invincible hunk?

The much-touted action sequences look shiny and loud enough, but are thoroughly uninspired, and the film's separation from logic due to irreconcilable differences doesn't help. The various locations all over the world are captured with such monotony that a slideshow of HD wallpapers could've done the job. The music goes beyond uninspired to reach utterly mediocre, however much you will have to suffer the soundtrack's presence on all charts in the upcoming months.

While Hrithik occupies the screen well enough, he seems to be taking the role much too seriously, as does the plot itself for a movie this ridiculous. Katrina seems as unconvincing in her role as she seems unconvinced herself, which (hint) is enough to derail otherwise okay scenes. The biggest killer is the utter lack of chemistry between our leads, no matter how much you want to believe that all it takes to set the screen on fire is two impossibly beautiful people sharing space on it.

Whether it is a lighthearted potboiler you're looking for this weekend, or a hot couple turning the heat up - walk away, people! There's nothing to see here!
Share. Save. Connect.
Tweet
BANG BANG SNAPSHOT 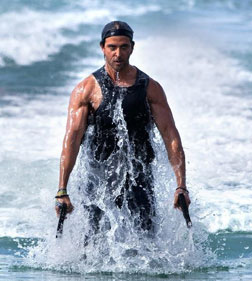 See Bang Bang full details
BANG BANG USER REVIEWS
1 - 4 OF 4 COMMENTS
POSITIVE  |  NEGATIVE |  NEWEST  |  OLDEST  |  MOST HELPFUL  |  LEAST HELPFUL
USER RATING
6.0
1 USER
Performances
Script
Music/Soundtrack
Visuals
NA
NA
NA
NA
Can watch again - NA
Good for kids - NA
Good for dates - NA
Wait for OTT - NA
funky on 9th Oct 2014, 8:20pm | Permalink
One star for Hrithik's body & screen presence, one star for his dancing and one star for screen visuals. Total 3 stars. There is nothing else to see in this movie. Producers must be filthy rich to pour 180 crores into this movie with such pathetic script, jumbled screen play and confused direction. How on earth can anyone invest such money on a person who bored us to death with movies like Ta Ra Rum Pum, Anjaana Anjaani???
Booyakasha on 6th Oct 2014, 10:03am | Permalink
I didn't like Knight & Day so was expecting this to be utter crap. To my surprise however found Bang Bang to be a paisa vasool entertainer. The chemistry between Hrithik and Kats really works. The music isn't as bad as its made out to be in this review and the ever underrated Javed Jaffrey could've been given a meatier role. Harmless fun guys. I say watch it.
RATING
6
vasanth on 6th Oct 2014, 6:03am | Permalink
This is a decent movie. I see no reason why this movie was rated low. Though this being a official remake of 'Knight and Day', this has been perfectly adapted. The way the star cast has shown the romaic chemistry was awsome. Never seen a romatic action movie in bollywood with such a fun involved. Though the story was predictable, but the who movie goes on a smotth romatic action drive. Never felt bored even for one scene. Musci cinematography were good. You will regret watching this movie on TV later realizing this is a theater movie. This is the first time I am writing such a review as felt this movie worth a pat on back as need more such movies. Last thing forgot to mention - This movie has no resemblence to 'Dhoom' or any other action thriller, this is a sweet romantic action which the star cast has excelled.
Aswattha on 3rd Oct 2014, 10:46am | Permalink
Review is bang on. Movie is monstrously stupid and expect its audience to leave not only their brains but also all their senses at home.

Colossal waste of money. Only reason to see the movie is to watch Danny on screen as a villain after a long time. Else sheer waste.

Hrithik Roshan looks so over muscular that i am afraid he will die of dehydration if he does four shirtless scenes in a row.

Everybody knows that Katrina kaif cant act and she doesn't disappoint people by showing any acting prowess worth mentioning.

Director ropes in Katrina whose strong pint is her dancing and then doesn't give her any dance number there by killing any chance of salvaging even a bit of movie.

Siddharth Anand (Director) must be great in sales for his ability to find a producer to spend 150 crores on a dud like this especially when the directors resume includes idiotic movies like Ta ra rum pum.

Watch the trailers, Promos & songs that are already on YouTube and that's enough. There is nothing else in the movie.

ADVERTISEMENT
This page was tagged for
Bang Bang hindi movie
Bang Bang reviews
release date
Hrithik Roshan, Katrina Kaif
theatres list
Follow @fullhyderabad
Follow fullhyd.com on
About Hyderabad
The Hyderabad Community
Improve fullhyd.com
More
Our Other Local Guides
Our other sites
© Copyright 1999-2009 LRR Technologies (Hyderabad), Pvt Ltd. All rights reserved. fullhyd, fullhyderabad, Welcome To The Neighbourhood are trademarks of LRR Technologies (Hyderabad) Pvt Ltd. The textual, graphic, audio and audiovisual material in this site is protected by copyright law. You may not copy, distribute, or use this material except as necessary for your personal, non-commercial use. Any trademarks are the properties of their respective owners. More on Hyderabad, India. Jobs in Hyderabad.