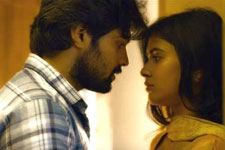 Sonali Dabade / fullhyd.com
EDITOR RATING
4.5
Performances
Script
Music/Soundtrack
Visuals
5.0
4.5
6.0
4.5
Suggestions
Can watch again
No
Good for kids
No
Good for dates
Yes
Wait to rent it
No
24 Kisses courted controversy even before it was released - people were turning up their noses at the story even before listening to it. And to be honest, it is a brave experiment, because however much of a modern outlook we claim to have, we still cringe a bit or become uncomfortable when we see a kiss on screen. Fortunately, it would be safe to say that watching 24 Kisses will give only half the movie-watching population a heart attack.

Anand Kumar (Adith Arun) is a filmmaker who makes children's films. The plight of lakhs of homeless children breaks his heart every single day, and he even starts undergoing therapy. He isn't as successful as he'd like to be, but is good enough that he is sometimes invited to teach a filmmaking course to mass communication students, of whom Sri Lakshmi (Hebah Patel) is one. Anand and Sri hit it off, with each approaching the other on some pretext or another.

During this course, with a background story narrated about the historical significance of 24 kisses, the main couple steal 23 kisses. They even end up in Goa. Sri's father, played by Naresh, is super cool about her leaving for Goa without telling him. All he says is "take care" when she actually calls him from the train to tell him. Wow.

And then comes the conflict. Anand is someone who has a truckload of commitment issues in addition to all the world's problems he takes upon his shoulders every single day. So when a day comes that Sri demands some sort of a commitment from him after telling him she loves him, he panics and backs off. Though, in his defense, he had told Sri nothing but the truth, and his past relationships shouldn't actually matter to her. What happens when Anand tries to justify himself and his changing feelings, and separate his ideologies from reality, forms the rest of the story.

Going by the title, it's easy to guess what anyone would go expecting from 24 Kisses. And yes, there are quite a few kisses in there - some aesthetically shot, some less so. But for the most part, they lack the emotion and are quite unconvincing. Besides, some aren't even necessary in there. We must give credit to the makers, however, for having tried to bring the concept of a modern relationship to Telugu cinema - one where not everyone is ready to jump into the next stage of a relationship at the drop of a hat.

However, you can't be so forgiving of the script. Both the principal characters are inconsistent and have their flaws, but while you try to understand this and go with the flow, many a time it comes to the point where you just want to shake the characters till their teeth rattle. Using the old school thought that men run away from marriage and that women are programmed to want marriage and kids is not something that furthers the movie's cause. The film also tries to normalize things that we would hate in real life, like lies by omission and emotionally manipulating someone into "admitting" they want to be in a relationship.

The slow pace and unnecessary length of the movie don't help either. If only it had been chalked out and edited better, there might have been a pretty decent work on display.

Adith Arun and Hebah Patel make for good romantic leads, and it's a pity the writing doesn't allow them to explore their characters better. They uncannily resemble Madhavan and Pooja Hegde respectively, and that's another disconcerting thought that just doesn't go away. Rao Ramesh as Anand's psychiatrist tries to bring in some humour, but only just manages to make you smile. Naresh brings a little bit of stability whenever he is on screen, but when he says that women are programmed to want marriage and kids, all the goodwill for him flies out of the window. The remaining cast is forgettable.

Joi Barua's music partly redeems the movie. There are a few hummable songs like Jaago Jaago, Praana Brundhavanam and Ee Samayam Naa Hrudayam that stand out, though the rest of the musical fare is still average. The editing, as we mentioned, could have been so much better. It's hard to say if the editing in itself was bad and took the movie to 143 minutes, or if it was a cheesy nod to the appropriate number. But the likelihood is that the vision of the movie that the director tried to showcase was overshadowed by the lazy editing.

You will not hate 24 Kisses if you're arm-twisted into watching it on a date, but if you have an option, choose Netflix and chill instead.
Share. Save. Connect.
Tweet
24KISSES SNAPSHOT 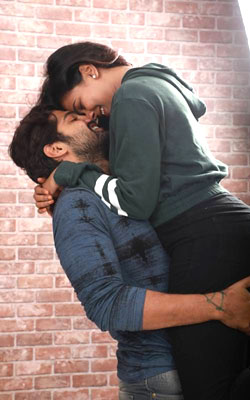 ADVERTISEMENT
This page was tagged for
24Kisses telugu movie
24Kisses reviews
release date
Hebah Patel, Adith Arun
theatres list
Follow @fullhyderabad
Follow fullhyd.com on
About Hyderabad
The Hyderabad Community
Improve fullhyd.com
More
Our Other Local Guides
Our other sites
© Copyright 1999-2009 LRR Technologies (Hyderabad), Pvt Ltd. All rights reserved. fullhyd, fullhyderabad, Welcome To The Neighbourhood are trademarks of LRR Technologies (Hyderabad) Pvt Ltd. The textual, graphic, audio and audiovisual material in this site is protected by copyright law. You may not copy, distribute, or use this material except as necessary for your personal, non-commercial use. Any trademarks are the properties of their respective owners. More on Hyderabad, India. Jobs in Hyderabad.