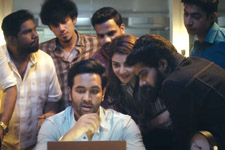 Anil Bandhakavi / fullhyd.com
EDITOR RATING
4.0
Performances
Script
Music/Soundtrack
Visuals
5.0
3.0
5.0
4.0
Suggestions
Can watch again
No
Good for kids
No
Good for dates
No
Wait for OTT
No
Hollywood films about perps from a foreign land wreaking havoc on American soil are pretty common. There are also the occasional Indian films about local heroes who prevail in a border conflict. However, Mosagallu, written by Vishnu Manchu and directed by Jeffrey Gee Chin, is about a group of Indian scammers who target innocent Americans in a scheme to make money. It's hard to tell whether this is humility or arrogance, or simply an awareness campaign, but the story apparently addresses what's happening in the fringes of the call centre world.

Arjun (Vishnu Manchu) and Anu (Kajal Agarwal) are fraternal twins born ten minutes apart, who learn quite early in life that money, like water, is an essential ingredient for survival. As children, they witness their father, Mukund (Tanikella Bharani), repeatedly get swindled for the little that he has. Although their hearts ache for their father who continues to work hard to feed the family, they fail to seriously consider his words about earning money with dignity.

Years later, as adults, Arjun and Anu are still living in the same Ranigunj apartment where they grew up as kids. Arjun is stuck in a call centre job with dreams to fly high one day, and Anu makes a living selling SD cards out of their apartment. Arjun's boss, Vijay (Navdeep), notices a streak in Arjun that's fit for something beyond call centre work. They both decide to collaborate in a scheme in which they target innocent Americans, pretending to be the IRS (Internal Revenue Services), and extract money in the form of back taxes owed to the government.

Arjun is a little uncertain about the scheme at first, remembering his father's words about unfailingly sticking to the right path. However, Anu, who always exerts her ten minutes of seniority on Arjun, convinces him that this is a break they deserve. Things take off at first and they quickly blow up into an enterprise, but conflicts between senior members, and the threat of getting busted by the ever-watchful ACP Kumar (Sunil Shetty), take things down a rocky path for these scamsters who're quickly getting used to living the good life.

Mosagallu, like many thrillers that don't make the cut, establishes a decent plot, and tightens it further at the subsequent points of conflict, but fails to deliver a convincing unravelling of details in the end. The visual presentation of the film appears like the makers got stuck reconciling a fast-paced Hollywood feel with characters that are working in an Indian setting. And when a scam call is placed, the American targets look like actors out of cheap TV ads for arthritis pills. It is also unclear whether the scammers' fake American accents are supposed to highlight the gullibility of their targets or underrate Indian audiences.

Scenes with investigators on the American side are presented with a jarring Telugu voiceover overlaying the original English, which gets quite annoying, especially when you're trying to keep track of the story. This is actually an interesting predicament for the filmmakers because they cannot make these characters simply speak in Telugu. On the other hand, if these scenes were entirely in English, they'd have to use Telugu subtitles, but many local audiences are probably more comfortable reading English over Telugu. So what is left is this noisy Telugu foil of the English lines. There must be a better solution.

From a storytelling standpoint, subtlety is thrown out the window as Arjun, Anu and their partners move operations to a sleek and swanky setting, as if they're some kind of hot, young tech start-up that is just scaling into its 2.0. Employees are partying, drinking and doing drugs, and no one seems to question the legitimacy of a seemingly opulent business that still pays them in cash. The intention here might be to depict a group that gets carried away by their success, but there is always a form of discreet behaviour on the flip side that's not shown, making the film seem disconnected from reality.

The performances are okay, but could have been better had the script not presented its characters in such an over-the-top fashion. There is too much emphasis on making the bad guys look cool and hip. Instead of a natural representation of how a story like this would actually play out, being very mindful of depicting accurately the various settings, the writing and visuals look like they're imitations of some ill-set benchmark.

Mosagallu ultimately falls flat in its attempt to emulate slick Hollywood crime-thrillers. It would have been more fruitful to truly explore what such a story would like for India, but maybe this is a more expensive process. The technical shortcomings are what make it hard to take this movie seriously.
Share. Save. Connect.
Tweet
MOSAGALLU SNAPSHOT 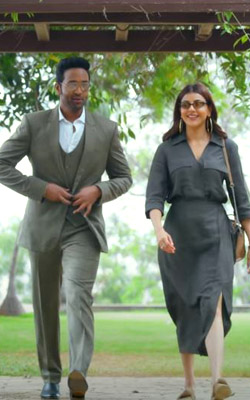 ADVERTISEMENT
This page was tagged for
Mosagallu telugu movie
Mosagallu reviews
release date
Vishnu Manchu, Kajal Agarwal
theatres list
Follow @fullhyderabad
Follow fullhyd.com on
About Hyderabad
The Hyderabad Community
Improve fullhyd.com
More
Our Other Local Guides
Our other sites
© Copyright 1999-2009 LRR Technologies (Hyderabad), Pvt Ltd. All rights reserved. fullhyd, fullhyderabad, Welcome To The Neighbourhood are trademarks of LRR Technologies (Hyderabad) Pvt Ltd. The textual, graphic, audio and audiovisual material in this site is protected by copyright law. You may not copy, distribute, or use this material except as necessary for your personal, non-commercial use. Any trademarks are the properties of their respective owners. More on Hyderabad, India. Jobs in Hyderabad.