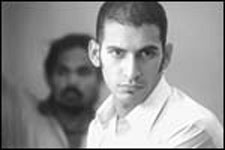 Xen (Rehan Engineer) is a barber - pardon me all over the place, a hair dresser - with an upmarket salon situated bang opposite Domino's. I don't know about the flick, but I sure did notice the Pizza outlet! Now a clean desk is a sure sign of a cluttered desk drawer, and underneath the grim farmyard fowl expression of his, Xen spends 90% of his time reading his customers' minds whilst snipping away the ends of their hair. The other half of the time he spends in an airless room freaking about the freak accident of his bachpan which killed his parents and left him and his salon workers with freak British accents. Talk about the remains of the Raj. 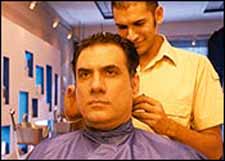 Anyway, apart from reading his clientele's open minds (you could actually feel the breeze from here), he plays the nice-guy-flapping-angel wala bit to perfection by bailing people out of their miseries by just about doing the right thing at the right time.

While he de-tresses his customers, we come across a whole bunch of characters, from socialites going all hiss-hiss-snarl over each other to a bunch of prurient teens pawing in the shadows of the salon. And we watch Xen's life begin and end within the eight walls of his building (the other 4 walls being those of his room). 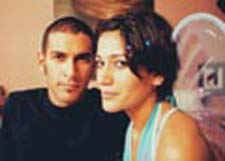 The movie braids the stories of their lives into an interesting tale as we catch a glimpse of Pooja Bhatt - who's been shown the door and a chawl by her philandering husband - struggling to cope with the loss of her social standing and her son (in whichever order you would like to see it!); Boman Irani, businessman and abusive father-with-the-moral-code-of-a-tomcat, off to the Bahamas to paddle his daughter like a canoe; and saucer-eyed whacko Rahul Bose as he suffers from a debilitating loss of self-esteem and drives into a dungeon of despair, contemplating suicide but ministered timely balm for the soul by Xen who snips his locks and manages to read his mind just before Bose douses himself in whisky and a handful of sleeping pills. 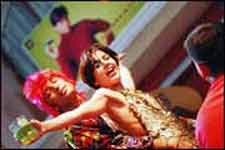 But the piece de resistance is Nikita (Koel Purie), a flippant hallucinating butterfly with a past. When Xen finds himself unable to read her thoughts (probably there were none in her head in the first place), he finds himself inexorably drawn to her. Their relationship proves to be a turning point, as Xen is led to his Nirvana.

In terms of scripting, 'Everybody....' is a far cry from hauntingly original. The main sap seems to be drawn from What Women Want (Mel Gibson, Helen Hunt). A lot of the film is lost in inane banter and repeated lines as we are hit between the eyes with hundreds of 'there you go Mr.Mittal, thank you Mr. Mittal, we'll send your bill to the office Mr.Mittal, bye bye Mr. Mittal'. Holy ravioli, who wrote these lines? Polly the parrot with the salted cracker?

A feeling of closed spaces permeates the film as we, as an audience, are kept within the confines of the Salon and Xen's room. I am not quite sure if Bose actually intended to bring in that element of claustrophobia, but boy, I sure coulda done with some Swiss settings and some Alpine air. 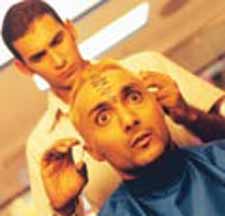 Koel Purie as Nikita is pouty and quite impressive, though a tad on the theatrical, stagey side. Rehan Engineer as Xen has ears like a jug's handle (yeah, that's about it), while Rahul Bose goes over the top with his hair (ha ha, pun intended) - really, we could have done without him (but what's the point of writing a flick if you don't get to flash your gob all over it?).

ADVERTISEMENT
This page was tagged for
watch everybody says i am fine
Everybody Says I'm Fine! english movie
Everybody Says I'm Fine! reviews
release date
Rahul Bose, Rehan Engineer
Follow @fullhyderabad
Follow fullhyd.com on
About Hyderabad
The Hyderabad Community
Improve fullhyd.com
More
Our Other Local Guides
Our other sites
© Copyright 1999-2009 LRR Technologies (Hyderabad), Pvt Ltd. All rights reserved. fullhyd, fullhyderabad, Welcome To The Neighbourhood are trademarks of LRR Technologies (Hyderabad) Pvt Ltd. The textual, graphic, audio and audiovisual material in this site is protected by copyright law. You may not copy, distribute, or use this material except as necessary for your personal, non-commercial use. Any trademarks are the properties of their respective owners. More on Hyderabad, India. Jobs in Hyderabad.