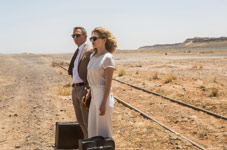 Josh / fullhyd.com
EDITOR RATING
6.5
Performances
Script
Music/Soundtrack
Visuals
7.5
5.0
7.0
9.0
Suggestions
Can watch again
Yes
Good for kids
Yes
Good for dates
Yes
Wait for OTT
No
Spectre is astonishingly similar to Mission: Impossible - Rogue Nation. Rogue Nation was about Ethan Hunt running rogue and unearthing a criminal organisation called The Syndicate and its psychopathic leader Lane, while Will Brandt tries to salvage the IMF from being dissolved by the over-enthusiastic CIA chief. Hunt recruits the services of his friends Benji and Luther, and eventually joins hands with the beautiful Ilsa Faust to unravel the Syndicate.

Spectre has Bond (Daniel Craig) going on his own mission, much to the embarrassment of MI6. Meanwhile, M (Ralph Fiennes) is trying to salvage MI6 from being dissolved by the over-enthusiastic C (Andrew Scott). Bond gets his friends at MI6, Eve Moneypenny (Naomie Harris) and Q (Ben Whishaw), to help him unearth a criminal organisation called Spectre run by a psychopathic Blofeld (Christoph Waltz). In this course, he crosses paths with the attractive Madelaine Swann (Lea Seydoux) who leads him to Spectre.

Indeed, how much more similar can they get?

We could blame the choice of humanising James Bond and giving him a backstory, but that is precisely what worked for Casino Royale and Skyfall. The problem with Spectre is more the half-hearted writing. It's surprisingly unaware of the simple maxim "show, don't tell". When Javier Bardem, in Skyfall, pulls his jaw out to show how he suffered from his cyanide intake, the repulsion you feel is enough to make you understand his villainy. On the contrary, Christoph Waltz waxes eloquent on his motivations, but it's all talk, no show.

The urge to complain is high but we must remember the Bond franchise isn't about the human, emotion-filled plots that the Craig films imbue themselves with. Bond films are about an experience which is much more visceral than even the Mission Impossible films. Which is why these movies get a wide dubbed release in Hindi, Telugu and Tamil, and that is also why even a toddy-tapper from Proddatur would quickly recognise Pierce Brosnan.

And Spectre makes good on this promise of visceral experience. The action set-pieces are spectacular. The Bond introduction scene in Mexico City amidst the celebration of the Day Of The Dead is truly befitting of the class and adventure of the leading man. The background score stands out with the motif Bond theme launching at the right times. The technical quality of the visuals (Hoyte Van Hoytema) is absolutely top-notch. There is also some of that cool tongue-in-cheek humour.

Daniel Craig is still the most unlikely but immensely likeable Bond. Brosnan or Moore would have found these emotional arcs practically unplayable but Craig pulls them off with conviction. His Bond could be shaken, but Craig isn't stirred.

Fiennes, Waltz, Bellucci, Seydoux, Scott and Whishaw are all actors on the better side of competence. The performances are generally great (Fiennes and Whishaw are swell) but Waltz may have to watch his act because we're now getting used to it. Seydoux, too, doesn't make Madelaine Swann memorable the way Eva Green did with Vesper Lynd. Three movies on, you can still tell why Bond flinches at the name of Lynd but you can't tell what sparks his romance with Swann.

Like we said, you can enjoy Spectre for the same reasons you generally enjoy Bond films - the sleek action, the amazing lead, the cheeky humour, the music, the gadgetry and the Bond girls. Oh wait, the kisses got censored (with awful jump cuts, mind you). Now that's one thing that'll ruin our toddy tapper's visceral experience.
Share. Save. Connect.
Tweet
SPECTRE SNAPSHOT 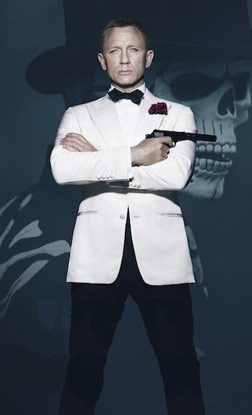 ADVERTISEMENT
This page was tagged for
Spectre english movie
Spectre reviews
release date
Daniel Craig, Lea Seydoux
theatres list
Follow @fullhyderabad
Follow fullhyd.com on
About Hyderabad
The Hyderabad Community
Improve fullhyd.com
More
Our Other Local Guides
Our other sites
© Copyright 1999-2009 LRR Technologies (Hyderabad), Pvt Ltd. All rights reserved. fullhyd, fullhyderabad, Welcome To The Neighbourhood are trademarks of LRR Technologies (Hyderabad) Pvt Ltd. The textual, graphic, audio and audiovisual material in this site is protected by copyright law. You may not copy, distribute, or use this material except as necessary for your personal, non-commercial use. Any trademarks are the properties of their respective owners. More on Hyderabad, India. Jobs in Hyderabad.