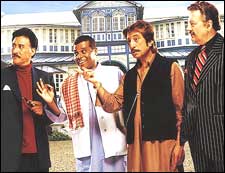 Charisma Murari / fullhyd.com
EDITOR RATING
1.0
Performances
Script
Music/Soundtrack
Visuals
NA
NA
NA
NA
Suggestions
Can watch again
NA
Good for kids
NA
Good for dates
NA
Wait for OTT
NA
Vijay Sanyal (Jas Pandher) is a wannabe dude who is really trying too hard. He boosts cars, he makes shady
property deals and he thinks he is the answer to a woman's prayer. But when he did not disappear or burst
into flames or disappear after bursting into flames, I knew that wasn’t the case.

He charms (anything’s possible when your father produces the movie) the gal who owns the property in question, gets in to a nexus with Shakti Kapoor, Prem Chopra, Danny, Ashish Vidyarthi and one more dude, and all’s hunky dory till these men start getting murdered.

The real, unsolved mystery about Shikar was the accents that the characters employed. Each person in the
the theatre looked at the other two in total bewilderment in a desperate bid to figure those out.

It has to be said, however, that we loved Jaz in the movie. He was hilarious and entirely amusing. He wasn’t limited by the fact that his character required him to be otherwise. We were most impressed by the candour that Shakti Kapoor demonstrated when he wore that thong by the poolside and assumed that since everyone knew he was a man, he had nothing to hide. Indeed. He also had nothing to show.

Did Shikar have a saving grace? Not really, it was pretty mind numbing through out. Even devoid of too many 'whistle, whistle' moments. But if we had to, if we had to pick something then we'd give some credit to the music score by Anand Raj Anand. It isn't half-bad and it stands out like the proverbial sore thumb. Okay that did not quite come out right.

Shikar had only one casualty– Jaz Pandher’s career. But then what never existed cannot perish. One profound thought and one god-awful movie later, we only know one thing for certain – if you live to tell the tale, you are alive.

ADVERTISEMENT
This page was tagged for
shikar movie Prem chopra deny sakti kapoor cast movie
Shikaar hindi movie
Shikaar reviews
release date
Jaz Pandher
Follow @fullhyderabad
Follow fullhyd.com on
About Hyderabad
The Hyderabad Community
Improve fullhyd.com
More
Our Other Local Guides
Our other sites
© Copyright 1999-2009 LRR Technologies (Hyderabad), Pvt Ltd. All rights reserved. fullhyd, fullhyderabad, Welcome To The Neighbourhood are trademarks of LRR Technologies (Hyderabad) Pvt Ltd. The textual, graphic, audio and audiovisual material in this site is protected by copyright law. You may not copy, distribute, or use this material except as necessary for your personal, non-commercial use. Any trademarks are the properties of their respective owners. More on Hyderabad, India. Jobs in Hyderabad.