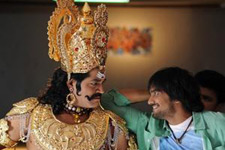 Kritika Deval / fullhyd.com
EDITOR RATING
3.0
Performances
Script
Music/Soundtrack
Visuals
5.0
3.0
2.0
5.0
Suggestions
Can watch again
No
Good for kids
No
Good for dates
No
Wait to rent it
No
Whoever said that nature is stranger than anything the human imagination can cough up has never taken a peek into the brain of a south Indian filmmaker. With this pithy observation, we commence on the telling of a tale so ridiculously unusual that it is more ridiculous than unusual.

The miracle of miracles occurs. Yamadharmaraju (Srihari) - that arbiter of life and death, that deliverer of destiny, that botox-ed man atop a CG-generated bull with an identity crisis that is out of this world (the bull, i.e.) - has found a devotee in Balu (Sairam Shankar), a 24-year-old whose incessant chanting of "Yamaho Yama" will have you wondering why that God won't show up to do his business. As you'll find out, Balu is fated to die anyway, and is allowed to have his fun, because either his fate, or his suicidal tendencies, are bound to wipe him off the face of the earth. Or so we'd like to hope.

So, yeah, Balu's granny finds out that he's fated to die, and decides that the best way to cheat death would be to make friends with it. With this intention, she grooms Balu to be a devotee of Yamadharmaraju. This really cheers up that sombre God's wife, because the other Goddesses made fun of the fact that He didn't have anyone to pour milk and bananas on He. Apparently, celestial kitty parties aren't any different than those meant for mortals.

The granny also decides to ship Balu off to America, along with a "producer", because you always listen to crazy, old, strangely monochromatic men. So, off goes our hero to the US of A with "producer" Ashwini Raj, thinking that he's going to become a hero. As he finds out while they're waiting for their ride at the airport (which is really GVK One), Raj doesn't have two char-annas to rub together.

As they wallow in their insolvency at the beach, their luck changes when Balu rescues Sanjjanaa Gilrani (who plays a mysteriously over-solvent massage therapist who attempts suicide in a sequined bikini because she lost her dogs), and then goes on to take them in so she gets to stalk Balu full time. A particularly disturbing attempt at the latter was the "song" Touch Me, Balu.

2. He jumps in front of cars for fun. (He says he does it to save people, but we know better right?)

3. He sleeps like a baby with fifty swords poised above him, ready to turn him into the thinnest of slivers ( though not as thin as graphene, which we hear is the thinnest material in existence).

4. He falls in love with a woman whose fianc?Â© is a guy who passes time by chopping off heads.

5. He falls in love with a woman whose fianc?Â© is a guy who passes time by chopping off heads.

Back to Yamadharmaraju's wife. When Balu seems like he's veering off from the path of righteousness, the divine wifey is miffed, and sends her divine hubby, Chitragupta (M S Narayana) in tow, on a vacation to America, where our hero is going about being appropriately repugnant in a foreign land appropriately filled with sluts, perverted black men and Chinese women with a "Chinese" accent that is never heard outside of Telugu cinema.

Once in the US of A, Yamadharmaraju and Chitragupta join Balu and his friend in all their "noble" endeavours, while marveling at the "devout" nature of the boy. All four men, mortal and immortal, go on to become the best of buddies. In the meantime, Balu falls for Swapna (Parvati Melton), who is engaged to the aforementioned kindly soul with a chop-happy sickle, a true Rayalaseema bidda of the name Jinda. His parents apparently had a rather twisted sense of humour.

Soon, though, it becomes apparent that Yamadharmaraju's only devotee is fated to come to him for all of eternity, all because HE FALLS IN LOVE WITH A WOMAN WHOSE FIANC?â€° IS A GUY WHO PASSES TIME BY CHOPPING OFF HEADS, and it is too late for the former to do anything, owing to his allegiance to his dharmam.

It is here that the story gets too "imaginative" for our puny intellects to wrap around, so let's talk about other aspects of the movie instead.

The performances range from borderline execrable in the case of Sairam Shankar, Sanjjanaa (obviously, all those extra letters are weighing down her intellect) and, surprisingly, Srihari; to mildly amusing in the case of, surprisingly, Parvati Melton, M S Narayana, Tagubothu Ramesh in the short time that he spent on the screen, and, unintentionally, the villain, i.e., the guy playing Parvati Melton's fianc?Â©.

What is funny, albeit unintentionally so, is the screenplay and the "special effects". For example, one of the first scenes of the movie is Srihari turning into a tree for no particular reason other than because he can.

As far as the music is concerned, it might interest you if you have a penchant for the brain-dead, the cheesy, the sleazy, the... (you get the point).

Bottomline: Watch Yamaho Yama In America if you want to see Jr. NTR's Yamadonga transplanted to a nation that all of Andhra Pradesh loves and loves to lampoon, and if you like CG-generated animals with identity issues.
Share. Save. Connect.
Tweet
YAMAHO YAMA IN AMERICA SNAPSHOT 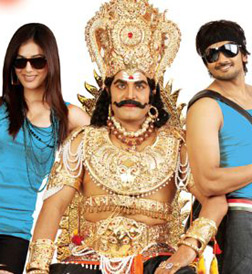 ADVERTISEMENT
This page was tagged for
Yamaho Yama In America telugu movie
Yamaho Yama In America reviews
release date
Sai Ram Shankar, Parvathi Melton
theatres list
Follow @fullhyderabad
Follow fullhyd.com on
About Hyderabad
The Hyderabad Community
Improve fullhyd.com
More
Our Other Local Guides
Our other sites
© Copyright 1999-2009 LRR Technologies (Hyderabad), Pvt Ltd. All rights reserved. fullhyd, fullhyderabad, Welcome To The Neighbourhood are trademarks of LRR Technologies (Hyderabad) Pvt Ltd. The textual, graphic, audio and audiovisual material in this site is protected by copyright law. You may not copy, distribute, or use this material except as necessary for your personal, non-commercial use. Any trademarks are the properties of their respective owners. More on Hyderabad, India. Jobs in Hyderabad.