Me Myself and Irene Review 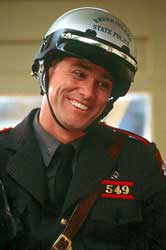 Feroz Hassan / fullhyd.com
EDITOR RATING
7.5
Performances
Script
Music/Soundtrack
Visuals
NA
NA
NA
NA
Suggestions
Can watch again
NA
Good for kids
NA
Good for dates
NA
Wait for OTT
NA
Whatever you think about lewd comedy, its here to stay, for better or for worse. Watching Me, Myself and Irene, one feels that it isn't really getting any better or worse. The Farrelly brothers' sense of humor is as nasty as ever - if anything, it's become more cruel. But, what the heck, we all just love to loosen up and let our politically correct 'part' go on a leave every now and then, don't we? Cruelty to animals, date rape, a guy threatening kids - we are expected to laugh at these, and what's more, we do. If you don't, then watching this movie will give you the feeling of having committed the seven deadly sins in one go.

Anyway, the protagonist, Charlie (Carrey) decides to do just that. But, as the shrink's diagnosis says, it is involuntary - the diagnosis goes like 'advanced, schizophrenic, delusionary disorder and involuntary narcissistic rage'. Whatever that is, it sure does make Charlie more interesting than he ever dreamed of. After all, a man who lost his wife to the limo driver who drove them from their wedding, and has three kids to take care of after his wife dumps him for the 'vertically-challenged' driver, wouldn't have much going for him. To top it all, the kids are the driver's. Charlie loves them, all the same.

All the years of taking it on his chin 'splits' the man from inside, so much so that his suppressed self - Hank - decides to take it over from here, and hands it back when the going gets tough. Sick, isn't it? Wait till you watch the movie. Frankly, not everything can be mentioned here. The rest of the story is pretty simple, as Charlie and Hank fall for the same girl, Irene (Renee Zellweger). Irene is wanted by the police for the information she can provide about a crook. Through a misunderstanding, the 'three' of them are on the run from the rest of the parties involved.

The presence of Jim makes sure that there is a physical aspect to the comedy that goes beyond the darts of ...Mary. Forgive me for being so cryptic, but can't go beyond that. One can't imagine that the brothers could have pulled this off without him. Renee Zellweger is as cute as she can be, and is the only person who evokes some positive feelings even in revolting situations.

It is the kind of comedy that one part of you will enjoy, and the other part will hate that part of you for it. If you find that intriguing enough, go ahead!
Share. Save. Connect.
Tweet
ME MYSELF AND IRENE SNAPSHOT

ADVERTISEMENT
This page was tagged for
english full movie me "my self" and irene
Me Myself and Irene english movie
Me Myself and Irene reviews
release date
Jim Carrey, Renee Zellweger
Follow @fullhyderabad
Follow fullhyd.com on
About Hyderabad
The Hyderabad Community
Improve fullhyd.com
More
Our Other Local Guides
Our other sites
© Copyright 1999-2009 LRR Technologies (Hyderabad), Pvt Ltd. All rights reserved. fullhyd, fullhyderabad, Welcome To The Neighbourhood are trademarks of LRR Technologies (Hyderabad) Pvt Ltd. The textual, graphic, audio and audiovisual material in this site is protected by copyright law. You may not copy, distribute, or use this material except as necessary for your personal, non-commercial use. Any trademarks are the properties of their respective owners. More on Hyderabad, India. Jobs in Hyderabad.