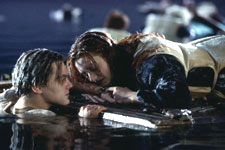 Chinmayi Sirsi / fullhyd.com
EDITOR RATING
8.0
Performances
Script
Music/Soundtrack
Visuals
NA
NA
NA
NA
Suggestions
Can watch again
NA
Good for kids
NA
Good for dates
NA
Wait to rent it
NA
It was the ship of dreams - one of man's greatest creations, an artist's delight, an engineering marvel, unsinkable. It sank into the Atlantic on the 14th of April 1912. And ever since, the disaster has fascinated earthlings - they've sent expeditions down to explore the wreck, they've written books, they've made documentaries, they've made movies, and they've made money out of all this.

But public interest was never as high as it was in 1997-98 when James Cameron decided to make a movie his way on the most famous ever ship. The world waited with bated breadth as he poured his heart, soul and millions into telling the story as he saw it. And few filmmakers have been so overwhelmingly rewarded for their efforts. Titanic displaced Jurassic Park to be the new all-time-high grosser, and swept the Oscars.

It is the year 1996, and Ross Lowett and his team of treasure-seekers are searching the ruins of the Titanic for the "heart of the ocean", a rare and valuable diamond. The search leads them to Rose, a 101-year old survivor of the disaster. The story of the Titanic now becomes the story of Rose (Kate Winslet), a beautiful woman trapped in high society, and Jack (Leo DiCaprio), an artist who wins his ticket to the Titanic at a poker game.

The first half of the movie is pure delight. The plot is built masterfully, and treats the audience with some breath-taking visuals of the interiors of the ship - dining halls with huge chandeliers, long staircases and lovely wine glasses. The beauty and the splendor are deliberately accentuated - Cameron uses the audience's knowledge of the disaster as a powerful tool to play skillfully on their feelings. The certainty of doom hangs, though lightly, in the air.

Then Titanic hits the iceberg, and the danger is finally made real. As panic spreads, Cameron gives us stark glimpses of human behavior. Dignity and sacrifice, bravery and cowardice, determination and anger, all come to the surface as 2000-odd people face the threat of death. Moral and ethical dilemmas lead to murder and suicide. Class-discrimination persists till the very end, and even as lifeboats are scarce, they sail half-empty.

There are times in the movie that make you wonder why you are watching so much disaster and tragedy. But most of the times you just go where the movie takes you, without doing much of wondering. There are no messages in the movie (unless you count the "My Heart Will Go On"). Cameron set out to tell a story and told it well.

Too much publicity spoiled the movie for a lot of people. And many complained of claustrophobia during the second half. But the only reason that you wouldn't see this winner of 11 Academy Awards would be that you've already seen it, and perhaps a few times. But if you happen to be one of the rare few who didn't catch Titanic when it showed and showed and showed in Hyderabad, then maybe now is a good time. It is certainly worth a watch... or two... or...
Share. Save. Connect.
Tweet
TITANIC SNAPSHOT 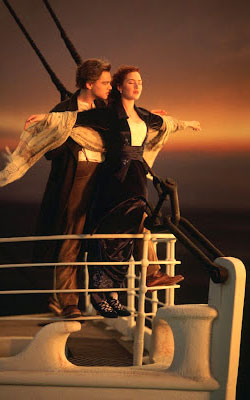 ADVERTISEMENT
This page was tagged for
titanic movie review in english
Titanic english movie
Titanic reviews
release date
Leonardo Di Caprio, Kate Winslet
Follow @fullhyderabad
Follow fullhyd.com on
About Hyderabad
The Hyderabad Community
Improve fullhyd.com
More
Our Other Local Guides
Our other sites
© Copyright 1999-2009 LRR Technologies (Hyderabad), Pvt Ltd. All rights reserved. fullhyd, fullhyderabad, Welcome To The Neighbourhood are trademarks of LRR Technologies (Hyderabad) Pvt Ltd. The textual, graphic, audio and audiovisual material in this site is protected by copyright law. You may not copy, distribute, or use this material except as necessary for your personal, non-commercial use. Any trademarks are the properties of their respective owners. More on Hyderabad, India. Jobs in Hyderabad.