The Ides Of March Review 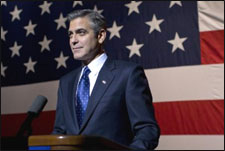 Samrat Sharma / fullhyd.com
EDITOR RATING
7.5
Performances
Script
Music/Soundtrack
Visuals
10.0
7.0
7.0
7.0
Suggestions
Can watch again
NA
Good for kids
NA
Good for dates
NA
Wait for OTT
NA
Indians beware - this tale of politicians and their various flunkies being capable of anything and everything to get elected is seriously going to seem familiar to the point of losing its shock value. I mean, this shouldn't be new to anyone, right?

At the same time, George Clooney has crafted a solidly-entertaining film about politics in the United States, that is boosted by the all-round amazing start cast that fills it up. Seriously, this is a killer cast, one that any director would be lucky to have, and Clooney knows the importance of it - the time and beats afforded to all of them are judicious.

Mike Morris (Clooney) is seeking Democratic nomination (for those not in the know, Office hopefuls in the States have to first run for being THE candidate from their party, and then run again for Office - imagine if party tickets had to be earned by fierce campaigning and polling), who has liberal ideals, which he finds can be compromised in the face of challenges.

The start of the show is Gosling, playing Stephen Myers, an idealistic press secretary who finds he still has scruples. A couple of wrong decisions from Stephen are threatening to unravel the whole campaign, when he entertains being taken away by a shrewd campaign manager (Giamatti) of Morris' rival, and becomes involved with a young intern (Rachel-Wood), who may be very bad news. Added to the mix is a reporter who will blackmail anyone to get her scoop (Tomei), and in the circumference is the governor of a state who wants to curry favour and parlay it into a job in the Cabinet.

The script is not as biting as something like this needs to be to keep track of all the characters and give them quick memorable moments. It is also problematic that the topicality and burning desire to lambast US politicians of the current day isn't as strong.

The plot gets predictable soon, and only the actors, with the serviceable, but not quite as stellar, writing, can save it. And save it they do - this is one of the finest examples of why an ensemble film can be the best of things in certain situations. Everyone gets their moment, though this is Ryan Gosling's turn to be star, and his stamp is all throughout the film. Good thing then, that the man can act wonderfully.

It is a tight film, too - nothing seems out of place or extraneous. Every single beat, every dialogue, is measured to perfection, and the tension and drama are completely intact throughout. The final beats consist of some tense stand-offs and it goes to show the movie's strength and conviction in its goal - it never cheapens its aesthetic with anything less than absolutely crackerjack drama.

This is a politically-charged time for the US, and the film seems to be oblivious of it - the commentary is far less topical than it could be. Yet, this adds to the film's timelessness - the messages are universal and well-thought through. If only they were better written, this could have been a classic. As it stands, it is simply a very good film.
Share. Save. Connect.
Tweet
THE IDES OF MARCH SNAPSHOT

ADVERTISEMENT
This page was tagged for
The Ides Of March english movie
The Ides Of March reviews
release date
Ryan Gosling, George Clooney
theatres list
Follow @fullhyderabad
Follow fullhyd.com on
About Hyderabad
The Hyderabad Community
Improve fullhyd.com
More
Our Other Local Guides
Our other sites
© Copyright 1999-2009 LRR Technologies (Hyderabad), Pvt Ltd. All rights reserved. fullhyd, fullhyderabad, Welcome To The Neighbourhood are trademarks of LRR Technologies (Hyderabad) Pvt Ltd. The textual, graphic, audio and audiovisual material in this site is protected by copyright law. You may not copy, distribute, or use this material except as necessary for your personal, non-commercial use. Any trademarks are the properties of their respective owners. More on Hyderabad, India. Jobs in Hyderabad.