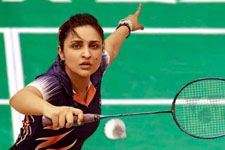 Anil Bandhakavi / fullhyd.com
EDITOR RATING
7.0
Performances
Script
Music/Soundtrack
Visuals
7.0
7.0
6.0
7.0
Suggestions
Can watch again
No
Good for kids
Yes
Good for dates
Yes
Wait to rent it
Yes
Director Amole Gupte attempts to give us a taste of the painstaking life that an athlete endures in his biopic on Saina Nehwal, India's only female badminton player to reach the world no. 1 spot. The film is a fictional representation of the events in Saina's life, leading up to her achievement of the international women's singles no. 1 rank.

Saina (Parineeti Chopra), the daughter of Usha Rani Nehwal (Meghna Malik) and Harvir Singh Nehwal (Subhrajyoti Barat), starts her badminton journey as a child at a training camp at Lal Bahadur Stadium in Hyderabad. Usha Rani, who once played at the district level in Haryana, is determined to see her daughter grow in the sport, and is convinced that she can reach the highest heights. In her stubborn moments, Usha can even forget that losing is a part of the game. Harvir Singh is the most compassionate of fathers who complements his wife's efforts with utmost patience. Saina, in her narration, aptly compares the forces exerted by her mother and father to fire and water, respectively.

Saina does justice to her parents' hard work from day one. She is a little prodigy on the court, and this is instantly recognised by the coaching staff. A time comes when Saina's initial victories naturally lead her to Rajan (Manav Kaul), who runs an academy where he expects no confusion about its central purpose - to breed champions. (Rajan is the fictional representation of Pullela Gopichand, who to this day is Saina Nehwal's coach.)

Under Rajan, Saina first experiences the need to make sacrifices to reach the higher echelons of the badminton world. But nothing can stop her drive as she continues to shine bright, and enters the senior level on the world stage at just 16 years of age. It is at the same time that a romance starts brewing between Saina and Parupalli Kashyap (Eashan Naqvi).

Continued success in the sport starts to bring in endorsement deals and money that become new distractions to deal with, causing tension with Rajan who's always been clear that the sport should be the central focus. Rajan could not have chosen better words when he warns Saina that the dangers in the journey of sport are not introduced by dreams that are too big, but from the tendency to settle for victories that are too small. Amidst these challenges, Saina continues her battle to reach the no. 1 spot.

The film beautifully documents the nature of Saina's trek. You are given a taste of the expectations that weigh so heavily on the shoulders of a youngster who lives a life so different from that of the rest. The ominous feel of each loss, and its impact on the psychology of the player who's trying to climb upwards, is something that we find no need to consider when we are simply there to be entertained by their feats. You get a good taste of this bittersweet potion.

Parineeti Chopra brings out all that you'd expect in Saina's personality. Her pinpoint depiction is kept on its toes by Meghna Malik and Manav Kaul who master the art of relatability in playing their characters. Something has to be said about the tactfully written dialogue by Amitosh Nagpal, and the professional cinematography by Piyush Shah that has you living inside the story during the film's runtime.

The scenes that cover Saina in action on the court are set up to look like real matches, preventing any distractions from the story. You wonder whether the actors play the sport on some level as their moves look quite genuine, and the attention to this detail must be complimented.

In the interest of being objective, since the story is strung together by Saina's victories on the way to the top, there is definitely room to trim some fat in the final cut. As you approach the end, you get the drill, and a brief sense of monotony does kick in the last third of the film.

Overall, it's two thumbs up for this entertaining biopic, that's a great watch for all ages. If you're a sports lover, the story presents a good mix of both action on the court and feelings off it. Entertainment being the goal, it's as fictional as it is real. A ticket for one ride on Saina's emotional rollercoaster is totally worth it.
Share. Save. Connect.
Tweet
SAINA SNAPSHOT 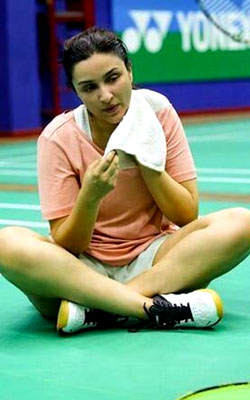 ADVERTISEMENT
This page was tagged for
Saina hindi movie
Saina reviews
release date
Parineeti Chopra, Manav Kaul
theatres list
Follow @fullhyderabad
Follow fullhyd.com on
About Hyderabad
The Hyderabad Community
Improve fullhyd.com
More
Our Other Local Guides
Our other sites
© Copyright 1999-2009 LRR Technologies (Hyderabad), Pvt Ltd. All rights reserved. fullhyd, fullhyderabad, Welcome To The Neighbourhood are trademarks of LRR Technologies (Hyderabad) Pvt Ltd. The textual, graphic, audio and audiovisual material in this site is protected by copyright law. You may not copy, distribute, or use this material except as necessary for your personal, non-commercial use. Any trademarks are the properties of their respective owners. More on Hyderabad, India. Jobs in Hyderabad.