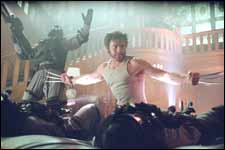 Mutant freedom now! It's good mutant plus bad mutant against a threat to all mutants! Nope, no Calculus here, just plain ol' survival as all the evolutionary gimmicks join forces to combat what might well be the end of Marvel Comics' most loved weirdoes!

X2 is a fantastic continuation of the comic book and remains, as far as I can make out, true to the original characters. The plot takes off with a mutant Nightcrawler, who looks like hell spawn complete with lashing tail, making an attempt at bumping off the President of the United States. Nothing wrong with that, except that it fails! 'Mutant freedom now' is the message tagged on the edge of a knife... yeah, might help! Next time around, aim straight pal! 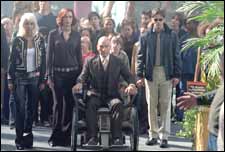 News of the botched attempt spreads, and Professor Xavier's School For The Gifted comes under scrutiny. But this ain't no ordinary school - this is one school where you've shelled out good moolah to gawk at its students! This is where mutants come in to learn and discover their mutant powers. Well, now that they have General Stryker's undivided attention, the mutants have to team up and spring into action.

And X2 has the dose of the usual suspects - the incredibly sexy Hugh Jackman (wolverine or no wolverine, this man is an ANIMAL), the telepath Jean Grey (Famke Janssen), Storm (Halle Berry, with her special lenses and weather controlling ability), blast-firing Cyclops and, of course, the metal-manipulating Magneto.

X2 also pitches in two new characters - Rogue (Piano's Anna Paquin), whose touch is so lethal she can literally suck the life out of you, and Iceman (Shawn Ashmore). Well, so much for clichés rearing their ugly head, here's one right here... a hormone-induced dalliance between these two mutants. 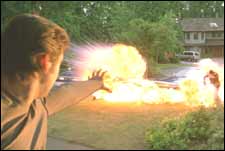 But as the film progresses, it becomes increasingly clear that X2 doesn't quite act as a sequel... it carves out a special separate identity for itself. Which works fine for most parts because we're so enamored by the whole slambang effects and the cool action sequences. It's only much later you realize that you're bogged down by the emphasis on each character, which gets a tad tedious. Let it rest, buddy, and bring on the goodies.

Which is my favorite part really - X2 has superb action sequences, each one carefully more complicated than the previous... but was it just me or was the lighting a little funny? But looking past some grainy images and weird illumination, the film scores on the action front. Especially if you're a sucker for gee-whiz action! Marvel lovers rejoice! Though the movie may be low on practical value... really now, just what is the point of being able to turn stuff to ice? Unless you live in Delhi and are throwing a party! 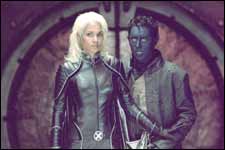 Anyway, X2 is certainly not your cuppa if you're looking for fodder for 'em grey cells. The characters seem to be more comfortable with themselves in this sequel.... Halle Berry is right under Storm's skin and Alan Cummin is the absolute darling of this flick. Jackman of course, like I said, is... wrrrfffw! The pace of the flick is just about fine, except for the last half, where it trips over itself a bit.

ADVERTISEMENT
This page was tagged for
X2 filmtalugu
x2 x-men united full movie in english
X2: X-Men United (English) english movie
X2: X-Men United (English) reviews
release date
Follow @fullhyderabad
Follow fullhyd.com on
About Hyderabad
The Hyderabad Community
Improve fullhyd.com
More
Our Other Local Guides
Our other sites
© Copyright 1999-2009 LRR Technologies (Hyderabad), Pvt Ltd. All rights reserved. fullhyd, fullhyderabad, Welcome To The Neighbourhood are trademarks of LRR Technologies (Hyderabad) Pvt Ltd. The textual, graphic, audio and audiovisual material in this site is protected by copyright law. You may not copy, distribute, or use this material except as necessary for your personal, non-commercial use. Any trademarks are the properties of their respective owners. More on Hyderabad, India. Jobs in Hyderabad.