Phone Booth is one of those films that do not fast forward time - i. e., film length of two hours means that the story spans two hours. Also, thankfully, it does not span eight hours like that longest commercial film ever made, 'Sleep', and all that showed was a man sleeping. Trust the Japs to come up with something like that! So much for the trivia.

What Joel Schumacher comes up with, though cannot be termed great, is not what you would call mediocre run-of-the-mill stuff either. Steward Shepherd (Colin Farrel), Stu as he calls himself, is your average everyday New York publicist, who has a wife Kelly and a girlfriend Pam. Each day he goes about his business the same way doing the usual things - lying, cheating, deceiving etc. 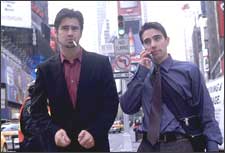 So one day after he makes that appointed call to Pam from the same phone booth that he has been using for days, the phone rings. And he finds himself in the proverbial wrong place at the wrong time (as if there is a right time to be in a wrong place).

The man who calls Stu is holding a telescoping gum aimed at him. If Stu hangs up, he goes from is to was. At this point, I let out a sigh of relief. What are the chances of that happening to me on the streets of Hyderabad? One to million? I mean for a pay phone to ring it has to be working, right?

Anyway, then begins Stu's ordeal. The hookers across the street want to use that phone. Their pimp comes in to make him leave and our bad guy shoots him. Then we have that familiar sight of squad cars screeching to a halt to nab the suspect - in this case, Stu. BTW, I never understand this. Either they have too many squad cars in the US or the cops are damn inefficient to require tens of squad teams to nab one person.

Out comes Captain Edward Raymonds, and he starts negotiating for Stu's surrender, not aware of the real situation. To enhance the dramatic effect, Kelly and Pam also show up. The rest of the film is basically about how Stu uses all the limited resources that he has at his disposal to get out of the situation. However, as has been the tradition of all Hollywood films to leave that opening for a sequel, the real baddie does not get caught. 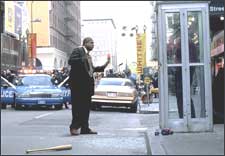 Like I said, the film is not great. Still, if you are looking for some neatly done sequences with some nifty camera work, then you need not look much farther than this. It does not hit a real high anywhere, but remains at the same level more or less throughout, and that level is not low. When you leave the theater you are bound to take those blank calls more seriously.

ADVERTISEMENT
This page was tagged for
Phone Booth english movie
Phone Booth reviews
release date
Colin Farrell, Forest Whitaker
theatres list
Follow @fullhyderabad
Follow fullhyd.com on
About Hyderabad
The Hyderabad Community
Improve fullhyd.com
More
Our Other Local Guides
Our other sites
© Copyright 1999-2009 LRR Technologies (Hyderabad), Pvt Ltd. All rights reserved. fullhyd, fullhyderabad, Welcome To The Neighbourhood are trademarks of LRR Technologies (Hyderabad) Pvt Ltd. The textual, graphic, audio and audiovisual material in this site is protected by copyright law. You may not copy, distribute, or use this material except as necessary for your personal, non-commercial use. Any trademarks are the properties of their respective owners. More on Hyderabad, India. Jobs in Hyderabad.