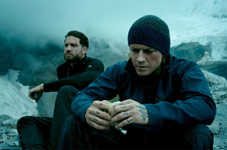 This visual excellence is all you'll find in Point Break. The plot is nano-sized. An FBI agent Utah (Luke Bracey) finds that a couple of expensive heists are the doings of three extreme athletes (headed by Edgar Ramirez) who are trying to accomplish a set of extreme ordeals called the Ozaki Eight. Utah, having a background of extreme biking, is sent to pursue these criminals, and he does this by taking part in these ordeals along with them.

Having established this ruse for lingering on sprawling landscapes and CGI enhanced adventures, the film spends most of its time sucking its cinematographer's talent dry. Surfing on colossal waves, biking on mountain ridges that are as narrow as they are tall, paragliding through deep valleys, snowboarding on surreal cliffs... these are what you see, and they are all shot with extreme care. Also there's some talk on nirvana and giving back to the earth, but these conversations could well be the proceedings of The Local Conference On World Peace And Teenage Angst.

Sure, we don't walk into action films expecting life-altering insights and soul-stirring metaphysics, so it must be allright if the film has no semblance of a plot or is as shallow as a beginners' swimming pool. The reason we watch these films is the superficial entertainment they are expected to provide us. These are the kinds of films which are an aside to the popcorn instead of the other way round.

Only, Point Break does not entertain. If the director's idea of engaging a viewer is unending stretches of adventure sports, the guy is better off sending an application to Discovery or AXN or the like. Even the most shamelessly campy thrillers need drama in their action sequences. Some human element like a danger that is averted or a lover gasping at a narrow escape or friend hooting and cheering a win - there's got to be something. Perpetual daredevilry without invoking some basic human emotions makes for a gigantic breathtaking bore.

So if there is a four-minute-long scene (it could well have been four hours long) involving surfing on a huge wave and all you see are waves and tiny human figures on the waves, you won't find yourself interested after roughly seventeen seconds. Not a single human connection clicks in Point Break. Why are they friends? Why do this guy and that girl hit it off? Why don't these guys just hit a huge boulder and save us all the trouble of having to sit through this for another hour and a half?

The score is decidedly off the Hans Zimmer block, and it gets tiring after a while. The editor did a terrible job by not making it a YouTube highlights video of a modest duration of 6 minutes and 12 seconds. The acting is as underworked as the script the actors were given (except Ray Winstone and Delroy Lindo who probably thought they were in a different movie).

The film and its title push us to use a superb reference (BBC's Black Adder) for a superbly dull film. We have this to say - Point Break is like a broken pencil. It's pointless.
Share. Save. Connect.
Tweet
POINT BREAK (3D) SNAPSHOT 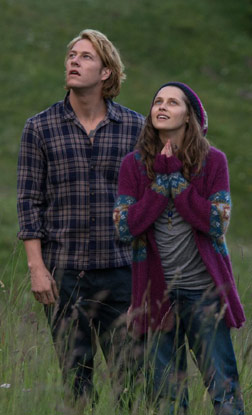 ADVERTISEMENT
This page was tagged for
Point Break (3D) english movie
Point Break (3D) reviews
release date
Édgar Ramírez, Luke Bracey
theatres list
Follow @fullhyderabad
Follow fullhyd.com on
About Hyderabad
The Hyderabad Community
Improve fullhyd.com
More
Our Other Local Guides
Our other sites
© Copyright 1999-2009 LRR Technologies (Hyderabad), Pvt Ltd. All rights reserved. fullhyd, fullhyderabad, Welcome To The Neighbourhood are trademarks of LRR Technologies (Hyderabad) Pvt Ltd. The textual, graphic, audio and audiovisual material in this site is protected by copyright law. You may not copy, distribute, or use this material except as necessary for your personal, non-commercial use. Any trademarks are the properties of their respective owners. More on Hyderabad, India. Jobs in Hyderabad.