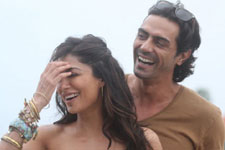 Nupur Barua / fullhyd.com
EDITOR RATING
4.0
Performances
Script
Music/Soundtrack
Visuals
6.0
4.0
6.0
5.0
Suggestions
Can watch again
No
Good for kids
No
Good for dates
No
Wait to rent it
No
Arjun Rampal and Chitrangada Singh did not really know each other before they shot for Inkaar. So director Sudhir Mishra made them hang out together, just to build on their chemistry. They seem to have got along well, and it shows in the movie - which is fortunate, because there is nothing much that one can say of their acting (and as lovers, at that).

So Inkaar opens with a pitch that the National Creative Director of KK Doyle Advertising, Maya Luthra (Chitrangada Singh), makes to a company. Rahul Verma (Arjun Rampal), the CEO of the same ad agency, is also there, and the pitch goes well. They go back to the office. All seems hunky-dory between them.

It is Day 1. A certain Mrs. Kamdar (Deepti Naval) is in the KK Doyle office. She is a social worker, who is now going to head a committee to investigate the sexual harassment complaint that Maya has made. The harasser is none other than Rahul himself. Shock!

As the committee (with two other ladies and two men from the ad agency itself) questions both parties individually (over a period of three days), it transpires that Maya was an aspiring, bright girl, whom Rahul took under his wing and "made". He taught her everything she knows, and her success is entirely his doing. Somewhere down the line, they fell in love, broke up, she pushed off to New York, and came back as the National Creative Director of the company, and with a boyfriend Tarun (Sandeep Sanchdev).

So is it true, then, that Rahul made her life living hell? Or is he a stepping stone for her to further her career? The committee has divided opinions on this, and Mrs. Kamdar is flummoxed - and so is the audience, after a point.

The story begins well, and is compelling enough till the intermission. The plot keeps you guessing for a while. Towards half-time, however, the intention of the script (one presumes it tries to be unbiased in the portrayals of the two characters) is lost, and Maya comes across as a scheming vamp. Also, the extent of harm done to her is somewhat trivialised.

The end, when it comes, after hours of deliberation and confusion, is unconventional, yes, but extremely ludicrous. You feel you have been taken for a ride all along.

Rahul has a father (Kanwaljeet Singh) who has no part to play, really. He is immaterial to the story, and precious time is lost on him. Maya's mother (Rehana Sultan) is a more relevant character, but is not seen for more than two minutes.

The story, brought to light through flashbacks, songs and statements from other people, does not follow a set pattern, and gets a little jarring and chaotic at times.

Disappointingly, the ad campaigns that are shown in the movie to prove how brilliant the agency is, and how cool the creatives are, are really bad. The CEO is there in every pitch, so why is there a National Creative Head? Sudhir Mishra should have maybe spent some time in researching how an ad agency works, and what kind of ads are considered award winners in this century.

Chitrangada Singh serves just one purpose - she makes Arjun Rampal look like a seasoned actor. She hams and glares most of the time, but manages to look very hot, what with the smoky eyes and nose-ring. And to think that she was once touted as the "next Smita Patil". Sacrilegious!

Arjun Rampal is getting there, as an actor, with or without Chitrangada Singh. He is consistent, and manages to evoke empathy (which is much more than what his co-star does). He does look a little old, but he still looks good.

The other actors are the saving grace, actually. Vipin Sharma, a confused Deepti Naval, Shivani Tanskale, Mohan Kapoor - all of them play their parts perfectly. So does the actor who plays Kavita. She is the most memorable character of all, although it is not quite clear what her designation or role is.

Nothing can equal the soundtrack of Hazaaron Khwaishein Aisi, but Shantanu Moitra does a decent job. Papon's bass voice will wake you up just when you lose interest. The placement of the songs is a little erratic, though.

The overall look of the film is normal, and quite appropriate, but the sense of period (the story goes back seven years) is not quite there. Chitrangada Singh looks hot in her costumes, but Arjun Rampal has a few shabby clothes (at least for a CEO). Cinematography veers towards the Ram Gopal Verma style (shaky camera movements, odd angles, skewed frames), but is still cohesive enough to be comprehensive. Locations are random, and not thought out completely.

Watch Inkaar only if you are a Sudhir Mishra fan, or if you are curious to know if the story is similar to Disclosure (not really), but even the most die-hard fan will admit that the director is not the same person who gave us Hazaaraon Khwaishein Aisi and Yeh Woh Manzil Toh Nahin. Inkaar is definitely not your best option this weekend.
Share. Save. Connect.
Tweet
INKAAR SNAPSHOT 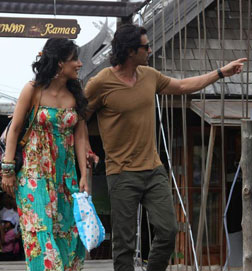 ADVERTISEMENT
This page was tagged for
Inkaar hindi movie
Inkaar reviews
release date
Arjun Rampal, Chitrangada Singh
theatres list
Follow @fullhyderabad
Follow fullhyd.com on
About Hyderabad
The Hyderabad Community
Improve fullhyd.com
More
Our Other Local Guides
Our other sites
© Copyright 1999-2009 LRR Technologies (Hyderabad), Pvt Ltd. All rights reserved. fullhyd, fullhyderabad, Welcome To The Neighbourhood are trademarks of LRR Technologies (Hyderabad) Pvt Ltd. The textual, graphic, audio and audiovisual material in this site is protected by copyright law. You may not copy, distribute, or use this material except as necessary for your personal, non-commercial use. Any trademarks are the properties of their respective owners. More on Hyderabad, India. Jobs in Hyderabad.