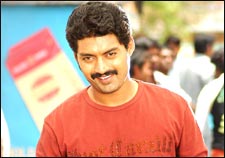 EDITOR RATING
3.0
Performances
Script
Music/Soundtrack
Visuals
6.5
3.0
5.0
6.0
Suggestions
Can watch again
No
Good for kids
No
Good for dates
No
Wait to rent it
No
Hi. I'm Hari. Or maybe I'm Ram. To figure out in this movie, you need an IQ of 200. The other way is to watch this movie that many times. The only problem with the latter approach is that watching this movie once feels like you've watched it 200 times anyway - like Rajini would say, "Ee cinema okka sari choosthe rendu vandala saarlu choosinattu." The best way to avoid that is to come with 200 of your friends, so that each feels like he has seen it once. If you're wondering about the logic there, oh, we haven't even gotten started yet.

Anyway, I and my identical twin Ram have a small difference - he has some congential problem in his medulla oblongata (an important part of your brain that works if you don't get it removed) that makes him react like a wild lion whenever someone calls him dumb.

It's not hard to understand that emotion, as you'll discover when you tell people you've watched this movie and they give you their frank opinion. The only problem, however, is that Ram also kills such people, which most people would agree is a harsh reaction - if I killed all people who found me dumb, I'd have no friends left.

Once when we are both kids, Ram tries to kill me since he hates being told he's dumber than me, and I have a lucky escape. Our father (Chandramohan), however, is livid - no father likes the son with the functioning medulla oblongata killed by the one without it, especially a father who's already had a vasectomy. To help me escape his wrath, my mother runs away with me. So Ram and I are both brought up in different places, with me growing up to become an IPS officer, and he never really growing up.

Once there are a couple of gory deaths, and my investigation leads me to the film's most crucial conclusion - no, not that this movie's writers spent lesser time to type the script than it takes to save it in MS Word, but that my own brother committed these murders. I cannot let this fact out since there will be shoot-at-sight orders issued against him, and so I confess to the murders myself.

This is when you need to take your InstantIQBooster tablets, since the plot gets thicker and more complicated than a person of normal intelligence can understand and appreciate. Fortunately, Anjali (Priyamani), the girl I am in love with, makes up for it by wearing lesser and lesser clothes, which is quite simple for a person of normal intelligence to understand and appreciate. We would've liked to simplify it much more, but there's only so much simplification the stupid Censor Board will allow.

Well, I think you should watch the movie - we made plenty of it. Some of you might complain that you find the gore too much, but remember that there are lots of kids in Africa who never get enough gore. As for me, if everything before this movie was one phase in my career, this is another. Sure, you hear that line in every Tollywood pre-release interview of every actor who has even a walk-on part, but I have rehearsed it better.

Priyamani just won a national award, and this one is aimed at showing, ahem, a lot more of the stuff she's made of. Also, our movie has songs and all - if you like any of them, you can take credit for composing it. Just don't sit in the end asking yourself if all the scenes make sense in retrospect - we already got your money. Remember, Hare Ram is very close to Govindaa Goovinda.
Share. Save. Connect.
Tweet
HARE RAM SNAPSHOT

RATING
9
sriki on 24th Jul 2008, 11:36pm | Permalink
Hey i havent watched the movie yet but listened to the songs. And u have to give credit where it is due. The songs are simply refreshing and so are the lyrics by the genius shastri. The reviewer bashed even the music of this film which i dont agree with at all. My pick in the songs..'Ya khuda zara dekhona.." ...sweet number!!

user on 22nd Jul 2008, 2:17pm | Permalink
Movie was made with an intresting plot and the twists in the second half are good...music is simply good

But with a little care in comedy , agripping screenplay and fast editing might have increased the range of the movie...

RATING
8
Lucifer on 21st Jul 2008, 4:50pm | Permalink
Hare Krishna, I knew someone would point that out. This place does not have an Edit feature (yet?) ;). Then again I do not get paid to write reviews to be grammatically correct all the time, do I? :-p
Hare Krishna on 20th Jul 2008, 9:46am | Permalink
@Lucifer: tut tut, making a grammatical mistake while correcting grammar? It should be "my identical twin Ram and I..."
Lucifer on 20th Jul 2008, 3:49am | Permalink
I know this is nitpicking but one does not expect a faux pas on grammar from fullhyd.com:

ADVERTISEMENT
This page was tagged for
hare ram telugu movie songs
telugu hare ram naa songs
hare ram hare ram in telugu pdf
Hare Ram telugu movie
Hare Ram reviews
Follow @fullhyderabad
Follow fullhyd.com on
About Hyderabad
The Hyderabad Community
Improve fullhyd.com
More
Our Other Local Guides
Our other sites
© Copyright 1999-2009 LRR Technologies (Hyderabad), Pvt Ltd. All rights reserved. fullhyd, fullhyderabad, Welcome To The Neighbourhood are trademarks of LRR Technologies (Hyderabad) Pvt Ltd. The textual, graphic, audio and audiovisual material in this site is protected by copyright law. You may not copy, distribute, or use this material except as necessary for your personal, non-commercial use. Any trademarks are the properties of their respective owners. More on Hyderabad, India. Jobs in Hyderabad.