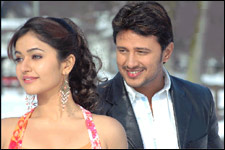 EDITOR RATING
5.0
Performances
Script
Music/Soundtrack
Visuals
NA
NA
NA
NA
Suggestions
Can watch again
NA
Good for kids
NA
Good for dates
NA
Wait for OTT
NA
Watching Veduka is like squeezing dry sponge. There’s nothing that comes out of it, but you don’t regret doing it. (And fullhyd.com’s R&D department has proven that there is no living person who will not squeeze a piece of dry sponge if it is within 1 metre distance, as long as it is clean and previously untouched by Arjun Singh.) And coming as it does after a really long drought of pure romances in Telugu cinema, it just might do the trick for you if you are submissive enough.

It’s easy to summarize the story of Veduka in 1 sentence, but cleanliness is next to godliness. If you did not understand that, it’s okay – we’re just trying to be like the hero of this movie, who has a proverb for every occasion, and sometimes upto 10. Aside of his penchant for putting profound fundas to innocent young girls who get confused after just the first word, however, Srikar (Raja) is the ideal bachelor – he is good-looking, he has value systems that include treating women as divinity, he earns Rs. 1 lakh per month (it must be CTC, we think), and he saves kids falling off terraces (any kid, any terrace - Srikar).

He also meets the most important requirement for being an ideal bachelor – he stays in the top portion of a house that has a bombshell staying in the ground floor. Indeed, what can be more ideal for a bachelor than that?

However, Harini (Poonam Bajwa), who stays downstairs with her grandfather (K Vishwanath) and mother (Sudha), is a pretty irreverent girl who thinks men are lustful animals who have nothing but sex on their minds. We at fullhyd.com completely disagree with that sentence – or at least with the part “on their minds”. Men have sex on lots of other things, too!

However, Srikar is a revelation to her. He is not interested in her body at all. Worse, he is not interested in her mind, either. Nothing can be more insulting to a girl. She tries her best to get him thrown out of the portion by her mum and granddad, but they only end up liking him more. And when he finally lectures her on the virtues of true Telugu womanhood, she too flips for him. Just remember not to try this yourself – this scene has been written and enacted by trained professionals.

Srikar too falls in love with her, but he wants to propose to her only when he feels she is truly in love with him. The two then keep dating and all that stuff, and nothing much happens till the end of the movie, when they just get married. Yes, like we said, there’s nothing much in the movie – it’s a tale of courtship stretched to the length of a full movie.

However, that’s no reason to grind any axe. The film is easy on you, and is perhaps the kind of movie you want to watch – no one gets into trouble, there’s light-heartedness all along, the pair on screen looks good, and the couple have not expressed their feelings for each other but are obviously in love, resulting in the fun of a tale with prolonged mutual courtship. The cast has professionals and experienced actors, so it’s not one of the B-grade college romances launching new faces. The visuals are fairly okay, too.

There’s, however, not much detail in the romance, or great innovativeness in how individual scenes are conceptualized – think the courtship of Hum Aapke Hai Kaun, for instance, where there’d be a huge grin on your face even when you were sitting all by yourself and watching it. The characters in Veduka say more than they ought to (especially the one played by Raja), and some scenes/actions are illogical or meaningless. The whole insert with Anu Mehta, for instance, looks like it came in to fill up the reels. The comedy tracks too don’t set your glands on fire.

Raja and Poonam are both good, and share decent good onscreen chemistry. All performances entertain. The music is pretty ordinary, though. The film is worth a dekko if you want to watch a soft romance – there’s nothing else in Telugu to watch, anyway.
Share. Save. Connect.
Tweet
VEDUKA SNAPSHOT

See Veduka full details
VEDUKA USER REVIEWS
1 - 6 OF 6 COMMENTS
POSITIVE  |  NEGATIVE |  NEWEST  |  OLDEST  |  MOST HELPFUL  |  LEAST HELPFUL
USER RATING
7.0
36 USERS
Performances
Script
Music/Soundtrack
Visuals
NA
NA
NA
NA
Can watch again - NA
Good for kids - NA
Good for dates - NA
Wait for OTT - NA
Dr.No on 12th Jun 2007, 1:50pm | Permalink
Actually I was searching for something which is less than 1 star but I didnt find any..this movie is "PURE SHIT" ..There is nothing absolutely..n please dont go by the movie review or the comedy scenes shown in the trailer(ye moorthi thing),it is the only scene in the movie which we are supposed to laugh at but we cant.
RATING
2
Pr on 8th Jun 2007, 6:58pm | Permalink
Has it ever occured to you guys that you might be trying too hard to be funny? Do the editors at fulhyd consider humor as an absolute prerequisite for writing a film review and force you to write like this?

ADVERTISEMENT
This page was tagged for
Veduka
Veduka telugu movie
Veduka reviews
release date
Raja, Poonam Bajwa
Follow @fullhyderabad
Follow fullhyd.com on
About Hyderabad
The Hyderabad Community
Improve fullhyd.com
More
Our Other Local Guides
Our other sites
© Copyright 1999-2009 LRR Technologies (Hyderabad), Pvt Ltd. All rights reserved. fullhyd, fullhyderabad, Welcome To The Neighbourhood are trademarks of LRR Technologies (Hyderabad) Pvt Ltd. The textual, graphic, audio and audiovisual material in this site is protected by copyright law. You may not copy, distribute, or use this material except as necessary for your personal, non-commercial use. Any trademarks are the properties of their respective owners. More on Hyderabad, India. Jobs in Hyderabad.