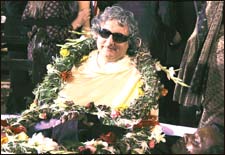 Samrat Sharma / fullhyd.com
EDITOR RATING
3.0
Performances
Script
Music/Soundtrack
Visuals
NA
NA
NA
NA
Suggestions
Can watch again
NA
Good for kids
NA
Good for dates
NA
Wait to rent it
NA
If you have decided to watch Buddha Mar Gaya, I assume it is because you are a fan of one of two things: crass sex comedies or Rakhi Sawant (make those three things, then). If you couldn't care less about Le Sawant Terrible's antics, then I cannot urge you in strong enough terms to stay away from the area that has cinema halls playing Buddha Mar Gaya. But if you do love these things, then boy howdy, are you in for a treat.

Buddha Mar Gaya has a huge syringe dripping at the sight of Rakhi Sawant, an old man dying while having sex with her, a man who specializes in providing dead bodies, and a swami who lusts for men and women alike. Yes, from the moment the titular Buddha bags it, the film is a long and tiresome journey of sexual innuendo disguised as humor, and a parade of characters running about after money and Rakhi, half of which has become the staple of Hindi movie comedies since Priyadarshan did Hera Pheri.

The story and screenplay have been credited to two different people. That means if the film's funny parts were divided equally amongst them, they are both responsible for zero. Putting in talented actors like Om Puri, Paresh Rawal, Anupam Kher and Ranvir Shorey is at least one thing that the director did right, but with the exception of Shorey, the others have been in some stinking ones, and hoo, is this one big mass of stinky poo or what.

Kher plays Laxmikant Kabadiya, a sort of reprisal of his role from Dil, at least in name. His group of industries is about to go public in two days, and the IPO is worth Rs. 5,000 crores, which would make him the richest man in the world. He has a huge family, a twin sister, two sons, their wives, 3 grandchildren... as much as it takes to have a huge crowd of characters to run around in the name of comedy, actually.

The night before the IPO opens, LK (the Buddha, if you haven't guessed yet) dies while having sex with, yup, Rakhi Sawant, an aspiring actress, being promised a lead role in return. The family is terrified that no one will buy the shares once this news gets out. On consultation with Vidyut Baba (Om Puri), they decide to keep this a secret till the shares are all sold out.

To the film's credit, it does not remain the one-track hide-the-dead-body gag forever, and some innovative twists see comedy being generated anew. Every time the family decides to tell the world about LK's demise, something or the other happens, and they have to improvise and announce somebody else's death. This requires them to procure a fake dead body via Ranvir Shorey, and stage fake funerals, with LK in full attendance.

The dialog is fresh and crisp in some of these moments, too, but somewhere in the middle the film remembers that it has to be a gross-out comedy, and out goes all the fun. The movie's story also has room for a greedy servant (Paresh Rawal), ministers, crooked cops, paparazzi, and some infighting between the family members. Sometimes I think maybe we should applaud such a self-aware film, that inherently knows that is what it wants to be, and makes fun of itself.

But then better sense prevails, and I remember the endless rockets that take off every time Rakhi Sawant hefts her cleavage. No, really. The kind of comedy this film sets out to create is not the sort you can watch with a light mood, as it does go into very morbid dark humor. It's a pity it can't sustain the mood, and the ham-handed acting lets everyone down. Puri, Kher, Rawal; they are all forces to be reckoned with when they are given roles with meat. But they can be cruelly hammy when it's all about the money. Oh, sweet irony.

The film is directed by Rahul Rawail, the man who gave us gritty films like Arjun and Dacait, but also did comedy gems like Biwi O Biwi. I have nothing but fondness for these films, but holy bad cinema Batman, is this flick putrid or what? This is exactly the kind of movie that Rawal must have feared he would have to make after his fall from grace.

I can't say I didn't know this film would be largely unfunny. But I didn't realize it was going to be such a colossal waste of talent as well. Fans of any of the actors being top billed in the film should avoid this, though any fans of Rakhi Sawant, besides getting their heads examined, should queue up for this woeful film.
Share. Save. Connect.
Tweet
BUDDHA MAR GAYA SNAPSHOT

ADVERTISEMENT
This page was tagged for
buddha mar gaya download
Budha margya full movie download in hindi
Buddha Mar Gaya movies download
buddha mar gaya movie download
Buddha Mar Gaya movie download
Follow @fullhyderabad
Follow fullhyd.com on
About Hyderabad
The Hyderabad Community
Improve fullhyd.com
More
Our Other Local Guides
Our other sites
© Copyright 1999-2009 LRR Technologies (Hyderabad), Pvt Ltd. All rights reserved. fullhyd, fullhyderabad, Welcome To The Neighbourhood are trademarks of LRR Technologies (Hyderabad) Pvt Ltd. The textual, graphic, audio and audiovisual material in this site is protected by copyright law. You may not copy, distribute, or use this material except as necessary for your personal, non-commercial use. Any trademarks are the properties of their respective owners. More on Hyderabad, India. Jobs in Hyderabad.