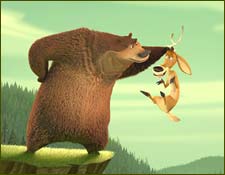 Samrat Sharma / fullhyd.com
EDITOR RATING
6.0
Performances
Script
Music/Soundtrack
Visuals
NA
NA
NA
NA
Suggestions
Can watch again
NA
Good for kids
NA
Good for dates
NA
Wait for OTT
NA
Open Season would be far from the first animated film tackling the subject of domesticated animals returning to the wild, and if the recent spate of assembly-line animated movies are anything to go by, hardly the last. The film is a funny, yet repetitive romp through the wild, and a promising debut from Sony's newly setup animation division.

See, the problem I have is not actually with the movie at all. Directly, no. Remember Lion King? Remember Toy Story? Those were important, watershed films that were crafted with wit, warm humor, genuine emotion and, most importantly, love for the medium. While Pixar has gone from strength to strength, even earning a much deserved Oscar or two, they also opened the floodgates for animated features.

Even so, making an animated feature was an expensive affair for a long time. With the advent of faster, better technology for cheap - and this is important - studios started realizing that all they need is star actors to voice a cute, fuzzy animated story about anthropomorphic animals, and the kids will come.

The kids did come. In droves, too. While this all makes perfect business sense, and it makes up for the lack of good animated features to watch as well, as between two Pixar or Dreamworks films would be a gap of about two years, this has also led the studios along the path of least resistance. And that is where Open Season with its rambunctious moments and an enthusiastic cast goes astray. The film takes the path of least resistance.

Taking a sheaf of pages from other animated films, especially Shrek, Madagascar and Over The Hedge, the film trots along nicely, and if it doesn't seem the least bothered with the effort of making it funny or emotional, it has enough charm to pull that one off.

The main characters are, with Shrek-like camaraderie, a big surly bear named Boog (Martin Lawrence), and a fast-talking, clingy deer, Elliot (Ashton Kutcher). Boog has lived with forest ranger Beth (Debra Messing) since he was a cub, but a a mini-mart raid gets him transferred to a remote forest area. Boog and Elliot are now trying to get home, while being stalked by the trigger-happy hunter Shaw (a deliciously sinister Gary Sinise).

Boog and Elliot meet different forest creatures, and are mocked, helped, and mostly bullied along their way back home. Someone in the team of the screenwriters imagined that having ethnically diverse accents for the animals will give them more character, but when you don't get the reference (I can't tell the difference between a Brooklyn accent and a New York accent, really), or worse, don't seem bothered by it, you realize it's started going downhill. Lamentably, what they don't realize is that the small touches, like the teddy bear that Boog carries around, are the ones that add depth to the characters, and make the film that much more vibrant.

In stark contrast to the cultural mish-mash are the funny moments, which work best with the secondary characters, and start to liven up the proceedings. Since most of these films end up being family outings, there are some scatological jokes thrown in for the adults, but that's just in bad taste.

All in all, Kutcher has an infectious charm as Elliot, and that warms you up to the humor, and then the film lets go. It's a great ride for a while, and most of the jokes, even if some are old and some plain potty humor, just start to go with the flow.

The quest to return home lacks the gravitas and finesse of the journey in Finding Nemo, or the adventure of Shrek. It serves its purpose as a plot point and a bearer of jokes, and is content being that. The third act picks up again where the whole forest teams up against the hunters. The ensuing battle between the animals and the hunters is inspired and is a rousing piece of spectacle, and serves as Sony's fledgling team's big moment. This is the money shot, and they waste no time getting it right.

Speaking of which, the animation and the art style are superb, and service the fight between the hunter and the hunted very well. Even early on, the initial establishing shots of the forest are breathtaking. Other than the Art department, the cast does a uniformly good job of pulling together an otherwise weak script, and make us look forward to the next curve in the ride.

Open Season is an enjoyable film, with some great moments and excellent allround art, but with animated films becoming so frequent in their releases, mediocrity in any department can hurt a film. Open Season loses points for being very similar to Over The Hedge and Madagascar or even Dr. Dolittle 2, but does not really disappoint as a kid-friendly feature. It has some great moments and some nice touches that make the experience enjoyable, but unfortunately all that is hidden underneath all the loud exterior that the film sports.

ADVERTISEMENT
This page was tagged for
Open Season english movie
Open Season reviews
release date
Martin Lawrence, Ashton Kutcher
theatres list
Follow @fullhyderabad
Follow fullhyd.com on
About Hyderabad
The Hyderabad Community
Improve fullhyd.com
More
Our Other Local Guides
Our other sites
© Copyright 1999-2009 LRR Technologies (Hyderabad), Pvt Ltd. All rights reserved. fullhyd, fullhyderabad, Welcome To The Neighbourhood are trademarks of LRR Technologies (Hyderabad) Pvt Ltd. The textual, graphic, audio and audiovisual material in this site is protected by copyright law. You may not copy, distribute, or use this material except as necessary for your personal, non-commercial use. Any trademarks are the properties of their respective owners. More on Hyderabad, India. Jobs in Hyderabad.