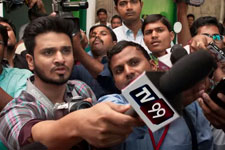 T J Reddy / fullhyd.com
EDITOR RATING
4.0
Performances
Script
Music/Soundtrack
Visuals
5.0
4.0
3.0
3.0
Suggestions
Can watch again
No
Good for kids
No
Good for dates
No
Wait for OTT
Yes
A man woke up at 7 am. He brushed his teeth, took a bath, ate his breakfast, said goodbye to his wife, drove his car to his office, and started working on a project that would change the course of his company. A few months later, he pitched his plan to the board of directors. They opposed his ideas right off the bat. However, the man convinced every person on that panel on the merits of his thoughts.

Soon the company saw profits like never before. The man still wakes up at 7 am, brushes his teeth, takes a bath, eats his breakfast, and lives with his wife. But now, he does all these in a bigger house. The more things change, the more they stay the same.

This sequence of events is a plot. We know that there is a man, and we know about his routine, but we are not made privy to who he is as a person. Who is he, and why should we care about him?

Arjun Suravaram's plot is that of the wrongful accusation of an innocent reporter of a crime. Arjun (Nikhil Siddharth) is arrested for being a part of a group that uses fake certificates to solicit loans from banks. However, he fights back against the police, the media, the system and the government to bring the real criminals to justice. He enjoys his life as a journalist, and he will stick to it come what may.

However, we ask the question, "Who is Arjun Suravaram, and why should we care about him?"

In a script, the reasons to care about a character come in the form of a story. While the plot puts a person through a series of events, a story shows us the emotional growth a character undergoes as a consequence of those events. This growth helps an audience identify with the humanity of a character. With Arjun Suravaram, writer-director T Santosh gives us a seemingly intriguing plot filled with twists, turns, double and triple crosses, but never gives us a reason to care about any of these happenings.

We need but one scene to fully explore the depth of this movie (spoilers ahead). A government school collapses as a direct result of poor engineering. 43 children perish as a result of this incident. The script picks a specific child as a conduit to help the audience connect with the tragedy. This child is always smiling, super helpful, topper of the class, and has a cute baby voice. This is the perfect child. So, an audience should ideally feel bad when such a good child becomes a victim. Wrong.

An audience may not connect to this child for the same reasons the audience may not connect to the title character. These people are saintly beyond the realm of possibility. Who are these people beyond these vague platitudes? Is it an indictment on the audience when a filmmaker thinks that they wouldn't care about a person if he/she had any negative aspects to them? Why does the film operate in a world that is wholly black and white when our reality is abundant with multiple shades of grey? If the main character has Lenin as his middle name, why is this film and its business a part of a capitalistic system? Why does a plot that is so heavily focused on the media never adequately criticize opinion-based journalism, editorializing of the news, and how that affects discourse of political topics?

These are the questions you ask when you finds no emotional investment in a story. These philosophical questions soon make way for plot-related grievances. For example, how does a man with such a singular name end up with his records forged? Or, why does our hero try to scurry away from the baddies stealthily when it is made abundantly clear in the next scene that he could just beat them up s*its and giggles? Or, why don't the cops keep our hero in custody after he confesses to multiple homicides? Did the filmmakers think of cool scenes without ever considering how the film gets there? We genuinely don't have the patience of Mother Theresa to sit with the filmmakers and pick their brains about their intentions because Father Time already took 140 minutes of our life that he will never give back.

T Santosh's good intentions are evident as we observe him toe the line of an unwritten moral code. However, his movie refuses to follow the very well-documented language of cinema. Simple editing choices such as dead air left open for a joke to land, standard blocking techniques, the 180-degree rule and lip-syncing are all broken quite regularly. They create more of a sense of distance and disorientation from the plot unfolding on-screen than the multiple abandoned sub-plots scattered across the film.

With almost every element of the movie being below par, in one way or another, the loud background score and shrill sound mixing stood no chance of saving this film from being an earnest yet mediocre exercise.

Speaking of the importance of being earnest, Nikhil Siddharth doles out one of the most "earnest" performances we've seen all year. He is friendly and kind and excellent and tenacious and smart and loving and cunning, and lest we forget, earnest. He seems to have carefully picked out an expression for each of his qualities, and ensures that he repeats those exact expressions every time the film calls for it. However, every single one of those choices comes off as a man acting as a character than a man living a persona. Except for Vennela Kishore, who delivers a surprisingly well-balanced performance, every other actor seems to be playing a version of a character they've played before to lesser effect.

And that is Arjun Suravaram in a nutshell. It has a brand new plot narrated to us with a very familiar story. We've seen a manchodiki manchodu, chala manchodu solve social problems before, and we'll see him do it again, but the effect that it has on an audience will wane with every rehash of the same story.

The statistics we see in the news or read about online rarely affect us simply because we aren't connected to them emotionally. We feel good or bad, depending on the overall nature of the story. However, the news exits our system akin to the lunch from the day before. If you still aren't convinced about the need for an emotional quotient when telling a story, we would ask you if you remember anything about the unnamed man's story from the start of this long-winded review.
Share. Save. Connect.
Tweet
ARJUN SURAVARAM SNAPSHOT 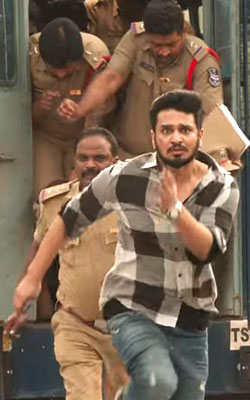 ADVERTISEMENT
This page was tagged for
arjun suravaram full movie download
Arjun suravaram today's pk
arjun suravaram movie download movierulz. co.
Arjun Suravarammovierulz
arjun suravaram full movie in telugu
Follow @fullhyderabad
Follow fullhyd.com on
About Hyderabad
The Hyderabad Community
Improve fullhyd.com
More
Our Other Local Guides
Our other sites
© Copyright 1999-2009 LRR Technologies (Hyderabad), Pvt Ltd. All rights reserved. fullhyd, fullhyderabad, Welcome To The Neighbourhood are trademarks of LRR Technologies (Hyderabad) Pvt Ltd. The textual, graphic, audio and audiovisual material in this site is protected by copyright law. You may not copy, distribute, or use this material except as necessary for your personal, non-commercial use. Any trademarks are the properties of their respective owners. More on Hyderabad, India. Jobs in Hyderabad.