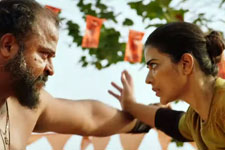 Neema Pramod / fullhyd.com
EDITOR RATING
4.0
Performances
Script
Music/Soundtrack
Visuals
6.0
3.0
5.5
4.0
Suggestions
Can watch again
No
Good for kids
No
Good for dates
Yes
Wait for OTT
No
Everyone loves a good romance. There is a reason why DDLJ ran in Maratha Mandir for 20 years - we love to see people fall in love. But the problem is, we have completed over 100 years of cinema, and have perhaps seen almost all the different ways in which love happens - love at first sight, love born because opposites attract, hate turned love, love after marriage, baava-maradalu love... we have seen them all. We want something new.

In order to give us this "something new", our films usually take either of these two paths. First, by coming up with innovative ways to tell the same story, like how Pelli Choopulu put a whole new spin on the opposites attract theme. The other way is to fuse the romance with a different genre - romance and crime, romance and action, romance and horror etc.

Miss Match chooses the second path, but it is not content with just one specific genre. As a result, we end up getting a romance that is also part family film, part sports drama, part action and part socially conscious film. The problem is that these parts do not fit together seamlessly, resulting in an utterly, um, "miss-matched" film.

Siddharth aka Siddhu (Uday Shankar) is a soft-spoken, environmentally conscious techie from an IIT. Mahalakshmi is a brazen, kind-hearted wrestler who is training to participate in the Asian Games. Siddhu's family is sophisticated, traditional and conservative while Mahalakshmi's family is loud, progressive in the way they treat Maha, and quick to anger.

Maha and Siddhu fall in love at a Youth Summit. But things go wrong when the two families come face-to-face, and the relationship is called off. We all know what will happen next, and the film does not surprise.

It is hard to completely dismiss Miss Match, for some of its intentions do feel like they are coming from a right place. Though the story of how Maha became a wrestler has a severe Dangal hangover, it does create a space for a relevant discussion. The way Mahaa's father responds to Siddhu's family when they demand that she quit wrestling is indeed worthy of applause ("Your son will get to keep the career he toiled day and night to build, but my daughter has to give up the sport to which she has dedicated her entire life?")

However, it is not just enough to want to say the right things - you must mean them, too, for it all to feel genuine. The movie claims to be a story of women empowerment but ends becoming all about the hero as usual. Maha is callously sidelined in the second half as Siddhu stylishly walks in to save her father and her village from a cement factory that poses a potential threat to their agriculture. Maha begins to get "distracted" from wrestling due to Siddhu, starts dressing more "like a woman", and forgets her wrestling ability and jumps up and down in glee while Siddhu (a mere techie, remember?) single-handedly bashes up all the goons after them. She is also a given a chance by Siddhu's family to "learn how to be a woman".

Even the shoddiest of scripts can be turned into something appealing if executed well. But Miss Match is a shoddily made film as well. It is less a movie and more a series of random scenes haphazardly strung together. After a cringe-worthy but passable first half, the second half turns into an absolute mess - as though the makers didn't know how to take the story forward. Everything feels like it is happening in fast-forward, yet the pace feels unbearably slow. The wrestling portions do put you on the edge of your seat for a bit, but soon you slump back again. And the tacky visuals are like salt on a sore wound. However, Gifton Elias does gift us (no pun intended) with a few good tunes.

Despite everything if the movie remains even slightly watchable, it is because of Aishwarya Rajesh. Though you do wonder why the Tamil actress chose this as her second Telugu film after a wonderful debut in Kousalya Krishnamurthy earlier this year, she is the one who holds the film together. She manages to add shades to her one-note character, making Maha less annoying and grating than she would have become in the hands of another performer. Uday Shankar is earnest but feels wooden most of the time. Among the others, only Pradeep Rawat makes an impression as Maha's father whose eyes are filled with dreams for his daughter.

Though it tries to be more than just a love story, Miss Match ends up doing no justice to any of the themes it chose to address. Suffice to say that you are better off swiping left for this match - there isn't much here.
Share. Save. Connect.
Tweet
MISS MATCH SNAPSHOT 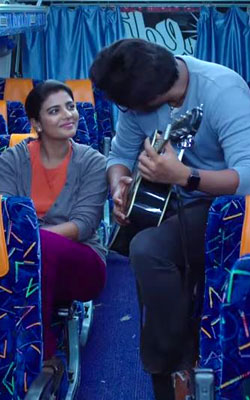 ADVERTISEMENT
This page was tagged for
telugu movie with mahalakshmi wrestler
miss match telugu movie
Miss Match telugu movie
Miss Match reviews
release date
Follow @fullhyderabad
Follow fullhyd.com on
About Hyderabad
The Hyderabad Community
Improve fullhyd.com
More
Our Other Local Guides
Our other sites
© Copyright 1999-2009 LRR Technologies (Hyderabad), Pvt Ltd. All rights reserved. fullhyd, fullhyderabad, Welcome To The Neighbourhood are trademarks of LRR Technologies (Hyderabad) Pvt Ltd. The textual, graphic, audio and audiovisual material in this site is protected by copyright law. You may not copy, distribute, or use this material except as necessary for your personal, non-commercial use. Any trademarks are the properties of their respective owners. More on Hyderabad, India. Jobs in Hyderabad.