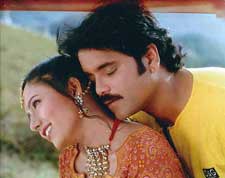 EDITOR RATING
5.0
Performances
Script
Music/Soundtrack
Visuals
NA
NA
NA
NA
Suggestions
Can watch again
NA
Good for kids
NA
Good for dates
NA
Wait to rent it
NA
First things first. The film comes on the heels of the super-success of Nuvvu Vastaava, made by the same producer - R B Choudhary. It is but natural that he would want to cash in on the craze generated by his earlier film. And so he does a quickie by remaking a Tamil film with a novice filmmaker, Shinde. The result is a film that goes haywire from the word go.

In this flimsy plot, Kalyan (Srikanth), a bank manager, is the offspring of the marriage between two persons belonging to different castes (father Chandramohan is a Naidu and mother Sangeeta, a Brahmin). The director makes us believe that because of their parents' inter-caste marriage, prospective brides back out despite his position. While their attempts at finding a bride make no headway, he is transferred to a village called Pattiseema.

In this remote corner of the West Godavari district, while all the others hanker for loans, the beautiful local belle Meghamala (Soundarya) partakes of his domestic duties and ensures that he is well looked after. A couple of incidents later, our hero comes to the conclusion that she is definitely in love with him, and so proposes to her - only to be rebuffed. She claims that she has done all this "for your eyes only", and tells him not to harbor any amorous intentions.

Soundarya narrates to the shattered Srikanth how his eyes are not his but her lover's (Nagarjuna) who had donated them to him when the latter lost his life, and the former lost his eyes in a freak accident some months back. An understanding Srikanth feels that it is all the more important to marry her now than before. And he begins to woo the heroine with renewed enthusiasm.

The film drags on and on without any sense of direction, and the so-called comedy essayed by Rajendra Prasad is drab to the core, as is the rest of the film. The relationship shared by Nagarjuna and Soundarya in the film is a consolation of sorts (if one can call that) for the tired and weary audiences. Neither the treatment nor the songs make any impression. The tunes are a lift from Nuvvu Vastaavani, and so is the choreography. Need I tell you whether you should see the film or not?
Share. Save. Connect.
Tweet
NINNE PREMISTA SNAPSHOT

ADVERTISEMENT
This page was tagged for
Telugu Ninne Premistha movie
ninne premista telugu movie
Ninne Premista telugu movie
Ninne Premista reviews
release date
Follow @fullhyderabad
Follow fullhyd.com on
About Hyderabad
The Hyderabad Community
Improve fullhyd.com
More
Our Other Local Guides
Our other sites
© Copyright 1999-2009 LRR Technologies (Hyderabad), Pvt Ltd. All rights reserved. fullhyd, fullhyderabad, Welcome To The Neighbourhood are trademarks of LRR Technologies (Hyderabad) Pvt Ltd. The textual, graphic, audio and audiovisual material in this site is protected by copyright law. You may not copy, distribute, or use this material except as necessary for your personal, non-commercial use. Any trademarks are the properties of their respective owners. More on Hyderabad, India. Jobs in Hyderabad.